MONROVIA, Montserrado â€“ Officials in Margibi are currently arguing their case before the Supreme Court over the controversial allocation of US$1 million in county and social development fund due to be remitted to the county by the Ministry of Finance and Development.

The amount was made available by China Union. China Union, through a 25-year Mineral Development Agreement to extract iron ore from Bong, agreed to pay through the central government US$3.5 million annually to be remitted to the affected counties, including Margibi.

Between 2015 and 2018, the company owed the counties US$10.5 million in remittances. But the three legislative caucuses had accepted a request from the company to waive US$6.5 million to compensate for the slowdown in its operations, which coincided with a global decrease in the price of commodities. According to the company, such waiver would allow it to immediately remit the remaining US$4 million to be distributed among the counties. Bong would receive US$2 million, while Margibi and Montserrado would receive US$1 million, each.

Following the lawmakersâ€™ acceptance of the request, China Union recently made available the US$4 million to the central government. For Margibi, the US$1 million was not considered during its annual council sitting, which was held on November 14, 2018. The council sitting is when stakeholders from all over the county meet to allocate the funds.

A document recently leaked to the public showed that the countyâ€™s superintendent, Jerry Varnie, and members of the legislative caucus, except Senator Oscar Cooper, met in Monrovia on June 13 in what they referred to as â€˜special county sitting,â€™ presided over by the chair of the caucus and the countyâ€™s fourth district representative, Ben Fofana.

According to a resolution in the possession of The Bush Chicken, the officials agreed that the US$1 million would be spent on project overhead and development priority projects that would be identified by the five electoral districts after district council sittings were held.

Superintendent Varnie signed the resolution on behalf of the local county administration, while Rep. Fofana signed for his district and the caucus. Except for Cooper, the rest of the countyâ€™s lawmakers also signed the document. They include Margibiâ€™s first and second district representatives, Tibelrosa Tarponweh and Ivar Jones, respectively. Others were Senator Jim Tornonlah and Representatives Ellen Attoh-Wreh and Clarence Gahr of the third and fifth districts, respectively.

Eight other individuals who attended the controversial sitting and who signed on behalf of their respective districts as delegates were either local officials or individuals connected to the lawmakers. They include the countyâ€™s assistant superintendent for fiscal affairs, Aloysius Narmue; Aaron Weetor, a resource officer in the office of Rep. Clarence Gahr; the project management committee chairman, Thomson Nanah; and the project management committee controller, Baysah Kollie.

Officials of the District Development Committee are usually those who have supported or have worked on the campaigns of representatives. But delegates to the county sitting by law are not individuals compromised or working at the will of lawmakers.

The officials agreed on a special allocation of US$50,000 or five percent of the total amount to be made to communities most affected by the mining activities, for projects that will enhance the recovery of lives and other damages caused by the mining operations.

They also agreed to allocate US$108,000 to what they termed as â€˜project overhead.â€™ That, according to the resolution, includes a US$57,000 allocation for operations of the Project Management Committee and US$38,000 for operations of the county administration. Other appropriations include a US$8,000 special allocation to Mboo Statutory District and US$5,000 for support to the media. The officials further agreed to allocate US$168,400 of the remaining amount to each of the countyâ€™s five electoral districts.

The superintendent, according to the resolution, was also authorized during the sitting to ensure that the Ministry of Finance and Development Planning transfers the amount to the countyâ€™s account.

Meanwhile, Cooper, as the only lawmaker who did not participate in the decision, has termed the decisions of his colleague as illegal and petitioned to the Supreme Court for a writ of prohibition against the use of the funds until a regular county sitting is held in the capital city of the county as required by the budget law. 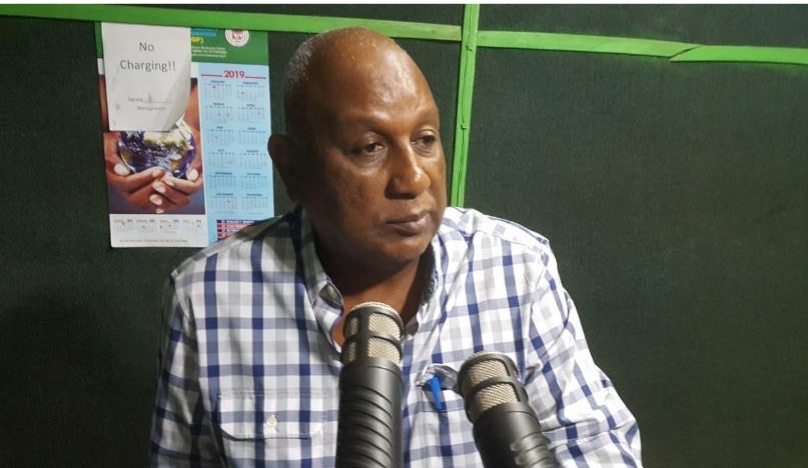 However, the senator said none of these requirements were fulfilled by his colleagues in the case of the â€˜Special County Sittingâ€™. He said in addition to the violations of the law, the officials also refused to serve him any citation for the meeting in Monrovia.

â€œIt contravenes the budget law. [The] budget law says a county sitting must be held in the countyâ€™s capital. Thatâ€™s the law,â€ he said.

Cooper argued that the selection of some of the eight individuals who served as delegates for the â€˜special county sittingâ€™ also violated the law. According to him, the inclusion of the project management committee chair and the assistant superintendent for fiscal affairs as delegates, for example, were proof of conflict of interest, against the lawâ€™s provision.

Officials supporting the â€˜special county sittingâ€™ have used a provision of the resolution agreed upon at the 2018/2019 county sitting held on November 14, 2018, in Kakata as justification for holding the special sitting.

Count four of the November 14, 2018 resolution provided that any other issue or issues arising from the county while the resolution was already in implementation, â€œshall be handled with urgency in a joint sitting of the county administration, county caucus and heads of delegation to this county council sittingâ€.

It also provided that â€œsuch urgency shall be communicated into an internal resolution to the county superintendent for implementation as if it had been adopted by this sitting.â€

But Cooper dismissed the argument, noting that the law takes precedence over the resolution.

â€œAnd that count four â€˜emergencyâ€™, what was the emergency? So, my question and the journalistsâ€™ question should be, why donâ€™t you want your people themselves in their development agenda? Why?â€ he asked.

The third district representative, Attoh-Wreh, defended the lawmakersâ€™ actions in a post on Facebook by arguing that they had to make the decision because they did not have time in their favor.

â€œIt was because we had to make appropriations to present to Finance Ministry to have access to the fund,â€ she wrote.

â€œThere has not been any disbursement yet, and we still need to meet with our constituents for [a] final decision on the projects to be done in the districts.â€

If the intent of the emergency was to source the money from the central government, Cooper also wondered why the officials have refused to hold a county council sitting in Kakata that would be attended by the legal representation of citizens, now that the money is in the countyâ€™s account.

While count one of the June 13 resolution make it emphatic that allotments made at the â€˜special county sittingâ€™ would be spent on project overhead and development priority projects presented by each of the five electoral districts after holding their respective district council sittings, in order to validate the decisions made at the â€˜special county sittingâ€™, Cooper also dismissed that the law provides for any â€˜district council sittingâ€™.

The legislature amended the budget law in 2018 to ensure accountability and increase citizensâ€™ participation in the use of County Social Development Funds. Cooper questioned why his fellow lawmakers who voted to the law amendment have become its violators.

He said even if he had been extended invitation by his colleagues to attend the â€˜special county sitting,â€™ he would have advised them to have a county sitting in Kakata, as the law requires.

He alleged that projects for which funds were allocated during the â€˜Special County sittingâ€™ are campaign promises of individual lawmakers and include no bill of quantities.

Fofana, who chairs the legislative caucus, declined to speak to The Bush Chicken on the allegations.

The Supreme Courtâ€™s justice-in-chambers, Joseph Nagbe, following a conference with Cooper and officials involved in the alleged violation of the law, ordered an immediate injunction against the funds being used until the officials accused can respond to the petitionerâ€™s complaint.

Nagbe also ordered the clerk of the Supreme Court to write the management of GN Bank to freeze the countyâ€™s account until a decision is announced following the courtâ€™s hearing.

Cooper said all he wants is for a county sitting to be held in Kakata to decide on how to use the fund.

The assistant superintendent for fiscal affairs, Aloysius Narmue, told The Bush Chicken that only US$750,000 of the US$1 million had been released to the county by the central government. Narmue refused to comment further on the money and the allegations levied against him and other local officials, on grounds that the matter is currently before the Supreme Court.

But a source close to his office who spoke to The Bush Chicken on conditions of anonymity for fear of being reprimanded said a portion of the US$750,000 has already been disbursed to the administration of Mboo Statutory district.

Superintendent Jerry Varnie and Thomson Nana, who chairs the Project Management Committee, also refused to comment on their alleged violation of the budget law, providing that they could not do so because the matter was currently before the Supreme Court.

Mboo district Superintendent Charles Kallon also told The Bush Chicken that he could not comment to confirm or deny the disbursement of fund to the districtâ€™s leadership.

Authorities at the Finance Ministry have also not responded to The Bush Chickenâ€™s inquiry on the disbursement of the US$750,000, despite promising to provide the information.

Festus Tarpeh, a youth in the county, also accused the officials of violating the November 4, 2018 resolution, which the officials used as their reliance for the selection of delegates.

He said the delegates at the â€˜special county sitting did not reflect a true representation of the people of Margibi, as it is required by the budget law.

The budget law also forbids allocations of administrative costs of the PMC from exceeding 10 percent of funds allocated as County or Social Development Fund. Tarpeh said US$108,000 or 10.8 percent of the US$1 million was allocated as â€˜project overhead.â€™ He agreed with Cooper that the officials need to return to the status quo and convene a county sitting in Kakata.

At the same time, the Margibi Citizens Alliance for Accountability and Transparency, a local advocacy group in the county, says the decision of officials and delegates at the â€˜special county sittingâ€™ contrasted with the priority of citizens.

The chairman of the group, Joseph Orlando Beyan, said the current priorities of citizens of Margibi is supporting C.H. Rennie Hospital, the Kakata City Corporation, and organizations of people with disabilities. However, Beyan said none of these institutions were scheduled to receive funding in the controversial â€˜special county sittingâ€™. There are constant reports of electricity outages at the C.H. Rennie Hospital, while patients are often given prescriptions to procure drugs and medication outside of the facility, because of the shortage of supplies. The city administration of Kakata has also consistently lacked proper logistics to maintain a clean city.