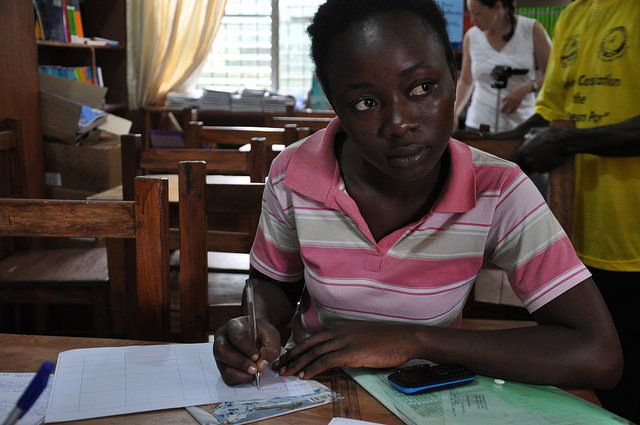 HARBEL, Margibi – A survey of schools in Lower Margibi on Monday, February 16 confirmed that only a very small number have reopened.

Of the schools that adhered to the February 16 reopening date, there were also very low turnouts of students observed on Monday. Amongst schools that resumed normal academic activities in Lower Margibi on Monday are the Harbel Multilateral High School and Firestone School System.

Administrators on Their Schools’ Readiness

According to Fredrick Logan, the Principal of the M.G. Logan Private School in Dolo town, the school is experiencing a very low enrollment this year. He believes the low enrollment is due to the parents’ hesitance to release their children amidst the Ebola outbreak. Logan noted that he may make a major reduction in the staff if the low enrollment continues on its current path.

Nuita Wongbaye, the Principal of the Harbel Assemblies of God Mission High School, said his school was not prepared to reopen until March 2. “We did not resume normal academic activities today because we are still preparing our campus and staff,” he said.

Wongbaye said the school was still continuing its cleanup and students’ registration activities. They would use the rest of February to educate their staff on the new protocols for school operations in the country amidst the outbreak.

Also speaking to the Bush Chicken on Monday was Mark Saysaw, the vice principal for the Dolo Town Public School. He disclosed that the resumption of classes at the institution had not happened due to the lack of instructional materials. He said the school had yet to receive any supplies from the government.

Saysaw criticized the Ministry of Education for giving schools the option to reopen either February 16 or on March 2. According to him, the option not only gives room for poor adherence to policies but it would also unfairly put some schools ahead of others in terms of the academic calendar.

The principal of the Mother of Jesus Christ Catholic School, Stephen Koikoi, admitted that he expected a low enrollment due to parents’ inability to pay the fees. He said parents have complained to him about their lack of readiness to enroll their children at this moment due to the shortage of funds.

Some parents have called on the government to extend the time for the reopening of schools. Joshua Gaye, a father of six, explained that he had been laid off from his job during the Ebola outbreak due to a slowdown in business. He noted that the reopening of schools was too abrupt, especially when the economy had not yet stabilized.

Mamai Kollie, a dry meat seller in Harbel also mentioned that she had gone out of business due to the Ebola situation. She said the situation has severely affected her income. Kollie has not registered her children who were attending private schools prior to the Ebola outbreak in the country. According to her, enrolling her children in a public school was not yet an option, claiming that there were irregularities in the Liberian public schools.

Some students in Margibi say that though there would be challenges, they would adjust to the new educational schedule. Victor Gibson, a student of the Harbel Multilateral High School, expressed his excitement to be back in school after the Ebola outbreak that took the lives of many of his colleagues.

Gibson admitted that things were difficult, and there were challenges involved with the current reopening of schools. However, he was grateful to be alive and to be in school again. He praised his parents for supporting his education and promised to get adjusted to the new calendar and the Ebola preventive measures in the school.

“For me, it’s just a matter of time, but we will get used to the new changes,” he said.

Nancy Fallah, another student of the Firestone School System, noted that her time had been wasted for too long and that the reopening of schools was important. However, she emphasized the need to wait until March to fully open. She said the trauma caused by the virus was still fresh, and most students and instructors would not be fully ready to resume academic works.

According to the new calendar proposed by the Ministry of Education, there would be no first-semester break and the exams by the West African Examination Council for ninth and twelfth-grade students will now be administered in July instead of May. The academic year is expected to end between September and October.

The pronouncement followed the release of the official protocols against the spread of Ebola for the reopening of schools by the Ministries of Health and Education. The rules provide measures to be followed in all schools aimed at sustaining the fight against a further spread of Ebola.

According to the protocols, all schools operating in the country must introduce a heath safety committee to enforce the measures against the spread of Ebola. The committee would consist of the Parents and Teachers Association of the school and a representation of the community and school authorities.