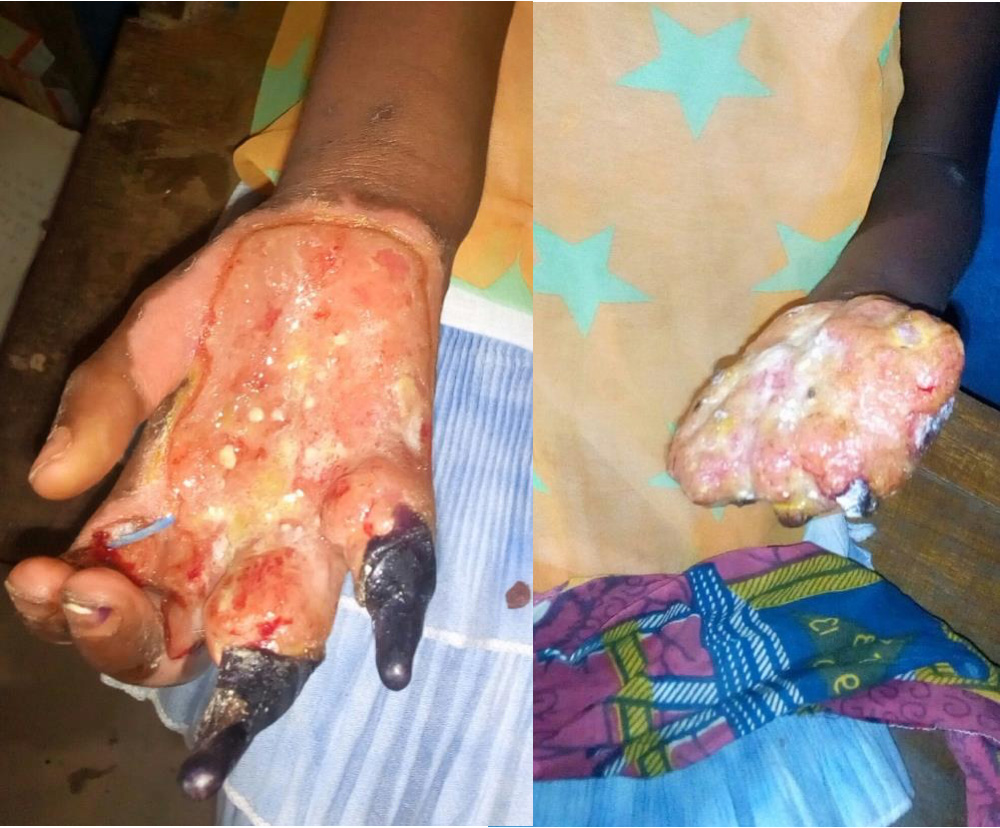 PLEEBO, Maryland â€“ A five-year-old in Pleebo Sodoken Statutory District is experiencing severe pains after having her hands burnt as punishment, allegedly by her aunt.

Armah Geply is reported to have been burnt by her 25-year-old aunt, Patience Doplah, in the Zone 11 community on January 2, 2018. Geply was taken to a health facility for treatment, although her condition continues to worsen.

According to residents of Geplyâ€™s community, the childâ€™s hands and feet were burned by her aunt because the girl had eaten food she was not authorized to eat.

Neighbors, who declined to identify themselves for fear of being thrust into the limelight of a case that has now gained nationwide attention, said when the incident initially took place, Doplah hid the child indoors to avoid drawing attention.

â€œWhen it happened, she was always keeping the girl in the house with her two hands tied with cloths, not even gauze or bandage,â€ said the neighbor who eventually reported the issue to authorities. â€œThe first time I personally asked the aunt, she told me that the girl burnt herself with fire.â€

The neighbor said persistent questions about the childâ€™s conditions directed towards the aunt was a source of palaver because the aunt refused to disclose what exactly happened to the child. â€œSince she could not give me concrete reason for the girlâ€™s burns, I decided to [alert] the police because I feel itâ€™s totally against the childâ€™s human rights,â€ the neighbor said, adding that the government needed to help treat Geply to ensure she does not completely lose her right hand, as her left hand is now gone.

At Pleebo Health Center, where the child was staying, she said had taken the rice to eat because she was hungry, and her mother was not around.

â€œWhen my aunt came and noticed that I ate the food, she told me that I have stolen, and she will deal with me,â€ Geply said. â€œShe held my hands and put it in the fire and later place my feet in the fire.â€ Armah Geply before being taken in for treatment. Photo: George K. Momo

Police have since apprehended the aunt, Doplah. When quizzed by police, she admitted that she had committed the act but said she has no explanation or justification for her behavior.

Her case has been sent to the Pleebo Magisterial Court and she is at the Harper Central Prison, awaiting court trial.

The Independent Human Rights monitor for Maryland, Boniface Nyema, has said his office remains committed to ensuring that justice is dispensed in this case.

â€œI will definitely follow this to the letter and many thanks to The Bush Chicken investigation that brought this issue to the public,â€ Nyema said.

It is my hope that other protection actors here will join me in fighting for justice for the minor.

Geplyâ€™s story claimed the publicâ€™s attention after The Bush Chicken made several posts on Facebook. Now, some diasporan Liberians have been coming to her aid.

One of such is Kartlyn S. Jlaka, a Marylander residing in Columbus, Ohio in the U.S. Jlaka said her heart is heavy and she feels the pains of the little girl. She said she was working with colleagues to fly Geply to Monrovia as soon as possible to seek better treatment, adding that she hopes that they can provide other benefits to the child after she is cured.

â€œI believe in helping people that are really in need and who are suffering, particularly those from Maryland County,â€ Jlaka said.

She is calling on all those concerned with protecting children to ensure that justice prevails.

â€œI am not going to claim the girl, but only want to see her well and be in school. She can be a great woman tomorrow to serve Liberia and the world,â€ Jlaka said.

She added that Marylanders in the diaspora are closely working with local authorities, including Rep. P. Mike Jurry, to ensure that Geply is treated and provided with the resources to live her life to the fullest.

Jlaka has started a crowdfunding campaign to raise funds for Geply to travel to Monrovia for medical treatment.