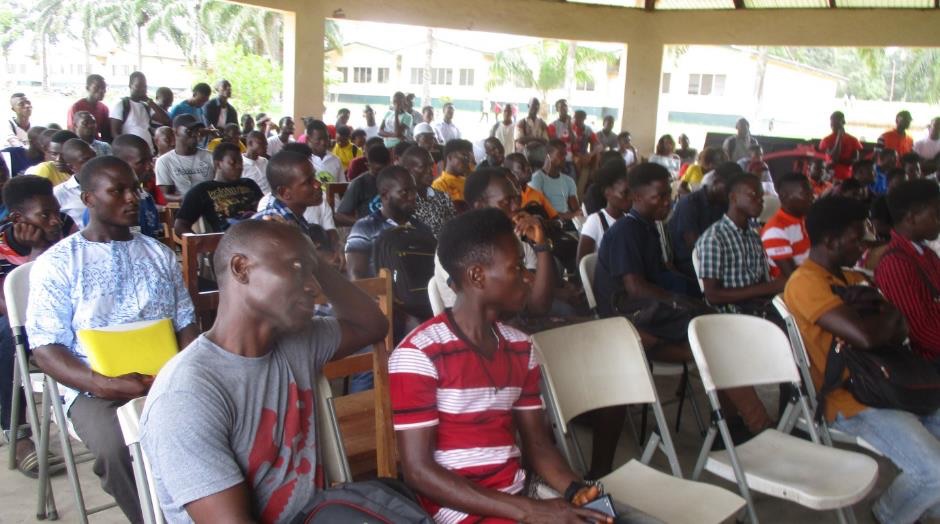 HARPER, Maryland â€“ Marylandâ€™s first district lawmaker, Mike Jurry, has provided a collection of tablets containing electronic books for students of the College of Engineering and Technology at Tubman University.

Jurry disclosed that the e-library, which included eight pieces of equipment, was an initiative he has long worked to achieve for the university since his election as a lawmaker, and as one who also graduated from the college.

â€œWhen I was voted, that has been my thinking upon the conception of the idea to help the university,â€ he said.

He said he had to lobby with citizens of Maryland and some graduates of the institution, now residing abroad, including Henry Wilson currently in the United Arab Emirates.

He said it cost at least US$5,000 to complete the setup of the facility, which contains at least 198 engineering books that will reduce the research challenges of students of the university.

He praised the universityâ€™s president, Elliott Wreh-Wilson, for his commitment and efforts to smoothly steer the affairs of the state-run university. He promised to work with the TU administration for the expansion of the electronic library to include books for students of all colleges in the future.

â€œBeing a graduate of this university, I know some of the challenges here, and one of the biggest challenges here is about the availability of books, particularly for the engineering college,â€ he pointed out.

He challenged engineering students to utilize the opportunity to enhance their studies. â€œRead, read, and read to be knowledgeable on many topics,â€ he stressed.

Professor Isaac Adetunde, the dean of the College of Engineering and Technology, thanked the lawmaker for his support and assistance.

Adetunde, however, requested that the administration make a room available in the newly constructed annex for proper placement of the electronic library. He said the representativeâ€™s donation also adds to a recent donation by the World Bank of 15 computers to support electronic learning.

â€œInside those computers, we have 1,500 entry textbooks. Now, adding these ones to it, [they are] now increasing,â€ he said.

Despite these efforts, it seems that the numerous challenges affecting the university and the Engineering and Technology college in particular still remains unabated.

A student of the electrical engineering department, Redeemer Wonsiah, complained of the constant outage of electricity and insufficiency of instructional staff in the college.

â€œWe are very tired of only two professors or three professors teaching the electrical department of the College of Engineering and Technology,â€ he noted.

He called for the university to reach out to partners and friends in the diaspora to help resolve the shortage of professors in the department.

The universityâ€™s president, Wreh-Wilson, lauded the Harper district lawmaker for being farsighted in taking development to the university. He promised his administrationâ€™s collaboration with other partners and institutions to ensure that the university maintains its prestige by providing quality learning to students.

He also assured authorities of the college that a room would be provided to properly host the e-library.

He also recounted the challenges the university was faced with, including low funding. According to him, the university lost at least US$240,000 in tuition and fees last semester, as a result of President George Weahâ€™s free tuition pronouncement for undergraduate studies.

â€œAnd this semester, the university will again lose the same amount,â€ he explained.

President Weahâ€™s announcement of a tuition waiver has already been linked to worsening sanitary conditions at the University of Liberia in Monrovia. A lack of water in toilets has led to open defecation at the universityâ€™s Capitol Hill campus.

On October 24, 2018, Weah announced that the new policy would immediately take effect at all public tertiary institutions across the country. He said the move was motivated by his discovery that the lack of funds to pay tuition was preventing some students from acquiring education.