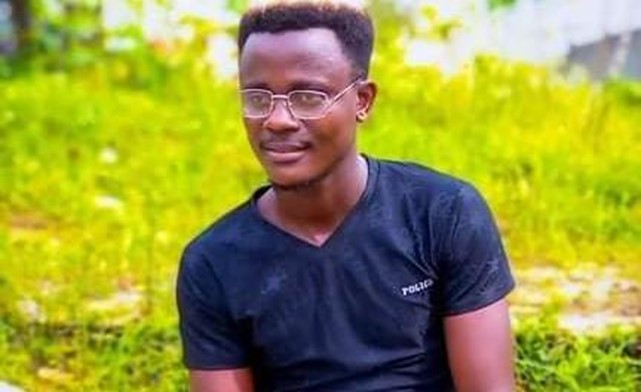 HARPER, Maryland – A 26-year-old resident of Harper has been arrested by the Liberia National Police after he was accused of sharing a nude photo and video of a female student on several social media platforms.

Speaking in an interview with The Bush Chicken in Monrovia, the survivor, also a resident of Harper and a second-year student of the William V.S. Tubman University College, said she received a Facebook message from Raymond Badio, Jr. that he had acquired her nude images from a third party.

The victim narrated that Badio then shared the images with her and demanded that she either give him money or agree to have sex with him to prevent him from posting the photos and videos on Facebook.

“I told him I am not working, and I don’t have money, but please hold on I will be in Maryland soon to find you so we can talk. With all that, I kept begging him not to share or publish the photo and video because it will damage me as a young woman,” she said.

She agreed to have sex with Badio when she returns to Harper on February 10. However, Badio refused, complaining that he could not wait that long. Fearing reprisal, the victim said she asked a male friend at the university campus who knew Badio to get involved to plead with the suspect to wait for her arrival to the county.

However, the involvement of another party reportedly enraged Badio and he shared the images and video on Facebook. She first became aware of this when she received several calls from friends and family members from across the country letting her know that they had seen the video.

At this point, the victim said she could no longer contact Badio and her friends in Maryland could not find him either.

“Immediately, we involved the police, who started searching for him across Maryland, but they could not find him,” she added.

The case led to protests by women’s groups in Maryland, who called on local government officials to arrest and prosecute the alleged perpetrator who had fled Harper after sharing and publishing the images. The protests led the Liberia National Police to intensify its search for Badio, and soon after, he was apprehended in nearby Pleebo, where he has gone into hiding. 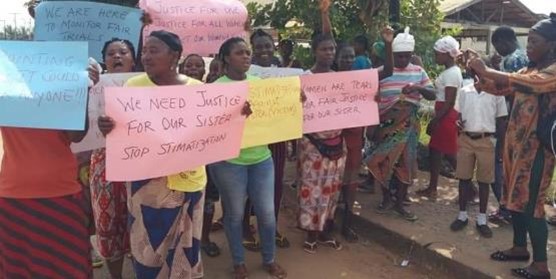 When he spoke to police in Harper, Badio admitted to possessing the nude images of the victim on his phone; however, he denied that he was the one who shared them on Facebook. A subsequent search of his phone revealed that he possessed numerous nude photos and videos of other women. He was also found to operate several Facebook accounts.

Badio was charged with disseminating obscene material and criminal coercion. Each charge could lead up to a year in prison. Badio is being held at the Harper Central Prison awaiting court trial.

Meanwhile, in Monrovia, the victim explained how her nude photos and video had left her phone. She noted that she had been friended on Facebook by an account labeled ‘Deng De Boss’ who claimed to be famous Liberian musician Daniel ‘DenG’ George. She noted that the individual behind the account chatted with her on numerous occasions before proposing to her, which she accepted.

The victim noted that the conversation took place over the phone and they began exchanging photos on social media.

“Last week, when we were chatting, we began to make love, laugh, and tease each other,” she explained. “Later, he sent me his nude photo, but he did not show his face and requested that I do the same, including a short video. I said no, he kept talking to me until I was convinced and sent my nude photo and the short video. Soon he received my nude photo and video, he replied me saying thank you for exposing yourself to the world. He blocked me from Messenger.”

She said a Mobile Money agent later confirmed that the phone number ‘Deng De Boss’ had used to call her was registered to Badio, the arrested suspect.

She is now pleading to human rights organizations and advocates for women to help her adjust to her new reality. Ashamed to return to Maryland, she wants to transfer to a university in Monrovia to continue her studies.

Meanwhile, she is warning her peers to be careful in their online interactions.

Meanwhile, the head of a Harper-based NGO, Peace Liberia, is calling for a change in venue for the case because of the popularity of the accused.

“We are strongly against the act of someone doing such thing to our female, women are our mothers, sisters, and daughter in all we do, we as males should be the one to protect them,” Richlue Morlu added.

This is not the first time students at Tubman University have been involved in illegal online activities. In August 2018, the Harper Magisterial Court fined seven male students for using social media to spread rumors about two other female students being infected with HIV. The two women had sued their fellow students for assassinating their reputation.

The accused students were Gabriel Harris, Odakor Nah, Eric Wonsiah, Abel Teewon, Reedemer Wonsiah, Raymond Sammic, and Aaron Massaquoi. Both females, in separate lawsuits, claimed that the actions of their colleagues left a negative impact on their reputations.

The defendants were initially released on bail after a French lecturer of the university, John Dioh Kimber, filed a bond on their behalf.

During the hearing in court on May 2, Judge Dweh T. Morgan fined the defendants US$50 each. He said while the crimes committed by the seven defendants could have seen them imprisoned for four months in addition to a fine, he decided to be lenient because they were all students who were getting ready to take their final exams. He warned the students that he would not be lenient in the future.