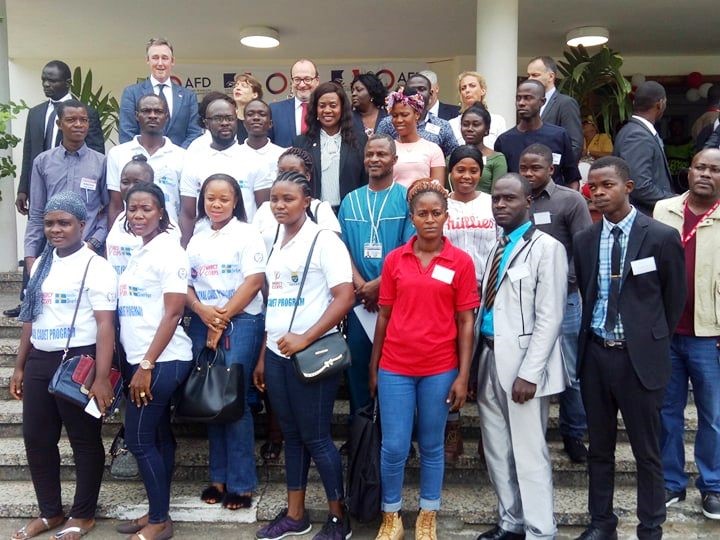 This article was sponsored by Mercy Corps

The launch was organized as a trade fair that brought together several young Liberian entrepreneurs to display their products and services. Held at the Paynesville City Hall, the program attracted the presence of several high-profile individuals, including Liberiaâ€™s first lady, Clar M. Weah; the French ambassador accredited to Liberia, Terence Wills; Mercy Corpsâ€™ executive director, Simon Oâ€™Connell; and the chief executive officer of AFD, RÃ©my Rioux.

Organizers are hoping that the first component of the project, the Liberia Employment and Entrepreneurship Program, can increase the employability and entrepreneurship of Liberian youth to facilitate their access to employment. A second component will create a regional system of access to higher technical education within the Mano River Union, including at the Felix HouphouÃ«t-Boigny National Polytechnic Institute of Yamoussoukro, Ivory Coast.

Giving a brief remark during the program, AFDâ€™s Rioux emphasized that the program was a fulfillment of the French governmentâ€™s commitment to working with the George Weah-led administration to help them succeed, especially in the area of youth employment.

Shortly after his inauguration, President George Weah made his first official visit outside Africa to France, where he met with French President Emmanuel Macron and discussed several bilateral issues, including support to youth employment initiatives in Liberia.

â€œFollowing this visit, France decided to add Liberia to the list of priority countries for its bilateral cooperation,â€ Rioux noted. â€œAnd I am really proud that less than nine months after this decision, we can already provide the first result for this partnership.â€

Rioux said AFD was â€œextremely proud to contributeâ€ to the governmentâ€™s Pro-Poor Agenda for Prosperity and Development that was launched a month ago in Ganta, Nimba.

He added that one of the areas that the French government wants to concentrate on is assisting the Liberian government in providing scholarships for young Liberians to become specialized in various disciplines.

Liberiaâ€™s first lady, Clar M. Weah, noted that the project had set the stage for more opportunities to empower thousands of young Liberians in the coming years. She expressed her excitement to receive the AFD head and his delegation to Liberia. She said their presence in the country shows the fulfillment of bilateral cooperation between both governments. Weah noted that a â‚¬10 million grant agreement had been reached between both governments, which included â‚¬5 million in budgetary support.

â€œThese beneficiaries will be trained in specialized skills, connecting them to employment and on-the-job training experience through cadets and apprenticeship programs,â€ she said. â€œUnder this agreement, many of our young people will be granted scholarships to study outside Liberia.â€

Weah noted how strongly Liberiaâ€™s growth and development rested on investing in the young generation. She said it would lead to sustainable peace through the promotion of economic growth in the country that would enable Liberians to take ownership of their own destiny and nationâ€™s development.

Mercy Corpsâ€™ executive director, Simon Oâ€™Connell, said he was impressed to see â€œsignificant progressâ€ being made in the entrepreneurship development of Liberia over the past five years. He said it shows how much stronger the government, the private sector, and civil society actors are collaborating for economic growth.

He said he was glad that his institution could be one of those collaborating with the Liberian government to improve its economy through youth empowerment programs and projects.

Speaking briefly to The Bush Chicken, the CEO of Sjedi Green Energy, a company that sells solar lights and other renewable energies products, Royston Gbelia, said he wished to see the government reduce the import tariff on products that are imported into the country.

â€œIf thereâ€™s duty waivers or reduction in the cost of importing these products into the country, the price would be affordable and more suitable to the Liberia public,â€ he said.

â€œWe have been into this business since six years ago, but today you can see that we are now producing different types of products,â€ he said, adding that Mercy Corps had been instrumental in their entrepreneurial journey. This article was sponsored by Mercy Corps. Featured photo by Arrington Ballah