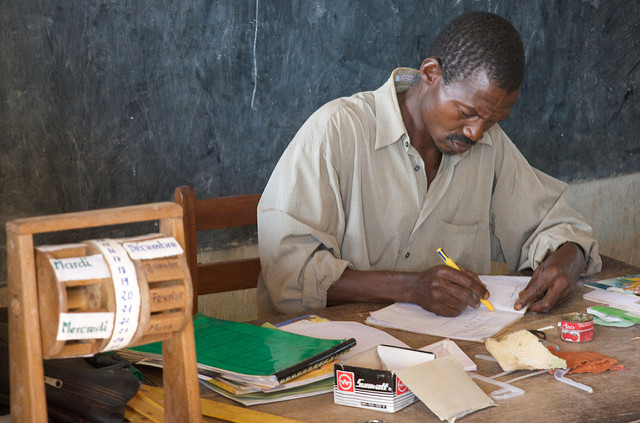 GANTA, Nimba County â€“ A Ministry of Education representative, Avertus Wright, called on all teachers in the county to assemble in Sanniquellie for a test. The announcement came a few days after Samuel Johnson, the Secretary General of the National Teachers Association of Liberia, said teachers would not sit for the tests being administered by the Ministry.

Wright assured teachers that the test was not intended to remove teachers from their jobs. However, â€œthe purpose actually for testing our teachers is to just find out where they are.â€

Wright tried to appeal to the teachers by characterizing himself as a professional who has the interest of the teachers. He said he had demonstrated this while serving as Director of the Zorzor Rural Teacher Training Institute.

He added that â€œpeople who have worked with me can attest that I am always in the best interest of others even more than myself.â€

Wright said testing teachers is a common practice around the world and should be seen as an opportunity. Regarding the test, he said it is constituted of basic mathematics and language arts.

Itâ€™s not calculus he said, â€œThis is just a simple aptitude test that I donâ€™t see any problem with.â€

Wright believes that NTAL misunderstood the entire process and that the Ministry needs to invite them for a dialogue to provide further clarity.

Following the administration of the tests in Nimba, Bong, and Grand Bassa, Montserrado will be next in line.

Meanwhile, on March 30th, the Secretary General of the National Teacher Association of Liberia, Samuel Johnson has said that teachers of the association in Nimba will not sit the MOE evaluation.

Johnson informed Presley Boosan of Radio Kergheamahn that all teachers in the 15 counties would not write any tests administered by the Ministry of Education until proper mechanisms are put into place.

â€œWell, the National Teacher Association of Liberia has taken its position,â€ Johnson said. â€œWe have written to the minister officially informing him that none of our members in the 15 counties should take any test until the national stakeholder meeting to discuss the matter.â€