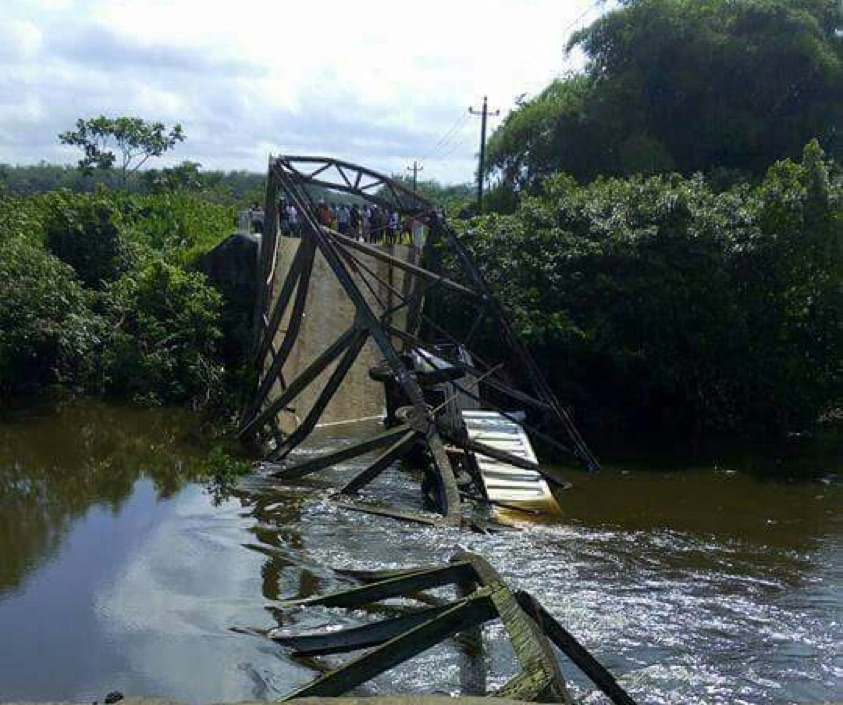 HARBEL, Margibi â€“ The Ministry of Public Works has announced that all is now set for the reconstruction of the Du River Bridge in Harbel, which has been collapsed since 2017.

The bridge, located on the Firestone plantation, collapsed when a truck loaded with crushed rocks was crossing. Since then, there have been calls from the public for authorities to alleviate the burden to their movement. The route was regularly used by people traveling to the Duside Hospital, Kakata, and surrounding divisions of the plantation. It is the easiest route for those traveling from Buchanan to Gbarnga or other destinations north.

For over four semesters now, students of the University of Liberia complained of the more difficult commute route to get to the Fendell campus.

Locals previously traveled across the river on a canoe, which was a dangerous mode of transportation until Margibiâ€™s first district lawmaker, Rep. Tilberosa Tarponweh, made available several life jackets.

For over two years, the Liberian government and Firestone Liberia were both tight-lipped about who bore the responsibility of reconstructing the bridge. A year ago, Firestone issued a press release noting that the company was unprepared to shoulder the entire responsibility of reconstructing the bridge. The company said it was working with the government and other partners to find a remedy to the situation.

Recently, speaking to a team of journalists in Monrovia, Public Works Minister Mobutu Vlah Nyenpan disclosed that a contractor had already been hired and that the cost of the project is over US$1 million. The minister said the government and Firestone have reached an agreement to install a new bailey bridge over the Du River.

â€œWe can assure you that the Du River project is expected to be completed within five months following a memorandum of understanding signed by the government and management of Firestone,â€ he added.

Nyenpan said the government would underwrite 60 percent of the total cost of the bridge while Firestone would pay the remaining 40 percent of the contract price. The bridge will be 155 feet long with an estimated width of 24 feet.

The announcement has prompted excitement from nearby residents. Jasper Chea, a resident of Bondiway, a suburb of Harbel, welcomed the news, stressing that their calls to Firestone, the government, and leaders in the county have been answered.

â€œAt certain point in time, I almost separated from my family. I couldnâ€™t withstand the stress of traveling daily in canoe,â€ he added.

He said in the heart of the rainy season the river gets overflowed making it scaring for daily users.

Calling on a local phone-in talk show on FAWUL Radio in Harbel, he complained that some of the passengers who ride the canoe daily are drunk and risk the lives of others.

Since the collapse of the bridge, the Duside Hospital run by Firestone was not an option for many during critical illnesses. Many had to turn to the much farther ELWA Hospital in Paynesville, rather than crossing the river via a canoe and then finding another bike to travel to the hospital.

The other route to the hospital, with which many users are not familiar, involves riding on an unpaved road and using a bypass.

Rep. Tarponweh, who has been concerned about the impact of the bridge collapse on his constituents, recently assured them that reconstruction work would soon begin.

â€œYou can all be assured that within the next few weeks, your suffering will be over. We expect works to begin in the next two or three months,â€ he said while donating hand pumps.

Though the Ministry of Public Works has announced that the Government of Liberia and the Management of Firestone has reached an agreement, Firestone Liberia Communications Manager, Patrick Honnah could not officially provide confirmation from Firestone. He said he would provide more information when he had the authorization to speak on the construction of the bridge.