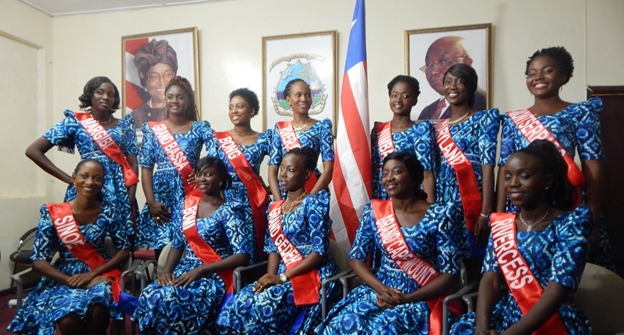 MONROVIA, Montserrado â€“ Barely two years after the controversial Miss Liberia Beauty Pageant, 11 Stripes, the organizer of this yearâ€™s pageant, is working to ensure that 2015 brings about a successful event.

The acting managing director of 11 Stripes Incorporated, Bendu Johnson, said in a presentation at the Ministry of Information that this year pageantâ€™s theme is “Beautiful Mind.” Preparation started in 2014 where the contestantsâ€™ first exercise was held in Buchanan, Grand Bassa but it was unfortunately put on hold due the Ebola outbreak. Johnson said organizers have resumed activities under the supervision of the steering committee. Johnson also encouraged young girls with wholesome beauty to fulfill their dreams and participate in the competition. They are emphasizing the beauty of the mind, body, and soul. Some of the contestants on display (Photo Zeze Ballah)

Thus far, five auditions have been held but space is still available for more girls. The event is expected to take place on July 31, 2015 at the Centennial Pavilion in Monrovia.

The co-chair of the steering committee, Scholastical Doe, said that there were many obstacles in 2014 that interfered with the entire exercise. She said it has not been an easy task to get the competition thus far.Â Nonetheless, she said they would restore the integrity of the pageantry. Doe said the government and organizers would not be able to cover all the costs of the pageant. â€œPartners and sponsors are very crucial to the entire exercise,â€ she said.

She also congratulated the organizers for a job well done in reaching this far. Scholastical said it was their prayer that what happened during the 2012 beauty pageant will not be repeated because it does not portray the good image of the country.

During the 2012 pageant, a controversy brewed when two contestants were announced winners. CT.com organized the pageant and was headed by Christopher Hayes Onanuga.Â The organizers announced the Lofa’s Rachael Knowlden as the winner, against the judges’ choice of Montserrado’s Brigitte Rouhana.

Following the controversy, a committee set up to probe the matter recommended an audit by the General Auditing Commission on all activities relating to the pageant.Â In its report, the committee blamed the Information Ministry for its failure to collect and ensure periodic reports as stated in the Memorandum of Understanding submitted by CT.com.

The report also accused the ministry of failing to provide proper accounting for how the US$35,000 budgeted by the government for the pageant was spent. The committeeâ€™s final report, on Oct.17, 2012 recommended cancelation of the pageant with no representation of Liberia at the 2012 Miss World Beauty Pageant. The Liberian government accepted the recommendation and canceled the results.