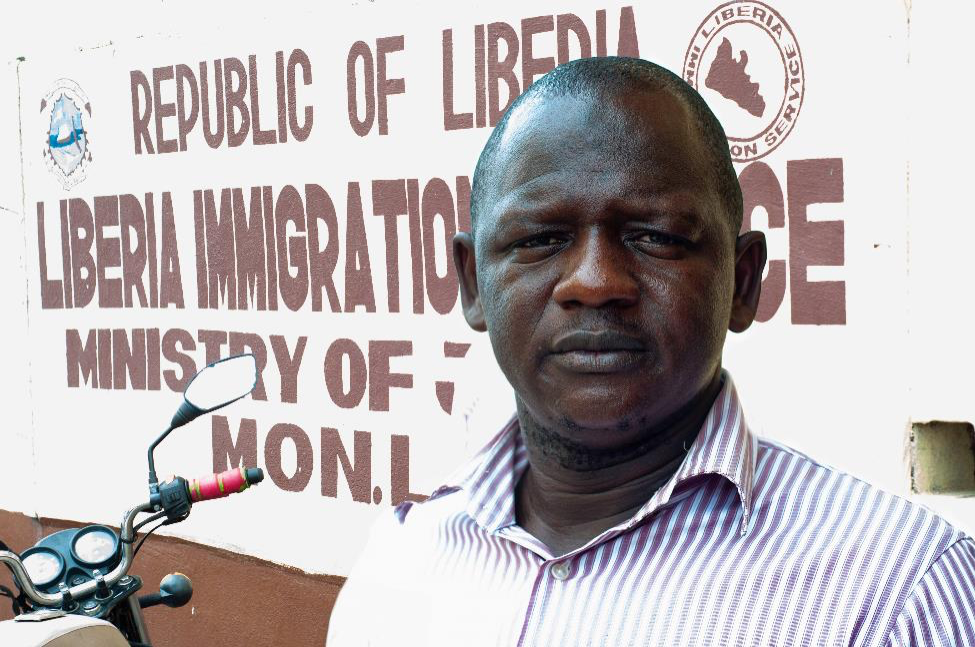 MONROVIA, Montserrado â€“ As the government includes 35 individuals on a travel ban list, a senior staff of the Flomo Theatre Production Company has been caught up in a case of mistaken identity as he attempted to fly out of Liberia.

Immigration officials at the Roberts International Airport prevented Nuku Kollie Ballah from flying out of the country on Tuesday, September 25 because his name was similar to that of Kollie Ballah, a Central Bank driver who the government banned from traveling amid the investigation into billions of dollars in Liberian banknotes that allegedly went missing. [Full disclosure: Nuku Kollie Ballah is the brother of The Bush Chicken reporter, Zeze Ballah]

He would later be brought back to Monrovia and subjected to spending a night in a holding cell at the Liberia Immigration Service office.

Abraham Dorley, the spokesperson for the Liberia Immigration Service, acknowledged that his agency had erred in this case. Immigration officials did not have photos that they could use to further verify travelersâ€™ identities, and they relied solely on names.

Dorley said, in the past, individuals on a travel ban had escaped out of the country by using different combinations of their middle and first names. The inconvenience to Ballah was a result of the agency wanting to avoid such occurrences.

â€œWe were just taking precaution to not have similar situation reoccurring,â€ he added.

After spending the night in a holding cell, Ballah was taken to the Liberia National Police headquarters on Wednesday, where his identity was verified and was redirected to the immigration office for a clearance to travel. Dorley said the commissioner general of the agency worked around the clock to ensure that Ballahâ€™s flight was rebooked without cost to Ballah.

â€œThey took the initiative as an institution to rebook his ticket,â€ Dorley noted.

Despite his ticket being rebooked, Ballah said he wants the agency to do more to provide compensation for the inconvenience they caused to him. His rebooked flight would arrive five hours later than the start time of the wedding.

â€œI was going for my sisterâ€™s wedding â€“ my sister that I have not seen since 25 years,â€ Ballah explained, noting that he was scheduled to play the role of the elder who would give his sister away to her future husband. â€œI bought all the clothes â€“ all the items for the traditional wedding â€“ all the items from the cultural background. So actually, itâ€™s really hurting me.â€

Besides the inconvenience of missing the wedding, Ballah said his reputation was at stake. As the second in command at the Flomo Theater Production, an organization that works with many donors, he feared that his ordeal would make donors wary of working with the theater group in the future.

â€œWhile I was at the airport, people were calling me criminal,â€ he said, noting that news of the incident had spread. He said he wanted the immigration agency to make several announcements clearing his name.

Alex Swaray, who heads Flomo Theater, used much stronger language: â€œThe Liberian Immigration Service has committed a complete damage of character to one of our staff who is traveling to the states and they should be held liable for the reparation of that character. And weâ€™re going to pursue whatsoever means possible to make sure the LIS is held accountable for the character damage done to Mr. Ballah.â€

Swaray pointed out how common the names â€˜Kollieâ€™ and â€˜Ballahâ€™ are for people from Lofa.

â€œWe are a traditional people. We name people after each other,â€ he said, adding that the government had enough time to put in place the proper procedures for verifying the identities of individuals traveling.

â€œAll those of interest are key known people – theyâ€™re not hidden people,â€ he said. â€œBy now, these peopleâ€™s characters and identities should have been displayed for public notice, not to embarrass peaceful citizens who are not even in the know of government working. Mr. Ballah has never worked with government ever in his life.â€

Dorley, the spokesperson for the immigration agency, said he could not speak on the issue of compensation: â€œThat is an issue that can be reached at the hierarchy level on grounds that Iâ€™m not the commissioner general.â€

However, he added that his agency was working to ensure that it has photo identification for all those on the travel ban list.

â€œWe just want to say that weâ€™re very sorry for this situation and we will do everything as an institution not to revert to [the] similar situation to cause embarrassment to peaceful citizens or others who will be using the Roberts International Airport to go abroad,â€ Dorley said.