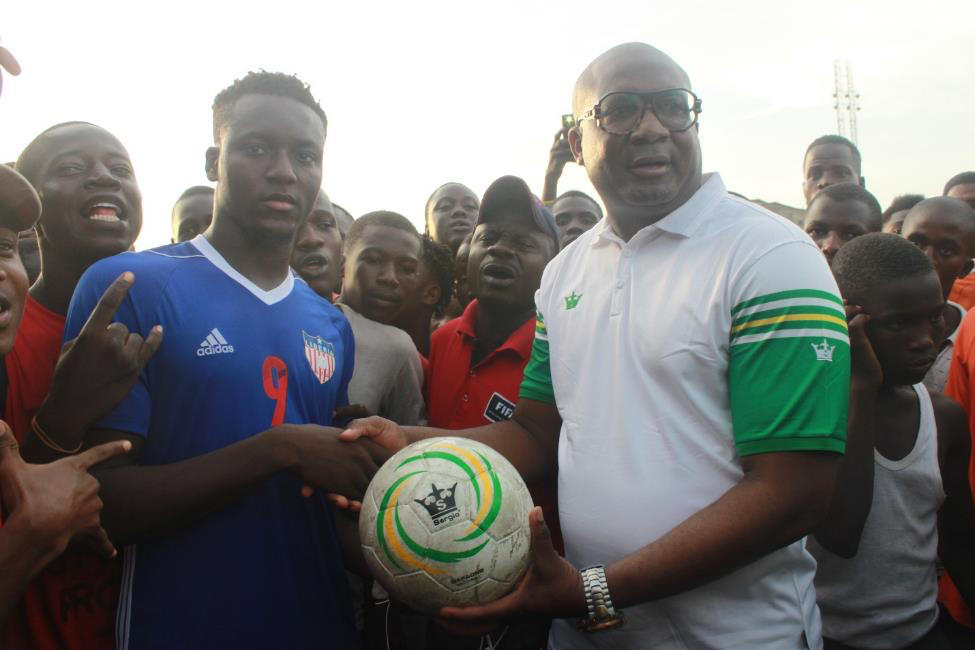 MONROVIA, Montserrado â€“ Liberiaâ€™s U-20 national football team has advanced to the semifinals of the ongoing West African Football Union U-20 Nations Cup after thrashing Sierra Leone in the final game of Group A to finish second behind Ivory Coast.

The junior Lone Star ensured they reached the next round of the competition with a humiliating 5-1 victory over their neighbors, Sierra Leone. The score was led by a hat-trick from Musa Kebbay, who plays for Second Division side, FC Bea Mountain.

Kebbayâ€™s hat-trick, plus a goal each from Watanga Football Clubâ€™s striker, Chauncy Freeman, and LISCR Football Clubâ€™s midfielder, Sheku Sheriff, was enough to prevent Sierra Leone from reaching the semifinals.

Liberia came to the match looking for the maximum three points to qualify along with Ivory Coast that had already booked their semifinal spot after their second group game. Sierra Leone needed at least a draw to advance to the semifinals. The task appeared difficult for Liberia as Sierra Leone had proven to be strong in their previous two matches.

Without an official reason from the organizers, the match venue was changed from the Samuel Kanyon Doe Sports Complex in Paynesville to the Antoinette Tubman Stadium in central Monrovia, where Liberiaâ€™s team conducts its training sessions.

The chairman of the local organizing committee later told The Bush Chicken that the decision was based on the fewer than anticipated number of fans that have been showing up at the Samuel Kanyon Doe Sports Complex. However, that decision was made after complaints by the head coach, Christopher Wreh, that his players lost the first match against Ivory Coast because a majority of his team were not familiar with the natural grass at the SKD Sports Complex.

In a post-match press conference, the former Arsenal man said playing on the grass requires specific boots, which were not available for a majority of the players. He said his boys were more familiar with the artificial turf, where they played their league games all season, and were finding it difficult to adjust to the grass.

Whatever the reason for the venue change, it worked out for the Junior Lone Star, as they were able to produce their best performance in the competition by producing the highest goals scored in a single game. Liberia was also the first team that produced a player with a hat-trick in the competition.

It took the team just three minutes to register their first goal of the match. A beautiful combination of Sheku Sheriff and Musa Kebbay led the boys to a promising start. With an early counter attack, Sheriff assisted Kebbay, who was in the position of reaching the ball at the back of the net. Kebbay tapped the ball over with his right foot to beat Sierra Leoneâ€™s goalkeeper, Mohammed Kamara.

The early lead didnâ€™t last long with the Sierra Leoneans getting a quick equalizer. Just a minute after Musa Kebbay struck to give Liberia the lead, John Kamara leveled the score to give Sierra Leone the hopes of qualification.

The skillful winger made his way from Liberiaâ€™s left side in defense before shooting at the edge of the penalty area to beat Ashley Williams in goal. Williams strived to prevent the ball from reaching the net but was unable as his fingers couldnâ€™t get a touch of Kamaraâ€™s strike.

With two early goals, the expectations of more goals came to reality, but it became one sided with Liberia alone scoring all the remaining goals before the end of the match.

Christopher Wrehâ€™s boys doubled their lead in the 27th minute through Sheku Sheriff, who scored from Barrack Young Controllersâ€™ forward, Sam Jackson. Jackson was instrumental in the goal with his run through the Sierra Leonean defense before finding Sheriff, who got his name on the scoresheet. By the 30-minute mark, the match had produced three goals, with Liberia scoring two.

Wrehâ€™s boys were in the driving seat and were on their way of joining Ivory Coast and Mali in the semifinals.

The 2-1 lead gave the team the confidence they needed as they went on attacking for more goals. Liberiaâ€™s attack, led by Sam Jackson, was unstoppable and Sierra Leone struggled to prevent the balls from being played in their half.

The chances were created but the goals failed to come, and Liberia held unto their narrow lead until the end of the first half. Their performances in the first half gave spectators the courage and the hopes of additional goals and a possible win.

As expected, they return from the break stronger than the first half. Sierra Leone still had the faith in the early period of the second half with their quest for an equalizer. Kamara came close to getting things leveled in the 48th and 22nd minutes but was denied by Ashely Williams, who made sure not to concede again.

The early threats by Sierra Leone put Liberia on the alert as they soon regrouped to get the job done. Sam Jackson was instrumental in leading the attack once again with his brilliant run and skills. Jackson made a long run through Sierra Leoneâ€™s defense and assisted Kebbay, who added his second goal in the 54th minute.

Up 3-1 and with more than 30 minutes to play, the goals were expected to flow in as the fans began to sing the same song when Liberia thrashed Djibouti 5-0 at the Antoinette Tubman Stadium in the 2017 Africa Cup of Nations.

Across the Antoinette Tubman Stadium, fans sang the song â€œYou Waste It Papa,â€ which motivated the boys in the match. It appears that the song was for Sam Jackson, who became unstoppable in the match, as he took several shots on goal.

Liberia continued to dominate the match and in the 72nd minute, Jackson made his way into the Sierra Leonean defense and dribbled his way past Mohammed Kamara, who fouled him in the process.

However, Coach Christopher Wreh seemed to be interested in more goals, with his introduction of strikers Chauncy Freeman and Mark Karlay. The duo replaced Sam Jackson and Sheku Sheriff in the 80th minute. The introduction of Freeman and Karlay made things worse for Sierra Leone, as the constant attacks continued.

Within their first minute on the field, they both combined to try registering the fifth goal. Freemanâ€™s cross from the right side was missed by Karlay. The 90 minutes ended 4-1 but Liberia kept pressing for a goal in the stoppage time and it was Freeman who got his second goal in the competition.

Freemanâ€™s goal came from Edward Ledlumâ€™s assist in the second minute of the four minutes added. His goal was the final one of the day as Liberia went on to dump Sierra Leone 5-1. Among the many fans at the Antoinette Tubman Stadium was the 1995 World Best Player, President George Weah. Weah was at the opening of the competition when Liberia was whipped 3-0 by Ivory Coast, but the five-star performance over Sierra Leone erased his frustration from the result against Ivory Coast, as he cheered the boys all through the match and presented the Man of the Match award to the hat-trick hero, Musa Kebbay, at the end of the match.

Liberia finished second in Group A behind an Ivorian team that won all its games. The Baby Elephants continued their brilliant form with a 4-0 over Guinea Bissau that failed to obtain a single point in all three of their group games. Liberia will now play Mali in the semifinals on Wednesday, May 2 at the Samuel Kanyon Doe Sports Complex.