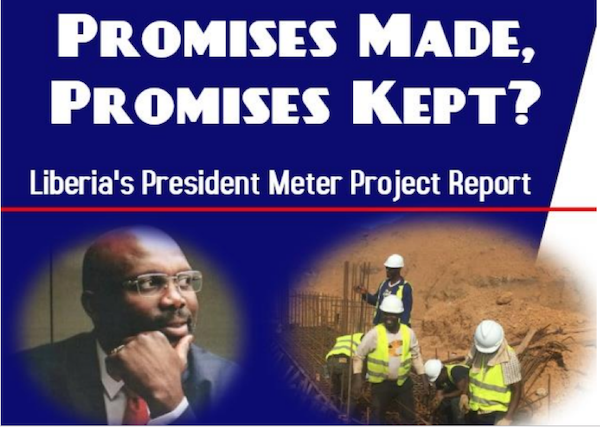 MONROVIA, Montserrado â€“ The National Youth Movement for Transparent Elections has released a report evaluating the first 270 days of President George Weahâ€™s government, based on promises made to Liberians during and after the 2017 elections.

While campaigning for the presidency in 2017 and after his election, Weah and the Coalition for Democratic Change promised to bring change to the country through a number of free services including early childhood education, maternity care at hospitals and clinics, and a waiver on fees for students taking the exams conducted by the West African Examinations Council. The report rates the governmentâ€™s progress for the period between January 22 and October 31 against its promises.

The President Meter Report focuses on promises found within the CDC manifesto as well as promises made since Weah was formally inaugurated as president on January 22.

Releasing the report, NAYMOTEâ€™s executive director, Eddie Jarwolo, said the overarching objective of the project is to promote democratic accountability by educating citizens on what the government is doing.

Jarwolo said the report tracked 85 promises, including 65 made through the CDC Manifesto during the 2017 elections and 20 promises made during campaign speeches, policy statements, and presidential directives.

He said of all the promises, 10 focused on education, 8 on health, 12 on the economy, 7 on agriculture and forestry, 12 on infrastructure development, 1 on transportation, 5 on justice and human rights, 4 for youth empowerment, 3 on security and national defense, and 5 on foreign policy and diplomatic relations.

He also noted that 4 of the 85 promises were for decentralizing institutions and systems of governance, 3 dealt with gender equality, 5 on the welfare of senior citizens and physically challenged, 2 for reconciliation, and 4 on accountability in governance.

According to the report, only 4 of the 85 promises have been fully delivered. They include the payment of national exam fees for senior secondary students, the renovation of the John F. Kennedy Memorial Hospital, passage of the Land Rights Act, and the reduction of salaries for public officials in the executive branch.

NAYMOTE revealed that 28 of the remaining promises are currently being delivered. For 38 other promises, the organization said no concrete action has been taken yet. Additionally, NAYMOTE was not able to verify whether actions had been taken on the remaining 15 documented promises.

The report noted that, while the number of ongoing deliverables is significant, they are mostly initiatives of the previous administration of president Ellen Johnson Sirleaf. They include the deployment of peacekeeping mission to Mali, advocacy against gender-based violence and the promotion of girlsâ€™ rights, and strengthening emergency preparedness and response mechanisms and institutions to prevent diseases, and the renovation of the John F. Kennedy Memorial Hospital.

According to the NAYMOTEâ€™s executive director, the promises were systematically tracked using different sets of tools or checklists.

He said this is the first time that the President Meter Report is being used to monitor, track, and document progress made in the implementation of campaign and post-campaign promises of government in Liberia.

Jarwolo also clarified the 38 promises categorized in the report as â€œnot-startedâ€ do not mean or suggest that they cannot be achieved with in time. He encouraged the government to take the report in good faith for strategic decision making and resource allocations to deliver on promises made.

NAYMOTE recommended that the government develop a results-based communication strategy to facilitate a two-way flow of information between the government and citizens, and limit making new promises, while focusing on the completion of past ones.

â€œPromises are policy statements and they should be informed by analysis based on empirical evidence,â€ NAYMOTEâ€™s report stated.

The organization also wants the government to monitor its promises and link them to the pillars of the Pro-Poor Agenda and its implementation.

The project was sponsored by the Open Society Initiative of West Africa and implemented by NAYMOTE in partnership with the Center for Democratic Governance.