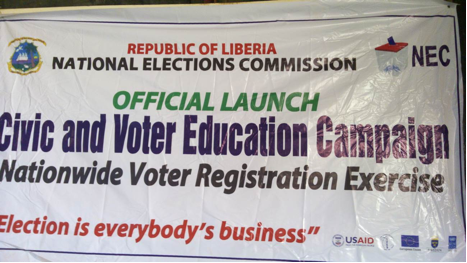 The campaign was launched across the country on Tuesday, Dec. 20. In River Cess, Initial Wesseh read a special statement on behalf of Jeanette A. Ebba-Davidson, the NEC Oversight Commissioner for the county. In the statement, the commissioner called on residents to see the voter registration exercise as “everybody’s business.”

Meanwhile, some River Cess citizens have called on NEC to provide additional polling centers in the county before the elections. NEC officials say there are 42 polling centers in the county currently, but Isaac Williams, the county information officer for River Cess, noted that many people did not register during the 2011 voter registration exercise due to their distance from the polling centers.

“People had to cover three to four hours walking distances before reaching one center,” Williams said. “If there are additional centers, more people will register and the number of registered voters will increase.”

“We have several mining areas in this county where there are more than 5,000 eligible voters working,” Jacobs said. “I am appealing to the National Elections Commission to carry centers in these camps. This will increase our number.” In response, William Tompoe, the elections magistrate, said the call for additional centers would be heeded.

“Your concern is well noted. The NEC has planned to place additional centers in all of the 15 counties,” Tompoe said. â€œThe only thing I cannot say is how many centers per county, but as we speak, the commission is collecting some data for the placement of additional centers. ”

While River Cess is Liberiaâ€™s eighth largest county, it is the fourth most sparsely populated county (tied with River Gee), making it difficult for its more than 70,000 to access the 42 polling centers being provided by NEC.