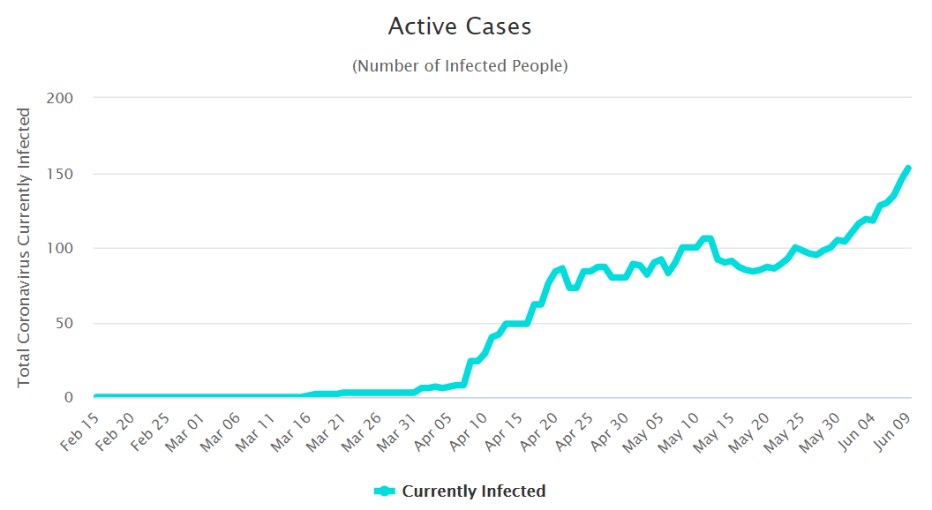 MONROVIA, Montserrado – Five days after the government announced it was easing restrictions on measures meant to control the spread of COVID-19 in Liberia, Liberia is recording an increasingly high number of new cases, with at least 10 new cases every day since the announcement. This is the first time since the pandemic that Liberia recorded such numbers in five consecutive days.

On June 5, the Executive Mansion announced there was no need for an extension of the state of emergency. Given the country’s level of experience with the pandemic and its mode of transmission, it said the country was making strides in containing the virus, compared to other countries.

The president, however, extended some guidelines intended to prevent the spread of the virus by two more weeks, including extending a curfew from 6:00 p.m. to 9:00 p.m. He also ordered that the lockdown restriction will be lifted in counties that have not reported any case of the disease so far.

“Movement to and from counties not yet affected by COVID-19 will be restricted. With the exception of basic supplies, all other such movements between/amongst counties are prohibited,” he said.

“The Liberian leader has called on health authorities in the country and other related government agencies to continue to enforce the stipulations of the public health laws in order to ensure that there is strict adherence to the protocols against COVID-19.”

The president also announced that the Roberts International Airport would be opened to commercial flights by June 21, as hotels, guest houses, and game centers would also be allowed to operate as of the same date.

Meanwhile, the Liberia Airports Authority says it has drafted a mandatory public health concept for travelers, as it prepares to reopen RIA and other airports around the country.

In a statement issued on its Facebook page, LAA said the draft document bears a technology-aided screening, testing and quarantine procedure, in keeping with an advisory from the Airport Council International and the National Public Health Institute of Liberia.

At the same time, the government asked members of the public to continue to adhere strictly to the safety measures intended to halt further spread of the COVID-19, including social distancing and regular hand washing.

“The wearing of face masks in public places remains compulsory. The joint security will continue to enforce these rules,” it said.

It said all other protocols previously announced and not amended by the executive mansion release will remain in force.

Liberia has 397 confirmed cases as of June 9. Although new cases have increased significantly, the number of deaths has remained fairly constant, with a little more than one death every three days. There are now 31 deaths as a result of COVID-19.