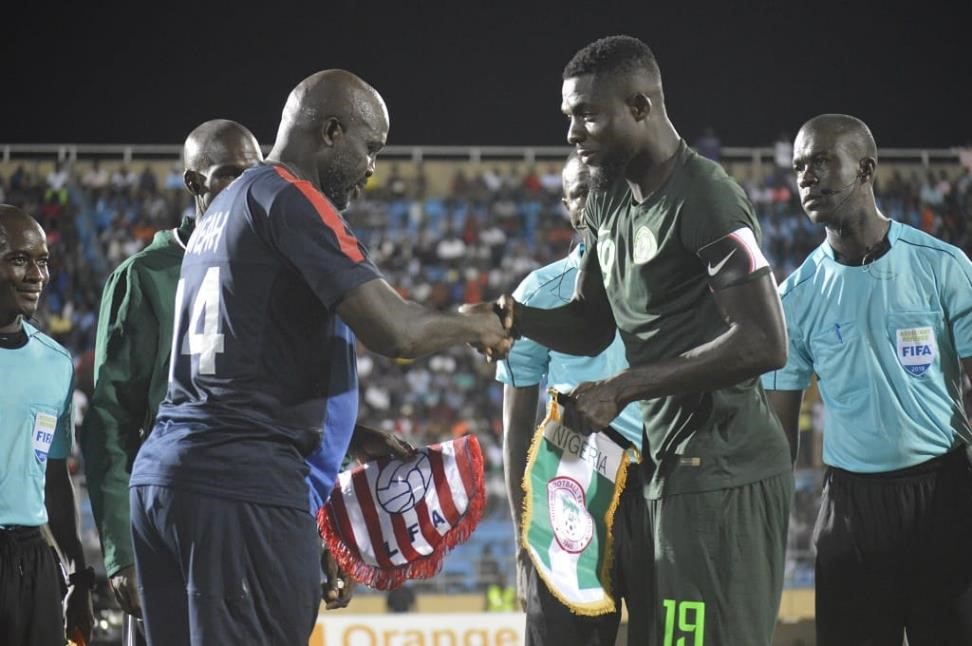 PAYNESVILLE, Montserrado â€“ The Samuel Kanyon Doe Sports Complex was the center of attraction on Tuesday, September 11 when President George Weah joined the Lone Star to play the Super Eagles of Nigeria in a FIFA international friendly match.

The match also saw a ceremony to retire the number 14 worn by Weah, who is the most decorated former national team player.

Lone Starâ€™s head coach Thomas Kojo started the 51-year-old Weah and his former teammate James Debbah, who holds the record for most goals scored for Liberia.

While Liberia used a team of seven home-based players and two retired national team players, Nigeria didnâ€™t take things lightly as they featured a formidable side. The Nigerian team was led by three-times Israeli League champions John Ogu. Stoke Cityâ€™s Peter Etebo was also featured, along with Henry Onyekuru, whoâ€™s on loan to Turkish side Galatasaray from English Premiership club Everton. Also, on the Nigerian team was Leicester Cityâ€™s Wilfred Ndidi and Kelechi Iheanacho, who was a second-half substitute.

On paper, Nigeria was the favorite, and they quickly proved their supremacy on the pitch. It took the Super Eagles just 11 minutes to score, which came through Henry Onyekuru, who headed the ball at the back of Tommy Songoâ€™s goal.

What was meant to be a celebration for Liberians turned out to be a disappointing moment as the stadium became quieter.

The middle-aged president still dazzled the fans, although his portly figure and sluggish speed were reminders that he is no longer the blazing striker he once was. The former AC Milan attacker tried to dribble his way through the Nigerians, but they had no mercy on him, despite being a president.

The Super Eagles kept knocking on Liberiaâ€™s defense for a goal. In the 33rd minute, they doubled their lead with a header by Simeon Nwankwo, off a corner from Peter Etebo.

Liberiaâ€™s goal-scoring machine, William Jebor, who was paired up front with Weah and Debbah, couldnâ€™t get the job done as he was playing with two players who didnâ€™t match his pace of the game. Liberia failed to register a goal in the first 45 minutes as they went to the break two goals down.

After the break, Coach Thomas Kojo took out Songo for the 17-year-old goalkeeper, Ashley Williams. Williams, who helped Liberia finish second in the 2018 WAFU U-20 Nations Cup, made his debut for the senior national team of Liberia.

Liberia returned stronger after the break with laudable efforts against the Nigerians. In search of a goal, Kpah Sherman, Seku Conneh, and Sylvanus Nimley were introduced in the second period of the match.

The substitutions increased Liberiaâ€™s pressure for a goal. Weahâ€™s team did not register a goal until he was taken out in the 79th minute. His absence meant Lone Star now had 11 active players on the pitch.

Liberiaâ€™s efforts for a goal didnâ€™t materialize until the 85th minute when Semi Ajayi touched the ball inside the penalty box. Kpah Sherman converted from the spot to score Liberiaâ€™s only goal of the match. It was the 26-year-old strikerâ€™s first goal for the Lone Star.

After Liberiaâ€™s defeat to Nigeria, the stage was set for a brief program for the retirement of the number 14 jersey. The president gave a short speech thanking those who helped him along the way. He heaped praises on Liberians for their support throughout his career.