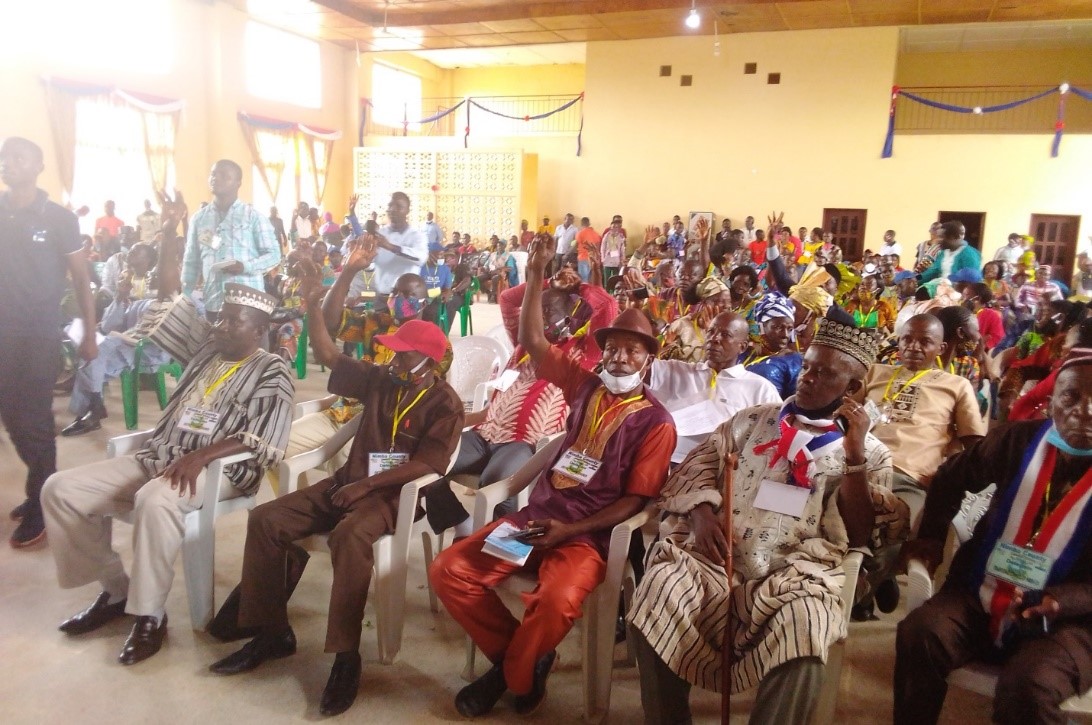 SANNIQUELLIE, Nimba – Delegates at the eighth regular sitting of the Nimba County Council have unanimously endorsed the appropriation of over US$800,000 for the rehabilitation for farm-to-market roads across the county to enhance the transportation of their farm products to bigger markets. This amount is drawn from the US$2.7 million budget approved at the council sitting.

Liberia’s budget law makes the county council sitting the highest decision-making body in a county. In each county, representatives from across the county and from various groups come together to discuss the appropriations and utilization of the County and Social Development Funds.

This year’s sitting brought together 114 delegates, including paramount chiefs, city mayors, statutory district superintendents, district commissioners, and youth and women representatives from all across the county.

For several years now, Nimba’s 22 pieces of earthmoving equipment purchased with the county’s social development funds in 2011 have been grounded due to the lack of financing to repair them. This has resulted in a dilapidated state of many roads in Liberia’s largest county.

Reading the resolution drawn from the sitting, Rep. Dorwohn Gleekia of Nimba’s sixth electoral district, who headed the resolution committee, said US$500,000 would go towards repairing and maintaining roadbuilding equipment. Meanwhile, US$384,220 would be used for fuel and lubricants for the machines.

The funding for this year’s appropriations come from the sales of US$469,000 worth of scrap metals belonging to the county to Sethi Ferro Fabric and the provision of US$1.55 million from ArcelorMittal as payment of its social development fund. County leaders hope that other arrears owed to Nimba by the government and concession companies would cover the rest of the county’s budget.

Besides the maintenance of equipment, Rep. Gleekia also said US$199,320 was appropriated for paying liabilities to the Jungle Water Group of Investment, Ma. Queen Incorporated, Denton Security Firm, and other parties. Additionally, the county appropriated US$42,000 to renovate the superintendent and assistant superintendent for development’s residences.

A further US$66,939 was allotted to allow the completion of past projects that were halted due to the lack of funds. Another US$140,000 would go to complete the Gbaonipea Community School, Gokorpa Public School, and the Flumpa commissioner’s compound.

The project management committee, which is responsible for supervising how the funds will be spent, will receive US$270,919 for its 12-month operations. Another US$792,068 would be spent on capital expenditure (including the construction of infrastructures in all nine districts and within the communities that ArcelorMittal directly operates).

The county decided to provide US$50,000 to the Nimba County Community College for staff development and US$51,000 in scholarship for Nimba students from the nine electoral districts. A further US$20,000 was allotted to the Nimba County Health Team for its operations and US$30,000 was given for the improvement of sanitation in Nimba’s six cities.

Special groups also benefitted from the allotments, with US$30,000 provided for the completion of the media resource center being undertaken by the Nimba Community Radio Association, US$40,000 for the construction of the county chief and elders headquarters, and US$40,000 allocated for a project for persons living with disabilities.

The county also appropriated US$5,000 for its security operations.

2 days ago by Sampson David