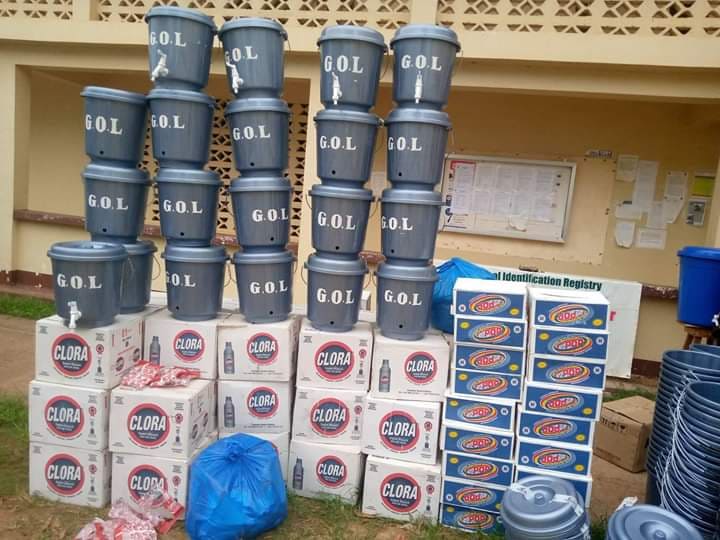 Nimbaâ€™s Superintendent Nelson N. Korquoi brought the materials into the county last week to be distributed among the nine electoral districts and the six cities in the county, according to County Inspector Mark Gbliwon, who presented the materials for distribution across the county.

“The government, in its wisdom, has presented to us 300 pieces of handwashing buckets, 45 cartons of chlorine, and several cartons of Tide soap to be distributed among our nine electoral districts and the major cities,” Gbliwon said.

The county inspector said the money used to purchase the materials was supposed to have been used on President George Weahâ€™s scheduled nationwide tour. However, it was reappropriated to fight the Coronavirus pandemic.

The county administration began distributing the materials on April 6 and is expected to continue until the materials reach all parts of the county, Gbliwon said.

He called on all Nimbaians to abide by health protocols, vowing that authorities would not hesitate to deal with anyone violating those measures, especially at checkpoints, borders, and in public places.

Gbliwon also called on the public to report any sick persons showing signs and symptoms of the virus and to avoid crowded areas.

Meanwhile, the county inspector called on philanthropists to assist the Nimba County COVID-19 Taskforce, which was launched a week ago, with cash and materials needed to make the taskforce more vigilant. For now, he said the group is only focused on awareness, as the county has not yet confirmed any Coronavirus case.

Gbliwon also sought to dispel rumors that the county administration had covertly received funds from the central government and other organizations to fight the virus. Similar to during the Ebola epidemic, many Liberians believe that their government officials intend to use this crisis to pilfer funds from the public or from donors. Such is the result of a deep level of distrust in the government and it has often hindered efforts to spread information about how citizens can keep themselves safe.

Gbliwon said those who were spreading the rumors about the county administration receiving money did not â€œlove their county.” He warned that the county could deal with the â€œevilâ€ and â€œdevilishâ€ people caught spreading such information because it could undermine the county’s effort in the fight against the virus.