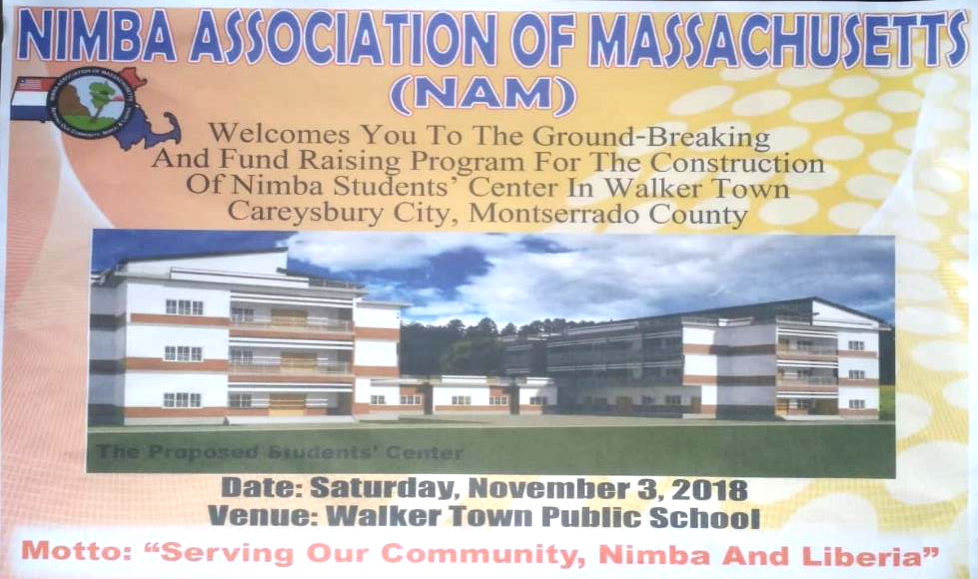 GANTA, Nimba â€“ Nimbaians in the United States of America will break ground today for the construction of housing units for Nimba students attending the University of Liberia.

The program, launched by the Nimba Association of Massachusetts, will be blended with a fundraising rally to support the project that will be implemented in Walker Town, near Careysburg in Montserrado.

The project costs approximately US$690,000 and is expected to be largely financed by the U.S.-based group, which is led by Paul Gailah, originally from Lorplay in Nimba.

The organization says it is undertaking the project to assist students from Nimba who face many difficulties in attending universities in Monrovia.

â€œSome of them find houses, but they are in far away areas and they face serious hindrance when it comes to getting themselves to school,â€ said Mark Gbleewon, the organizationâ€™s financial focal person in Liberia.

â€œSo, we deem it necessary to undertake this project to solve this problem.â€

The project is expected to see the construction of two two-story buildings and a resource center that will help students to conduct research.

Gbleewon said the mini-rally during the groundbreaking ceremony is meant to â€œget our peopleâ€™s involvementâ€ so that they feel a part of the project.

He said engineers have already started working on the project and construction will last no longer than one and a half year.

When completed, students using the facility will be charged US$5 a monthly.

â€œPeople who will be maintaining the area, we have to pay them,â€ Gbleewon explained the need for the charge. He added that the facility would need to pay for utilities and a janitor for maintenance.

Featured photo courtesy of the Nimba Association of Massachusetts