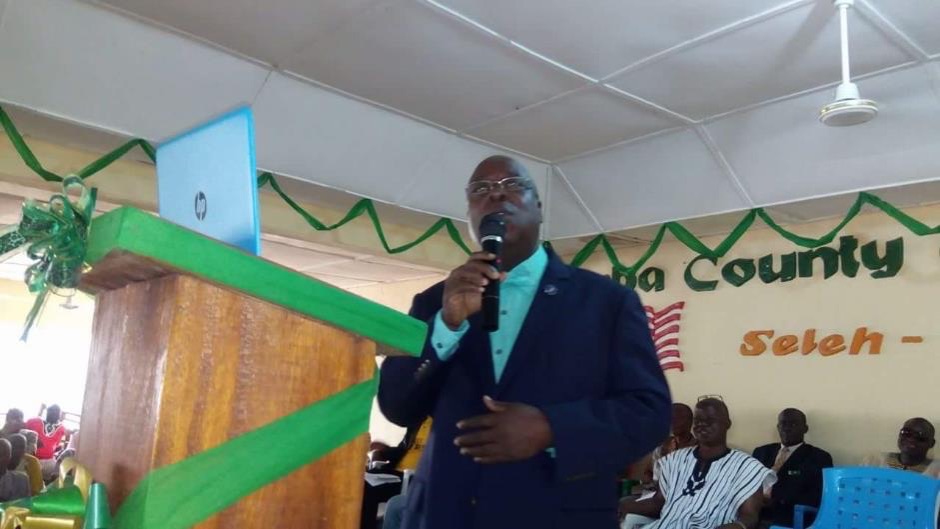 SANNIQUELLIE, Nimba – The president of the Nimba County Community College has outlined several challenges facing the institution, noting that he met the college’s account empty with debt owed to several vendors.

Edward Lama Wonkeryor, who recently took over NCCC after the dismissal of Yar Gono, disclosed the financial challenges of the institution at the fourth commencement convocation on January 12, when the college graduated 126 students in 14 disciplines.

During the most recent council sitting, Wonkeryor said NCCC was allotted US$50,000 toward staff development, however, that amount has not yet been provided.

Dorr Cooper, the county superintendent for Nimba, acknowledged that the county owes the college US$150,000. Speaking to The Bush chicken in Sanniquellie, Nimba on January 19, Cooper attributed the delay in payment to the lack of funds.

“The county did not refuse to pay the money to the college’s administration, but rather the lack of funds has contributed to the delay,” he said.

Cooper said the central government had not released money into the county’s account for 2018/2019 fiscal year.

He promised that the county administration would work closely with the Nimba County Legislative Caucus to ensure that the amount in question is disbursed to the college to smooth its operations in Nimba.

Wonkeryor said the lack of funds from these key sources added to the challenges of NCCC: “The college is faced with countless constraints and challenges in the absence of these funds from [the county] administration, ArcelorMittal, and the government of Liberia.”

According to the mineral development agreement signed between the government and ArcelorMittal, the community college is due US$50,000 annually from the company. But Wonkeryor noted that since 2011, the company has not paid what is now US$400,000. Payment of that amount would allow the college to operate more smoothly, he said. It would also allow the college to pay off its US$174,608 in debts to a variety of vendors.

He also noted that all of the college’s vehicles are non-operational due to mechanical problems.

“Currently most of the faculty members walk to go on campus due to the lack of vehicles, which is creating problems for the institution,” he said.

Wonkeryor praised the Nimba County Legislative Caucus, which lobbied to have US$500,000 included in the 2018/2019 budget for faculty and student housing.

“With this amount, we are currently constructing five housing [units] and two dormitories to accommodate students and faculties,” he said, noting that the college lacks faculty housing.

If the college can get the additional funding from the county administration and ArcelorMittal, he is hopeful that the faculty housing and dormitory projects will be implemented.

Wonkeryor said despite the challenges the college faces, his administration will implement his predecessor’ agendas to move the Nimba County Community College forward to a bachelor-degree granting status.

“As the college seeks elevation to full university status, the need for qualified faculty and staff remain a paramount concern for the administration of the institution’’ he said.

Wonkeryor said he anticipates that the legislative caucus and all stakeholders will work with NCCC to fast-track a bill aimed at elevating the college to a full university. He said NCCC had met all the requirements established by the National Commission on Higher Education and was now awaiting the commission’s response.

He noted that the college needs additional funds as it seeks elevation to a full university status for infrastructural developments including building additional classrooms to accommodate a growing population, faculty housing, and students dormitory.

Cooper, the county superintendent, added his voice in support of the college’s status being elevated.

“For example, 63 percent of our faculty members are bachelor degree holders in different disciplines, which needs to be addressed,” he said.

Wonkeryor said since 2012, the college continues to experience grow steadily. It now has 2,942 students, making the college the most populous community college in Liberia. He expects the college’s enrolment to increase by 25 percent for the second semester of the 2018/2019 academic year.