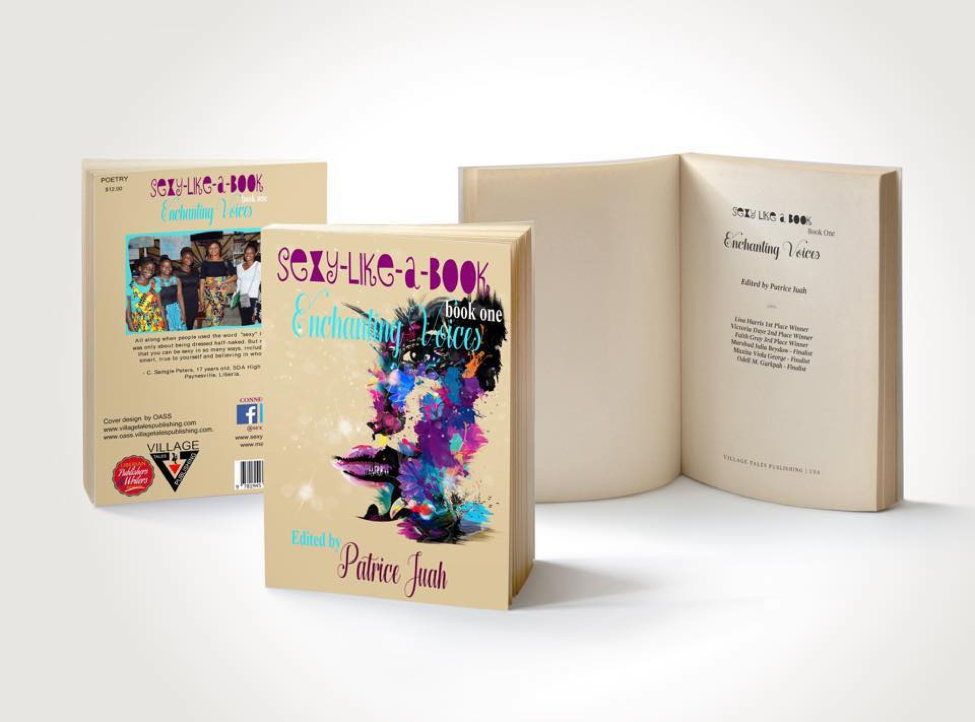 The following piece is featured in Enchanting Voices, an anthology of poems and essays written by the winners and finalists of the 1st Annual Sexy Like a Book writing competition for Liberian Girls. Buy the book online at Amazon.

Liberia, having had her fair share of chaos; instability, poverty, disease, amongst other calamities, needs more than an ordinary leader. With such devastation, the country has faced in times past, mostly due to poor leadership and little or no vision, Liberia needs an extraordinary leader in order to rebuild and restore all that has been lost over the past years, and improve on successes and gains made.

I strongly believe that Liberia needs a person who is God-fearing, patriotic, and compassionate to lead this country. Most Liberians lack true patriotism. One component of development is that the citizens of a country must have a love for the country, and must be patriotic. To achieve this, patriotism has to be cultivated in the citizenry from the earliest stage of oneâ€™s educational journey.

To put Liberiaâ€™s growth and development into proper perspective, Iâ€™ve chosen to visualize myself as President of Liberia, and give a detailed breakdown of my plans and vision for the country.

If I were the president of Liberia, I would ensure that education is priority number one. When a nation is educated, the livelihood and living conditions of its citizens are greatly improved. They contribute tremendously to the growth and infrastructural development of the nation.

To prioritize education, I will increase the current education budget by 70% and set academic standards for teachers that are giving out knowledge and students that come in search of knowledge.

Furthermore, I will introduce policies that will ensure that primary schools are free. I will also create a student trust fund through which college and university students can access and obtain student loans to be paid over a specified period after obtaining their first degree.

Practically, I would seek to build tuition-free vocational training centers across the country, especially in the rural areas. Young people can have access to knowledge in various technical studies and gain professional certificates and diplomas to facilitate career development, entrepreneurship, and self-employment.

Another area I would give priority focus is the agriculture sector. This sector has not been given the attention it deserves, thereby leading to our major staple food (rice) being imported into the country on a large scale. This leads to millions of dollars leaving our country that could have been used to create economic stability for the country, and jobs for our poverty-stricken mass population. Liberia has a surplus of rich soil that can be productive. Investment in the soil is a lifetime achievement I would secure for Liberia and her future generations. I believe one of the major investments Liberia needs is to go back to the soil and grow and produce what we eat.

In furtherance of my interest in agricultural activities, I would ensure that the Ministry of Agriculture creates a program where farmers across the country have access to finance to support their agricultural activities. In the rural areas, in particular, I would provide basic materials and equipment to help them develop and maintain their farms. This will facilitate the growth and production of food crops for their own consumption, and also for local trade, in order to earn a living and contribute to the economic vitality of the country.

Through partnerships with international organizations, and countries with success stories in the agriculture sector, I would support both subsistence and mechanized farming by providing access to finance to both small and large-scale farmers, and plantations across the country, to enable them to grow and produce different kinds of food crops for the benefit of the country. This will subsequently contribute to a sharp increase in the employment rate by creating job opportunities. I will also ensure that personal income tax and business tax are decreased to a level that affords small, medium, and large businesses to grow. This will serve as an example that Liberians can live by, and become successful right here in Liberia.

Moreover, the cost and selling prices of these foods would be less, since they are now being produced in the country. Also, excess of the food crops produced can be exported to nearby countries, which would boost the economy of Liberia and help provide better standards of living for the people of Liberia.

With all these benefits and good results, the prioritization of agriculture and the efforts of the government through the Ministry of Agriculture might yield, students at the university level will now be encouraged to study and further specialize in various fields of agriculture. This will enable them to emerge with new and sophisticated methods of farming to improve the farming system for years to come.

Another important initiative I would carry on as president is, youth empowerment. With the current youth population of Liberia estimated to be a little more than 65 percent, the young people have very important roles to play in the growth and development of Liberia. If they are neglected, the future of the country is also neglected. Therefore, I would seek to ensure that there are youth empowerment opportunities created in different sectors. These areas will enable the youth to meet their basic social needs while gaining the requisite skills needed to take on important roles in their not-too-distant future.

Another relevant factor I would focus on as president is decentralization. Liberia has fifteen counties, but it seems as if it has just one, which is Montserrado, where the capital city, Monrovia, is located. Due to the problem of decentralization, development of other parts of the country has been difficult, thereby causing congestion and over-population. This is happening because of all, or most, of the government ministries/agencies, private entities, factories, industries, etc., are located in Monrovia or around Montserrado.

Because of the economic activities and other benefitsâ€”better job opportunities, schools, residential communities, hospitals, and standards of livingâ€”compared to the rural areas, citizens tend to find no interest in other parts of the country besides Montserrado, where these public and private agencies, institutions and corporations operate.

If I were the president of Liberia, I would build roads and bridges to connect towns and communities from one point to another. These roads and bridges would promote businesses and industrialization due to good infrastructure in those isolated and abandoned areas. This will also contribute to the creation of job opportunities and attract more people to move into those settlements.

Liberia has fourteen other counties and many beautiful cities in those counties apart from Montserrado and Monrovia. Why isnâ€™t anyone paying attention to the other parts of the country? Do all the best things have to be in Monrovia? Does everyone have to work in Monrovia? Does everyone have to live in Monrovia or the best parts of Montserrado? No, it doesnâ€™t have to be that way. We need more modernized hospitals, updated school buildings, profit-making companies, and industries built in other parts of the country. People living in those areas, who are unable to move to Monrovia, can have job opportunities, and the exposure to better standards of living as well. Development has to reach those places that arenâ€™t being thought of.

There are many different, and benefiting things I could do for Liberia and the people of Liberia if I were president. From investing in agriculture, promoting youth empowerment, revising the education system, decentralizing the country, to providing care and shelter homes for people living with disabilities, and the mentally challenged, amongst many other visions I have for this wonderful country.

Liberia is beautiful and promising. All she needs is a leader who will fall in love with and care for her and her people. I have a vision for Liberia and Africa at large. I look forward to the time when I shall be opportune to serve and realize that vision.

Enchanting Voices echoes stories of a Liberia that could be but struggles in the now. It echoes stories of hope and dreams; of courage andÂ resilience; of possibilities and a future waiting to bloom. This collection is a poetic celebration of youth, innocence, joy, and emergence from a place of despair to one of progress and fulfilled dreams, if Liberians stay on the path of development, change their mindsets, and value Liberia for the true treasure that she is. The book will be launched in Liberia on Saturday, Sept. 23 at 1:00 p.m. at the Lila Brown CafÃ©. Find out more here.