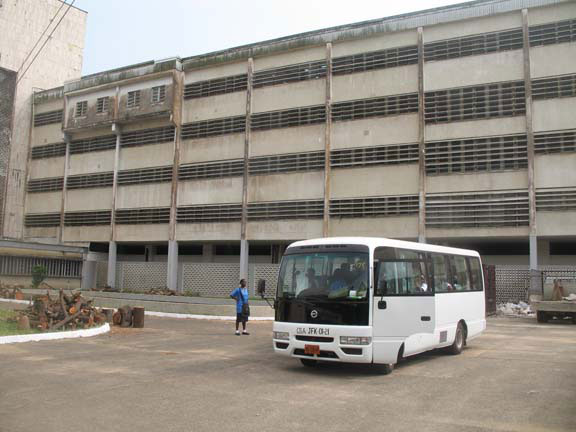 A big news story emerged last week in Monrovia, at the John F. Kennedy Medical Center, the nation’s biggest hospital. What has surfaced is news of a criminal syndicate at JFK, which has managed to defraud the health facility of about US$500,000.

The story took a lot of Liberians by surprise, as it sounded like a tall tale of some sort, but itâ€™s sadly true.

The group was headed by JFK’s Chief Accountant Patrick Konuwa, Budget and Accounts Officer Boakai J. Varney, and IT and Database Supervisor Arnous Rabeah. Reports say they connived with other persons out of the employs of JFK to open accounts at the First International Bank, diverting needed funds meant for sick Liberians for their own benefits. Members of the syndicate are said to include former employees of FIB, also.

Liberiaâ€™s daunting health care needs and challenges make the news of the syndicate even more stupendous.

Konuwa and his band were clever enough and successful in swindling funds that could have bought equipment and drugs, in addition to training medical staff at the institution. JFK needs all of these and more.

Today, Liberia is in dire straits in every socio-economic and political facet, due to the country’s fourteen years of war. Because of the war, Liberians are depressed. There is so much frustration in the country. Health-related issues particularly continue to confound Liberians.

According to a 2008 study in the Journal of the American Medical Association, 40% of adults had shown symptoms of major depressive disorders, while another 44% of adults also had symptoms of post-traumatic stress disorder adding sadly that Liberia has just one psychiatrist to a population ratio of about 1 million.

These monies being taken away through graft could have instead bolstered a financial space to help improve health care in the country. Liberia cannot be in the position of constantly begging for donor funding while the monies meant to help our own people are embezzled, and this is what Liberia has now come to symbolize, that individuals will deliberately use public funds as their own private domain, even while other citizens are dying and flying out of the country for treatment.

As President Ellen Johnson Sirleaf sought reelection, these were the issues she said she would tackle. The President said she needed the chance at reelection to polish her legacy in an effort to have left a bigger footprint, promising to work hard to redeem the country’s negative image by setting the country on an â€œirreversibleâ€ track by building on her â€œtransformation agenda.â€

The task has been daunting, however, because according to Liberian Census Bureau only 17% of the population have access to adequate sanitation facilities, with almost the entire health care facilities destroyed during the war, which reports say is being gradually built. By 2011, as the president sought reelection, government expenditure on healthÂ care per capita was US$22, accounting for 10.6% of total GDP. In 2008, LiberiaÂ had only one doctor and 27 nurses per 100,000 citizens.

When almost half a million dollars is going missing from a single government hospital, you wonder how much would an audit reveal has gone missing from the Health Ministry and similar health facilities across the country, not to mention monies being lost to official corruption in the public sector. The JFK syndicate is disheartening and rather unfortunate.

Reports say Liberian prosecutors have issued a 5 counts indictment with several charges levied: economic sabotage, theft of property, money laundering, criminal conspiracy, and criminal facilitation. And that one of the 15 indictees has already been apprehended and detained at the Monrovia Central Prison â€œafter failure to file bonds.â€

How was this even possible, for this to have taken place under the noses of the management team at the JFK, given Liberia’s acute health needs and especially the needs of children? Aside from these chronic health care needs, malnutrition continues to harm Liberian children. A few years ago, theÂ Integrated Regional Information Networks news reported â€œthat 45% of Liberian children suffer from varying forms ofÂ malnutrition. A nutrition adviser fromÂ UNICEFÂ told IRIN that malnutrition results in learning deficiencies, which will affect the economy in the future.â€ This is incomprehensible because half a million dollars could have provided drugs and nutrition for a lot of families.

It cannot be overemphasized that the two most important services that citizens should expect from its government are quality education and health care, the two which are currently in crisis as our leaders scrambled to provide answers to the citizens who have entrusted them to help solve the issues that are dear to them â€“ health and education. The fact that this wanton and egregious derelict is ongoing at JFK is disheartening.

It is hoped President Sirleaf will act urgently. Liberians are dying of curable diseases. Liberians need to know their national government will provide their health care needs. Perhaps it is time Liberia look to other African countries like Ivory Coast and recently Gabon, which are in the process of implementing policies to provide their peoples with universal health care. The health needs of Liberians are urgent.

The Liberian people have already suffered so much the last few decades. The civil war has taken its toll on them, and so has Ebola. The current dire economic situation in the country has further exacerbated their already worrisome situation.

To add insult to injury, corruption has become a viciousÂ cycle in post-war reconstruction Liberia, as the country grows poorer and poorer as a result of entrenched graft and patronage. The United Nations Children and Education Fund had said: â€œif the status of Liberiaâ€™s health does not get better, the country would lose US$130 million in economic development within the coming 8 years.â€

And that report was issued in 2009. It is hoped President Sirleafâ€™s attention has been drawn to this national issue. Liberians deserves better because they have been through so much in the last few decades. All they want is to live in their homeland happily, after being on the run from the civil war and Ebola.