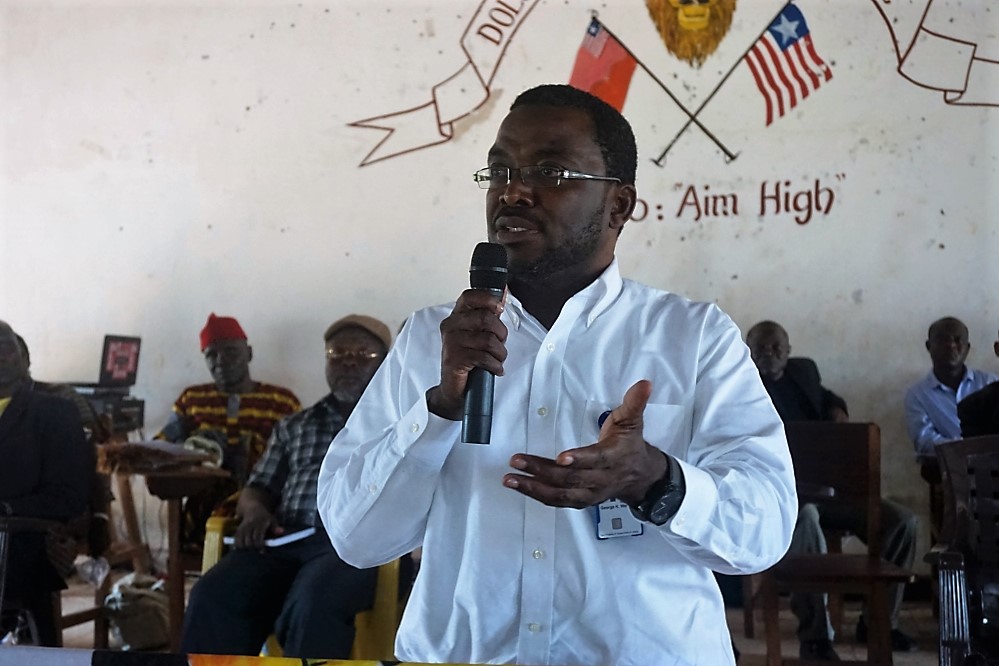 Liberia in this age of globalization and modernity is wedged in a web of dilemma due to anÂ array of factors. With all of what this country has in terms of natural wealth, it remains a symbol of poverty and illiteracy in Africa, even though it was once seen as the pride of Africa.

Notable among those factors responsible for Liberiaâ€™s slow-paced development yesteryear and even now are, but not limited to:

The failure of the Unity Party-led government can be predominantly attributed to these relapsing factors. Even though the government has benefitted greatly from local and foreign support, it has delivered very little due to its inability to set achievable targets, position the right people in the right places, and do away with political compensation.

For almost 12 years, most of the policies that have been driven by the ruling party are yet to produce any concrete result. The Poverty Reduction Strategy, which I cynically refer to as the Poverty Replicating Strategy, was a product of failure. The Agenda for Transformation is still far from meeting its goals. Hence, Vision 2030 is just another mere bluff that is being beleaguered by overly-ambitious goals.

However, I intend to principally focus my thoughts on Liberiaâ€™s paralyzed educational sector, which is significantly characterized by an unrealistic and unscientific â€˜education reform policyâ€™ under Minister George K. Werner.

In May 2015, Werner was appointed by President Ellen Johnson Sirleaf and confirmed by the Liberian Senate as Minister of Education. Upon his preferment, there was broad skepticism from trained educators about his ability to transform Liberiaâ€™s messy educational sector. This skepticism grew even more due to his low credentials particularly in education. Besides other credentials, Werner holds only one Bachelor of Arts degree in general education and religious studies from Marist College in Nairobi, Kenya.

The first approach taken by Werner to unilaterally engineer a 4G â€˜education reformâ€™ policy caused many to believe that he was on an expedition to even worsen the existing mess in the educational sector. After almost sixteen months, the incapability of Werner as chief of education is undeniably glaring. The fact is that Werner is unable to get the job done due to incompetence and minimum qualification.

Social work and education are two distinct fields with dissimilar mechanics, tactics, and techniques. Was Werner really a better choice to aggressively overhaul Liberiaâ€™s messy educational system? Can he find a cure to this pandemic? We say no! But again, the Liberian Senate is mostly at fault for not satisfactorily screening political appointees, of which Werner is no exception.

Representative Henry Fahnbulleh of Montserradoâ€™s fourth district was absolutely correct when he said, â€œThe job is too big for Werner.â€ Wernerâ€™s entire administration has been characterized by serious controversies and contradictions. Werner is popularly known nowadays for creating floorshow through rhetoric. He is now trapped in a cage of confusion as a result of his limited expertise in education.

Even while drowning, he seems too pompous to consult and ask for rescue simply because he has been parading as a â€˜self-proclaimed reformistâ€™ who has all the answers. As he masquerades in pretense, his options or ideas to improve the quality of education in Liberia remain barren. This is what happens when the spoiled system triumphs over the merit system. Letâ€™s now deal with the substantives of his cosmetic â€˜reformâ€™ agenda.

Liberia has been severely victimized for decades by unedited rhetoric, proffered by counterfeit reformists. Such is the case again with Liberia and Wernerâ€™s unedited rhetoric (â€˜From Mess to Bestâ€™ Policy). What has Werner changed to best since his ascendancy? Is the system better now than before? The WAEC results this year prove that Wernerâ€™s policy is nothing more than an unedited rhetoric.

The most horrible WAEC result since 2013 came under Wernerâ€™s reign. 22,671 out of 46,927 students failed WAEC this year (48.46 percent failure). WAEC could not even be held as planned (May 2016). There was also aÂ mass failure in high schools across Liberia mostly due to the poor quality of education.

Werner had unilaterally canceled WAEC in 2015 for students in ninth and twelfth grades as part of his plan to properly overhaul the mess. But it is evident that his plan, which I describe as an unedited rhetoric, could not produce any concrete solution to the mess.

Against expert opinions from educational stakeholders, Werner changed the academic calendar and prematurely closed all schools without broad-based consultation and coordination. He was also determined to unduly cancel the promotion of students during the 2014/2015 academic school year, but this attempt was resisted this time around. Surely, Werner was embarking on a journey to nowhere.

One of those seasoned educators who kept reminding Werner that he was proceeding wrongly is Liberiaâ€™s longest-serving principal, Leo Sampson of the Haywood Mission. Perhaps Werner thought that reform was a hasty or magical process. Sooner than later, he had forgotten about the full cycle of public policy. His failure to build consensus, consult, coordinate and collaborate from the onset has exposed his limitations.

According to Wernerâ€™s plan, before the reopening of school in September 2015, the Ministry of Education would have distributed one million textbooks to public schools for students from grades five to nine in the four core subjects (Math, Science, Social Studies & English), 1.3 million supplementary readers for students from grade one to four, provide instructional materials (atlases, globes, maps and magnets), and train thousands of teachers, school administrators and PTA members, etc. Unfortunately, most of these targets were never met before the reopening of school. Even up to now, we are yet to know the actual facts.

Even though the ministry has informed the public that it has distributed textbooks in various categories, conducted series of training, and distributed instructional materials, this information is yet to be proven with pictorial evidence.

How accurate are those statistics, because we rarely see those books and instructional materials with students and teachers? Where have they gone so soon? Even if books were distributed, teachers trained, and instructional materials provided, it seems like these projects have made little or no impact in terms of overhauling the mess. The mass failure in WAEC and Secondary Schools remains a strong justification to rely on.

Where are the 500 public schools Werner promised to renovate and construct? Where are the science clubs and laboratories? Does rural Liberia have sufficient science and math teachers now? Is the management system of public schools in Liberia more efficient and effective after spending more than US$2.00 million?

Where are the libraries, reading rooms, furniture (desks, tables, chairs, etc.) and teacher lounges in public schools? Even in Montserrado, there are hundreds of public schools lacking these basic academic facilities. Least to mention, rural communities.

Has the ministry decentralized education and school governance? Is the ministry on the path to getting the biometric ID card to monitor the attendance of teachers? Has the ministry cleaned its payroll from ghost names as promised? Does the ministry have a strong monitoring and evaluation mechanism in place now?

To what extent have unqualified teachers been booted out of the classrooms? Is Werner really meeting up with public expectation in accordance with his purported policy? I am asking all of these questions because these were overly ambitious promises made by Werner. The â€˜successesâ€™ of his â€˜master-planâ€™ after 16 months are vague and hard to detect.

Now we know that leaving from mess to best is not about making superb PowerPoint presentations and speeches. It goes beyond this stratum. Now we know that the failure of Werner is also hinged to his refusal to consult national stakeholders such as the civil society organizations, the National Legislature, and student groups. However, this too is Liberia!

A Glance at Bridge International Academies

Before dealing with the issue of Bridge International Academies, it is important that the public gets to know that the provision of public education, especially primary education is a core function of the State according to international protocols and the Constitution of Liberia.

Privatizing or commercializing public primary education to a profit-making entity like Bridge International Academies, speaks to the fact that the government has neglected its moral obligation and constitutional responsibility, which is in blatant violation of childrenâ€™s right to free and compulsory education.

From the inception of this Partnership Schools for Liberia initiative, a United Nations expert on Education, Mr. Kishore Singh warned Liberia not to proceed in such manner. The United Nations special rapporteur on the right to education, who is also a professor of international law said, â€œIt is completely unacceptable for Liberia to outsource its primary education system to a private company. Education is an essential public service.â€

â€œIt is ironic that Liberia does not have resources to meet its core obligations to provide a free primary education to every child, but it can find huge sums of money to subcontract a private company to do so on its behalf. Public schools and their teachers, and the concept of education as a public goodÂ are under attack,â€ the UN expert said.

Singh also called on the government of Liberia to approach the UN Educational, Scientific and Cultural Organization for technical assistance and capacity building, instead of entering into such partnership with a profit-making provider in education, â€œdevoid of any legal or moral justification.â€ With all of these, Werner still could not listen, but rather chose to hurriedly seal this deal.

Against expert advice, Werner has again outsourced public primary education to Bridge International Academies. This public-private partnership proves that the government lacks the passion, ability, and innovation to improve the system of primary education in Liberia after 11 years.

Looking beyond this weird approach of contracting a business firm to operate primary schools, it seems like this spree is intended for free chopping as usual because the rationale behind this initiative is a feeble excuse. It is important to also understand that Bridge International Academies is underperforming in Eastern Africa according to confirmed reports.

Why is our government paying Bridge International Academies a whopping US$11.4 million to run a pilot of 70 schools in a period of one year when there are thousands of schools in ruin? What sense does it make for our government to give BIA an estimated US$65 million in 5 years in order to privatize public primary education? Why couldnâ€™t the government divert this US$11.4 million to build high-tech libraries, science laboratories, reading rooms, computer labs and teacher lounges across public schools?

Instead of spending US$65 million in 5 years to cater for just a few schools, it is more logical for the government to train more teachers, build more primary schools, strengthen the system of monitoring and evaluation, employ more qualified teachers and school administrators, construct regional teacher colleges, etc.

Furthermore, I am still finding it difficult to understand why Werner had to turn to East Africa for a model to overhaul the mess, when there are better models in West Africa. Ghana, Cote dâ€™Ivoire, and Nigeria are far ahead of Liberia without privatization. Werner and his team actually need to ask for the secret behind a functional education system and stop pretending like they are working.

Cleaning the educational mess in Liberia will take a long time or remain impossible, especially with an incompetent minister of education like George K. Werner.

Truly, Werner is a fake reformist and impressionist. His â€œmess to bestâ€ policy is nothing more than an unedited rhetoric.

Werner is nothing more than a 419 reformist who has no genuine vision and innovation to overhaul Liberiaâ€™s messy educational sector. It would have been a serious disaster if Werner had been confirmed as minister of health and social welfare, as was initially proposed by the president. Reform is not about lip service and Facebooking. Instead of cleaning the mess, Werner is piling the mess.