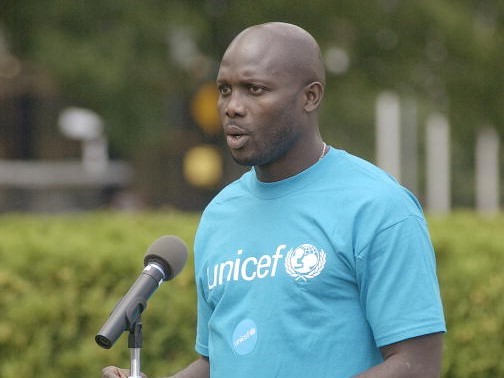 The news is a setback for a country in need of serious policymakers in the three branches of government to give the Liberian people the needed policy prescriptions to move Liberia forward after so many failed governments and leaders.

For Weah, a man of humble beginnings, he now occupies what is probably one of the most important senate seats in the country. Montserrado is Liberiaâ€™s most populous county, containing almost half the population of Liberia â€“ Monrovia alone is about 1.3 million inhabitants out of a country of about 4.5 million.

George Weahâ€™s senatorial bid and subsequently his unsurprised win was meant to have inspired hope in a desperate people looking to see their lots improve. But because he has no ideas, and is not the politician that well-intentioned Liberians expect to see in the 21st century, he is now making a fool of himself in the upper chambers.

And as if that is not enough, he says he still wants to be president of Africaâ€™s oldest republic.

When he ran for the Liberian senate, eventually defeating Robert Sirleaf, the son of President Ellen Johnson Sirleaf, not only did the former world footballer brandish his proletarian credentials, but his victory showed that Liberians wanted men of humble beginnings to help solve their problems instead of the well-connected.

But what we have today is a man in George Weah, according to reports, who does not understand public policy or how to use his enormously powerful position to bring the change his constituents expect.

If his election was meant to showcase Weahâ€™s capabilities as a leader to whom the Liberian people would look for substantive leadership, Liberians would be fool hardy to vote this man into the Executive Mansion come 2017, given his senatorial record of date.

He is simply not ready and not the kind of leader we hope to see standing beside an illustrious Tanzanian Pres. John Magufuli and Nigerian Pres. Muhammadu Buhari â€“ two African leaders that are leading the way in showing how governance should work in Africa in this day and age.

Liberian political leaders should be brought under the spotlight and radar for the way they handle themselves in public offices.Â For they get paid on tax payerâ€™s dime.

Unfortunately, when that is done â€“ whether it is Joseph Boakai being questioned for taking thousands of dollars to go visit a private investment in Lofa county, or former warlord Prince Johnson playing the ethnic politics to garner votes and deny Liberians the real chance of electing their leaders genuinely, or Ellen Johnson Sirleaf justifying nepotism and patronage as she relegates the interests of the country to her family and friends â€“ sooner than later you will hear their supporters and hired sycophants reacting, swearing, and defending their masters.

In this posturing, they jump from one government to the other singing praises to please the egos of leaders. Itâ€™s no wonder we have less honest men in our public service â€“ because those who dare to stand up are soon chopped down.

George Weah has these praise singers who never tell him the truth. It seems he does not have the intelligence to be the trailblazer Liberians want today â€“ a leader who comprehends the nitty gritty of political governance and what it means to transform a post-war and post-Ebola nation.

Weah is a disappointment; his silence and that of the Congress for Democratic Change has been a stab in the back.

For men like Weah and his staffers, it doesnâ€™t matter what happens at the biggest hospital in the country, which is found within his electoral district.

Hereâ€™s a man who sits on the health committee, and has said nothing about the John F. Kennedy Medical Center crisis, where poor management is driving the hospital into the ground and killing people of curable diseases.

Though he had no transformative platform when he ran as a candidate for senate, the kids in New Kru town, West Point, Clara town, and Duala overwhelmingly voted for him, believing he would fight for them.

What a disappointment. Their lots have not changed. And Weah sits comfortably drawing about US$20,000 a month on tax payers. Weah has made no impact as a senator. And it was time to call him out.

Politics in Liberia is stagnant, due to years of patronage. You only get rewarded when you praise the president, and it is almost a taboo to criticize our political leaders â€“ you get punished. They hate being told the truth; they think a government job and office is a private privilege. No it is not!

But soon they leave office, the country goes back to being a mess as thereâ€™s no long-term agenda in the peopleâ€™s interests. And we have been at this since 1847.

We hope 2017 will be an exception, because leading a post-war reconstruction nation with so many needs requires letting these men and women know that it cannot be business as usual. And George Weah at this point, it seems, is clueless about senatorial and presidential politics, because the challenges facing Liberia are formidable.

And it is not clear where he fits in the mix. You cannot call yourself a political opposition and a senator when the health care needs of Liberians are frightening and you have nothing to say. You cannot say you want to run for president when you are on the health committee while the hospitals are lacking equipment, staff and poor management, yet you have not called for a single hearing.

Ritualistic killings and innocent Liberian citizens are going missing as the security situation in the country frizzles, and yet you have nothing to say. The economy is going down the drain, with Liberia currently running huge deficits and budget shortfalls almost yearly and still you have had no input.

However, you called yourself the political leader of the â€œbiggest grassroots party in the country.â€ Yâ€™all see bad luck!

And this is why Weah’s political ambitions are dogged by discernments that he is not politically ripe and ready to be president of Liberia. And if his followers have been looking at his act since going to the Liberian assembly, they would have been bold and told him so.

But not in a place called Liberia, where we prefer to not face the facts. We would rather lie to ourselves and suffer while praising these fickle men of no substance.

Today, Liberia needs leaders who can fix their problems and get handsomely paid for it. Not men who do not understand what governance is all about, but rather in the game as if it were popularity contest. Weah would be better off serving at FIFA, for he seems not to be the Liberian leader we expect in the 21st century.

The verdict is out. And it is no secret that Weah is not ready and that 2017 will be a dogfight for the Executive Mansion. This is probably Liberiaâ€™s most important election.

For once, it is all clear now: George Weah does not embody the hopes and aspiration of the Liberian people. The Liberian press has a role to play in these elections. They must tell it as it is, this is Liberiaâ€™s future. There are candidates who should not be running in these elections, because they have nothing manifold to contribute. If the press is the guardians to Liberian democracy, then let the interest of Liberia supersede the egos of these politicos. Weah is not ready!