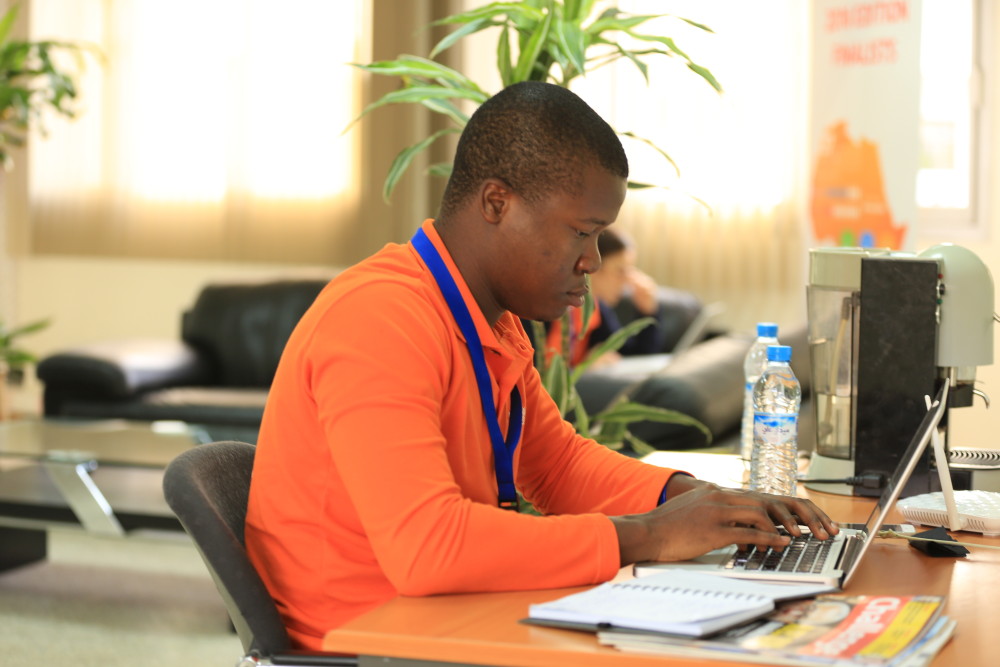 On a damp and cold Friday morning, I walked briskly into J-Palm Liberiaâ€™s new office right opposite the high-end Kendeja Resort in Paynesville.

Just the day before, my team and I had finalized the concepts behind two exciting new promotional campaigns for our natural skin and hair care oil, Kernel Fresh. One of our campaigns featured the popular Liberian singer and activist Miatta Fahnbulleh, and the other featured Wilson, a young man who had used Kernel Fresh to clear pimples and dark spots from his face, after years of using chemical-heavy products that never seemed to work long-term.

That Friday of May 13, 2016, I walked into the office brimming with excitement and new ideas on how to improve the initial concepts we had hashed out. I asked my colleague to help us turn on the generator. The machine was not there. In Liberian parlance, â€œthe machine said â€˜find me.â€™

We quickly realized that we had been robbed. Overnight, thieves broke through one of the windows and made away with almost all our valuables â€“ laptop, projector, generator, chairs, and so forth.

The most baffling and frustrating item they stole was a bag containing the sticker labels for our product, Kernel Fresh. At the time, Kernel Fresh was being sold almost exclusively in supermarkets and convenience stores. Consumers were just catching on, and sales were growing â€“ albeit slowly. With all our labels gone and limited cash on hand, we could not immediately fulfill the few orders we had received from the supermarkets.

We had a few suspects in mind and called in the police to begin the investigation. About an hour later while the police were taking our statements, we received another bombshell phone call: our companyâ€™s truck had been involved in a horrible accident right outside of Ganta, Nimba. The entire truck had somersaulted and was badly damaged. Thankfully, no one was injured during the accident. On of J-Palm’s palm kernel trucks. Photo courtesy of J-Palm

Now, Iâ€™m not normally a superstitious person. But I began to question fate. What are the odds that my entire (professional) world would seemingly come crashing down on the same day â€“ Friday the thirteenth, a day widely noted across the world, and documented in literature and media, as an unlucky day? Was someone trying to â€˜witchâ€™ me? Was this the end of my company, after three years of excruciating sacrifices, challenges, and hard work?

Given the shocking accident news, we immediately placed the police investigation on hold. I called a buddy to accompany a colleague and me on the drive up to Ganta. I was in such a state of shock that I barely remember much from the five-hour drive. One thing I do remember thinking to myself was, â€œWhatâ€™s next? How do we get out of this fix?â€

What happens when individuals or, in this case, organizations, face setbacks so shocking that they can barely survive? How do people and organizations rise up from the ashes of such unfortunate events?

The two main options, it seems, are either to buckle down under the weight of the event, or to use it as a basis for a new beginning â€“ a renaissance of sorts.

We chose the latter.

First, we counted our blessings. We recognized that it could have been so much worse: our colleagues could have been seriously hurt or killed in the accident, and the truck could have run into and possibly killed pedestrians. None of these things happened. Plus, the truckâ€™s engines still worked perfectly, and so we only had to do some welding and repair works on the exterior.

My team and I immediately knew that we had to scale down, to return to our roots. Given that our lease was almost expired, we chose to temporarily relocate the company to my parentâ€™s garage (where it all started back in 2013).

Indeed, as noted American economist Paul Romer once said, â€œa crisis is a terrible thing to waste.â€ The experience forced us to develop laser-focus on pursuing growth options that were absolutely the most optimal for the business.

An oft-repeated phrase on my favorite entrepreneurship TV show, Shark Tank, is: â€œSales cures all.â€ We knew that the only way we could recover from the tragedy was to significantly ramp up our sales organization. We eliminated all activities and events that did not contribute unambiguously to our sales growth.

At the time, we had to choose between working to get Kernel Fresh into more retail stores â€“ despite the fact that only a small fraction of middle-income earners shop there â€“ or to introduce smaller sizes of the product and price them for the mass-market. We chose to test out the mass-market approach.

The Sales Representatives model, we quickly realized, was best suited for a new product such as Kernel Fresh that requires explanation and demonstration. With a little training, we saw our sales representatives generate in a week, more than what the retail stores could sell in a month.

Beyond the numbers, working with sales representatives allows us to see more clearly the impact we make. For example, Jack Moses, one of our representatives, used to make L$4,500 (US$50) working as a security guard at a bank in Gbarnga. During his one-week trial period at J-Palm, he earned a commission that exceeded his monthly salary in his previous job.

Within three months of working at J-Palm, Jack has rented out his own apartment in Paynesville and has relocated his wife and daughter from the rural area to live in the city.

Another sales representative, Annie Hiama, recently had an opportunity to meet and talk about Kernel Fresh with President Ellen Johnson Sirleaf, as well as with Crown Prince Haakon of Norway during a recent visit to Liberia. Annie remarked during a recent meeting that as a young woman, she believes it is important for her to earn her own income instead of â€œrelying on boyfriends or sugar daddies.â€

Motivated by these results, we applied to the Johnson & Johnson Africa Innovation Challenge in December of 2016. Out of almost 500 applications, J-Palm Liberiaâ€™s Kernel Fresh was one of the three winners chosen.

As part of the award, we get to work with Johnson & Johnsonâ€™s incredible team of scientists and engineers to conduct further research and testing on Kernel Fresh, to strengthen internal systems and processes within our marketing and sales team, to develop new product lines, and most importantly, to scale our Sales Representatives Program to create jobs for 1,000 young people to work as sales representatives for Kernel Fresh.

This partnership with the worldâ€™s largest consumer healthcare company is exciting for us in so many ways. First, it creates much-needed employment for so many young men and women who, like Annie, can earn decent wages to take care of themselves and their children. Additionally, as demand for Kernel Fresh grows, so does demand for palm kernels in rural communities. Instead of wasting the kernels, more smallholder palm oil producers will now have the opportunity to earn extra income by selling their kernels to J-Palm Liberia.

Today marks the one-year anniversary of our â€œtwin shocks.â€ At the time, it seemed like a curse. But we turned it into a blessing. It hastened our decision to build our Direct Sales team, to eliminate unnecessary spending, and to focus our efforts on the things that matter most: expanding our distribution channels to serve our customers wherever they may be; delivering consistent, high quality and affordable products; and creating hundreds of jobs for Liberian youth. These changes have made all the difference for us, and have enabled us to build a more stable and sustainable company.

While we hope that we do not face similar stressful setbacks in the future, we are grateful for the direction in which our Friday the Thirteenth tragedies led us. Indeed, as Steve Jobs said in his popular 2005 Stanford University commencement address, â€œyou canâ€™t connect the dots looking forward; you can only connect them looking backward. So you have to trust that the dots will somehow connect in the future.â€

Friday, March 13, 2016 seemed like the end for J-Palm Liberia. Looking back, itâ€™s clear that it was just the beginning for us.