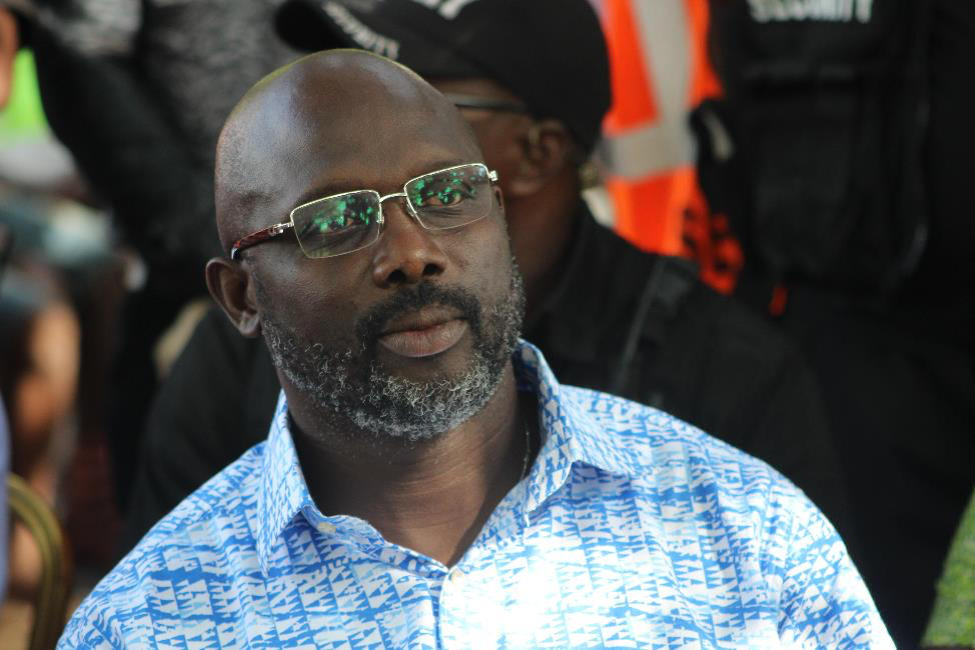 No one doubt that President George Weah is a master dribbler. He has the medals to show for this claim. And in the political realm, master dribbler Weah has also exhibited quite some dribbling skills on the likes of Brumskine, Tubman, and Sirleaf.

In politics, however, a dribbler is view quite unfavorably, more as a schemer. And in no small way, President Weah sold ordinary Liberians the â€œChange for Hopeâ€ scam that he was that only candidate who had Liberia â€œat heartâ€ â€“ that he was a multi-millionaire who would not hesitate to use his â€œown moneyâ€ to make Liberia just like Europe.

Liberians bought into this scam, with such high hopes, that the boy from Gilbratar (a Monrovia slum), the peace ambassador, was on the verge of making Liberia that â€œshining city on the hill.â€

And so, on January 22, 2018, George Manneh Weah, with the utmost pageantry, and formality promised Liberians thus:

As officials of government, it is time to put the interest of our people above our own selfish interests. It is time, to be honest with our people. Though corruption is a habit among our people, we must end it. We must pay civil servants a living wage so that corruption is not an excuse for taking what is not theirs. Those who do not refrain from enriching themselves at the expense of the people â€“ the law will take its course. I say today that you will be prosecuted to the full extent of the law.

A majority of Liberians, especially the most financially vulnerable, the youths, and some, still beholden to the country-congo rhetoric, really took Mr. Weahâ€™s words at face value â€“ that he always meant what he said and said what he meant. But alas, we Liberians have now come face-to-face with the real Weah â€“ that he is nothing more than a hustler, a charlatan and, of course, a big schemer. His inaugural address was just the beginning of more schemes to be perpetrated against the Liberian people.

Given how the issue of corruption dogged his predecessor, former president Ellen Johnson Sirleaf, one would have thought President Weah would have learned from the history of his immediate predecessor.

Other cabinet officials are now chasing President Weah for second place in the looting of the public treasury.

Both reports, directly or indirectly, call for a forensic audit of the mop-up exercise, in order to lay bare what actually happened and ostensibly to hold to account persons whom the forensic investigation will find culpable.

The Presidential Investigation Team was more direct in calling for forensic investigation when it wrote:

Given the many discrepancies noted in the manner in which the mop-up exercise was conducted in relation to the infusion of the US$25 million into the Liberian economy, and the scope, time and financial resources limitations of the [Presidential Investigation Team], the investigation recommends that the [Technical Economic Management Team] and [the Central Bank of Liberia] put a halt to the exercise and that a forensic investigation of the entire mop-up exercise be conducted without any delay.

The Kroll Associates Report, for its part, put this brazen criminality more diplomatically:

The approach taken by CBL in the (US$25 million) mop-up exercise created an enhanced risk with respect (1) misappropriation of funds (2) money-laundering and (3) illegal transactions; that economic and financial crimes were committed. Consequently, there is a risk that significant funds were unaccounted for by the CBL, and Kroll, therefore, recommends that this matter merits further understanding

What other way does one fully uncover criminal acts if not by detailed criminal investigation (i.e. forensic audit/investigation)? However, even as the screws were tightened, President Weah chose to continue scheming on the Liberian people. Instead of immediately sanctioning full forensic audit of both the L$15 billion and US$25 million scandals, he went for the arrest of those from the Unity Party regime while kicking the US$25 mop-up further down the road.

It is important to note that even the Kroll report people termed their work as â€œscoping report,â€ whose relevance was only to â€œascertain the basic facts of the alleged disappearance of new Liberian dollars banknotes, and to determine to what extent a broader (more comprehensive) investigation would be required into the matter.â€ The Kroll report was written in plain English and its intent was to gather some basic facts to enable the government to launch a full-scale criminal investigation.

But George Weah, ever the wizard dribbler and grand schemer, decided to dribble Liberians once more. To prevent a full investigation of the US$15 billion scandal, the president opted to foreclose on the matter by issuing premature indictments against members of his predecessorâ€™s regime while preventing a further investigation that could possibly implicate his own.

The president should know that while we donâ€™t doubt his master dribbling skills, we too are not fools. The L$15 billion scandal investigation was never completed because he wants to prevent possible indictment of his Coalition for Democratic Change people by preventing any full-scale investigation.

Additionally, the president further demonstrated his dribbling skills on us Liberians when he publicly called for a forensic audit of the US$25 million mop-up exercise to be conducted by the General Auditing Commission, while privately having his officials direct and limit the scope of the GAC investigation.

What kind of president says one thing in public and does quite the opposite in private? The GAC, not surprisingly, was compelled to note in its report that its review of the exercise was not an audit (whatever that means) but an Agreed-Upon Procedures review of the mop-up exercise. Not surprisingly, the GAC could not reach a conclusion since â€œproceduresâ€ used was so esoteric. Here is the GAC statement as written in their report:

Because the above procedures do not constitute either an audit or a review made in accordance with International Standards of Supreme Audit Institutions or International Standards on Review Engagements, we do not provide any assurance on the direct mop-up of excess liquidity conducted by the Central Bank of Liberia for the period July 17, 2018 to March 21, 2019.

As we say in Liberia, â€œwhen chicken white, ay (itâ€™s) white.â€ Despite attempts by grand schemer Weah and his acolytes to fix the outcome of the GAC review by limiting the scope, the result of the GACâ€™S work was still disastrous. In essence, â€œthe chicken was not whiteâ€; it was dirty-muddy brown. And when the report came out, grand schemer Weah was still not ready to â€œthrow in the towelâ€ and call time on the rogues in his regime. President Weah, ever the schemer, has now decided that we Liberians are fools. In fact, the president sees us as his donkeys he continues to take us for a ride.

President Weahâ€™s latest scheme is to gloss over the GAC report, maintain his corrupt officials, and even â€œretireâ€ Central Bank Executive Governor Nathaniel Patray with US$500,000 of taxpayersâ€™ money for messing up the economy and the Central Bank.

The president has now decided that having three reports reach the same conclusions is not enough. He wants a fourth and possibly a fifth report on the mop-up exercise. It is public knowledge that he has asked the Liberia Anti-Corruption Commission to investigate for the fourth time.

Of course, this too is another scam, as the LACC currently has no commissioners. It has one officer-in-charge of Charles Gibson. The rest of the commissionersâ€™ tenures have expired. The president is well aware of this fact because the departures of James Verdier and Augustine Toe as LACC commissioners was public information.

Also, other commissionersâ€™ tenures (including Hamilton Dolo and Gibson) also expired. Why send an active investigation to a non-functional commission? The LACC act provides that the decision-making powers of the commission lie with its five-member Board of Commissioners. It is simply being disingenuous to ask a commission that is without leadership to take over the investigation of major national financial scandal. But as I stated earlier, this president has been taking Liberians for fools for so long that he simply does not know when to stop.

Minus the LACC, the other major economic crimes-related investigative agency is the Financial Intelligence Unit, apparently the same institution that led the multi-agency Presidential Investigative Team report. The FIU is similarly plagued by the same LACC malaise. The tenures of the FIU key officers expired in March 2019.

President Weah is well aware of the expiration of the tenure of the FIU directors. But, of course, he has opted to do nothing about this dysfunction at the FIU. In the interim, the current director continues to stay on board, collecting salaries and allowances, and even attending international conferences, howbeit, thoroughly without mandate. Perhaps this is what President Weah and his Coalition for Democratic Change means by â€œchange for hope.â€

Left to this president, things should just stay as is. The LACC and the FIU should just remain dysfunctional, without direction from appointed executives or directors. It seems the tacit code is that no integrity institution of the government should function, since in the mind of the president when it comes to fighting corruption, â€œwe are all related.â€

Lest you forget Mr. President, Madam Sirleaf and the United Party played similar â€œmonkey tricksâ€ with the fight against corruption and impunity. In her case, she was lucky to get 12 years, before the noisy minority finally struck. In your case, make no mistake, if you fail to fight corruption and impunity, the end might come much sooner then you expect. June 7 was just a teaser. Be reminded, Mr. President, Liberians are not fools!