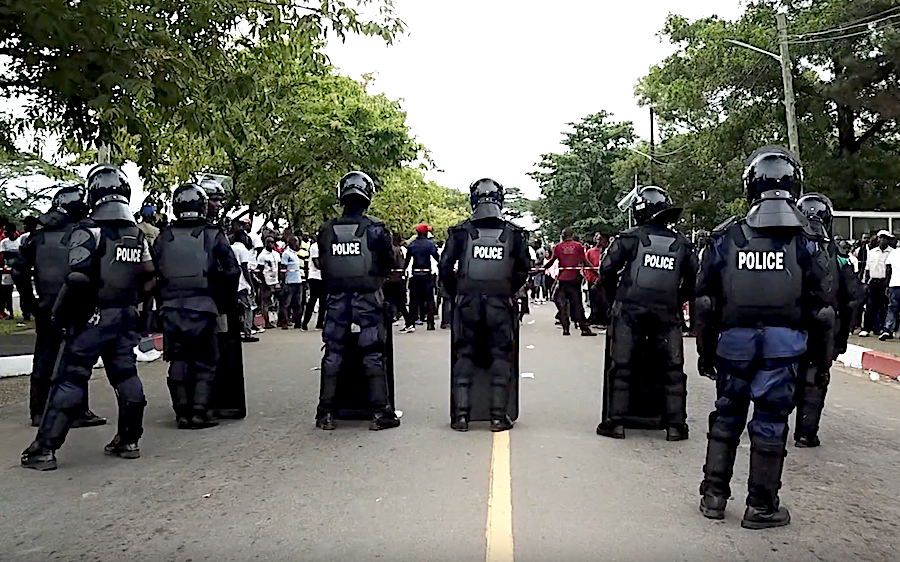 On June 7, during a mass citizen protest against rising government inefficiency, economic hardship, public mismanagement, and incompetence, the Government of Liberia said it blocked social media for â€œnational securityâ€ reasons. Many, especially the press and civil society organizations, have labeled it as a way of curtailing free speech and muzzling the press.

This was following a planned protest by the Council of Patriots, an umbrella organization of collaborating political parties and a host of proxy groups citing the governmentâ€™s inability to address corruption, a selective judicial system, economic collapse, increase in the price of basic commodities, etc.

Though the protest leaders denied that they wanted to unseat the president, there was a general panic in Monrovia in the days leading to the protest. Some businesses opted for a day off, while many stayed home, in anticipation of a violent outcome. This never happened.

The recent waves of protest and public outcry against Pres. George Weahâ€™s government are signs of massive dissatisfaction and impatience with his rule. Just one year into office, the government has endured criticism for siphoning millions of dollars in public funds.

The unjustified disbursement of donorsâ€™ funds, the untraceable disappearance of printed monies from the Central Bank, and theÂ lack of accountability in Liberiaâ€™s public financial management system fuels into the culture of corruption that has become a burden on the nation â€“ as it has been discussed in numerous newspapers, on social media, and on radio talk shows.

Under the Weah government, the prices of basic commodities have increased while the government has shifted blames on its predecessors for leaving a freefalling economy. While both parties keep blaming the other, Liberians are faced with a disintegrating economy and a fragile state that the government is proving incapable or unwilling to fix.

Itâ€™s hard to pinpoint whoâ€™s responsible for Liberiaâ€™s current economic collapse, but the economy, from all indications, is in shambles. Even if one could blame the current economic conditions on the past regime, the Coalition for Democratic Change must have understood this before making a bid for the presidency. They must have recognized that the country was a mess, yet they vouched to fix it with alternative policies and economic measures.

Liberians from all walks of life have claimed they voted for President Weah because they believed he was up to the task to deliver rapid economic growth. They believed he would have adopted social and economic policies to improve the livelihood of Liberians. Therefore, his frequent complaints of taking over a ruined economy is a sign of his unwillingness and unpreparedness to run the state and engineer an economic revival.

â€œNo one comes to public office expecting the path to be rosy and romantic,â€ said Suakollie, one of the June 7 protesters. Suakollie believed that because Weah grew up in a low-income family, he would best understand the Liberian condition. He feels betrayed and let down by a government he was willing to put his life on the line for.

â€œGovernance is not honey or bread â€“ itâ€™s a constant struggle of accepting blames, assembling the right team, and reaching out for help when required, like now,â€ he said to me while wiping tears from his face.

A father of three, Suakollie said before Weahâ€™s presidency, 500 Liberian dollars was enough for a day to meet his familyâ€™s needs. â€œSituations now are different, and we are expecting a hike in prices by the minute,” he said.

Just like Suakollie, many believe the leadership is locked in a spasm of lack of understanding, contradiction, and a media propaganda against progressive forces that are at least attempting to keep the system in check. The arbitrary imprisonment of student activists the day before the protest from the University of Liberia is evidence of this.

Protesters believe that public institutions serve at the whims of the president.Â Recently appointed government officials are mostly loyalists from the ruling Coalition for Democratic Change. Most of them are believed to be inexperienced with scant understanding of government functions. With the appointment of pawns of the party based on political patrimony, many wonder how sincere the Weah government is to think it can deliver economic growth with a highly unskilled team of loyalists who have developed a taste for luxury at the expense of a crippling economy.

Just four months in the presidentâ€™s tenure, L$16 billion allegedly evaporated without a trace. In addition to officials craving for early success, the president himself is reported to be building private properties across Monrovia.

As the president has failed to tackle corruption and address the maladies in Liberiaâ€™s governance institutions, his regime has shown early signs of authoritarianism by calling critical voices and progressive forces, â€˜enemies of the state.â€™

The culture of the system Weah inherited is a complex one based on patrimony and institutionalized corruption that takes more than an individual to address. It requires more than the normal Liberian party allegiance to providing basic social services. Addressing Liberiaâ€™s institutional corruption requires a concerted effort, skills, and expertise to foster solutions for economic and social development.

The Aftermath of June 7

On June 11, the president addressed the public by radio where he invited leaders of civil society organizations and religious groups to discuss a way forward for the nation. Itâ€™s highly doubtful that the president is committed to a dialogue that would lead to a change in the issues Liberians are faced with and so eager to address. Just like his predecessor, heâ€™s likely opening another episode of House of Cards to position himself as genuinely willing to listen and actâ€”when itâ€™s the opposite.

People like Suakollie have expressed that â€œgovernance is not friendship club; it requires skills, and experience is crucial to public service, especially if one is committed to delivering desirable results.â€ It requires a vision for long-term development for the country instead of oneself.

But the Weah government, as Liberians across the country, has demonstrated it is not about service to country or nation-building.

Instead of calling for a dialogue, the president could even sit from the comfort of his office and appoint more competent Liberians to handle the countryâ€™s economic issues. Calling for a national dialogue on the state of the economy is a good step, but how will these dialogues be conducted? Will it consider voices across the country from workers unions or just Council of Patriots members or religious leaders?

Will other counties other than Montserrado, normally excluded from major political activities, be involved in the process? What is the organization of the dialogue and whatâ€™s the end goal? Is the president willing to implement suggestions for economic development? And whatâ€™s his history of paying attention to people who disagree with him?

How does one trust a president with a great distaste for dissent â€“ as demonstrated in the presidentâ€™s shut down of social media?

For everyday Liberians, itâ€™s their lives thatâ€™s at stake. Itâ€™s survival of their children they are after. Itâ€™s the security of their jobs that they worry about â€“ and the tears they shed must be the message the president listens to in decisions he makes going forward.

They are not the enemies of the state. If anything, they are the reason the state exists. And the government, through a national commitment for economic development, must fulfill its social contract with the Liberian people through job creation, security, welfare, health and other essential elements of meaningful lives.

16 hours ago by Jerry Myers