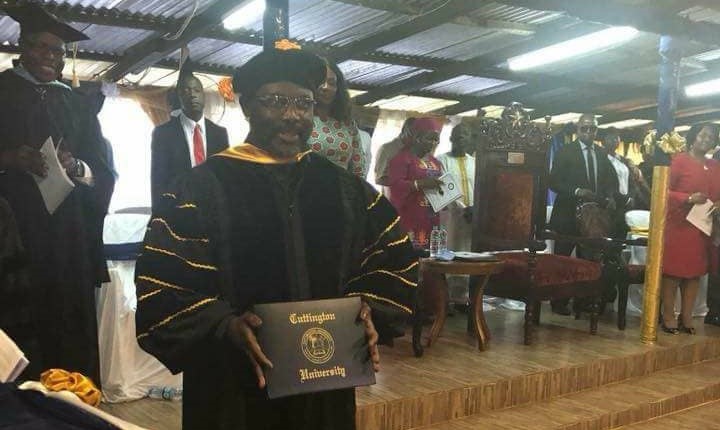 This June, President Weah was honored by Cuttington University in Liberia with an honorary doctorate degree for his “par excellence” activism and “selfless services to humanity.”

Honorary doctorates, or honoris causa, have a long history dating back to the 15th century. They’re typically bestowed upon individuals as an acknowledgment of their accomplishments — and as a reflection upon the conferring university. That is, to show that the university values such contributions. It’s not uncommon for politicians to receive honorary degrees.

What is uncommon, however, is for recipients of honorary doctorates to use the title “Dr.” or allow others to refer to them as such. Former President Ellen Johnson Sirleaf holds several honorary degrees, but she told people to stop calling her doctor.

Not so with President-Doctor Weah. The president is allowing everyone to call him Dr. Weah.

Many universities explicitly state that recipients of honorary doctorate degrees should not use the title doctor and just a handful allow it. Though some notable figures including Benjamin Franklin, Billy Graham, and Maya Angelou have used the title, there’s a general consensus that using the title “Dr.” for an honorary degree is in poor form. For a former footballer and sitting president to use it seems both pretentious and tacky. This is a case where President Weah should take a page out of Sirleaf’s playbook and tell everyone to stop.