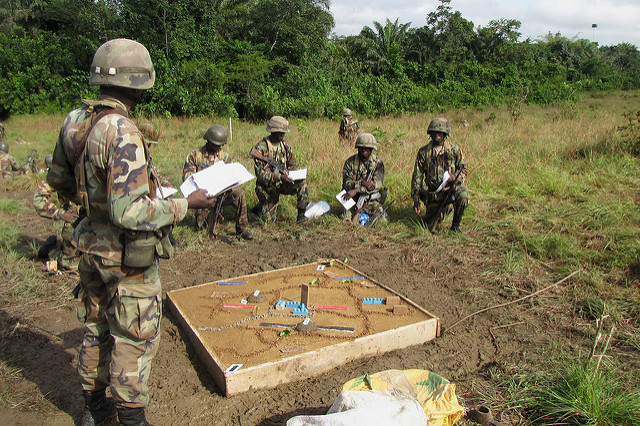 â€œWe have seen terroristsâ€¦targeting Africans and tourists and threatening to undermine many of the gains the region has made over the past years. People, let me tell you, Liberia is not exempt from the threat.â€ The US State Departmentâ€™s Assistant Secretary of State for African Affairs, Linda Thomas-Greenfield, delivered these words in an address at Monroviaâ€™s African Methodist Episcopal University during her recent trip to Liberia.

In March, the Ivorian coastal resort town of Grand Bassam was targeted by Islamic militants linked to Al-Qaeda in the Islamic Maghreb. This event seems to be the primary calculus behind the new alarm. Thomas-Greenfieldâ€™s view was shared by the UN Panel of Experts on Liberia, whose final report stated that â€œterrorist attacks in CÃ´te d’Ivoire heighten security concerns in Liberia.â€

These recent utterances are emblematic of the short-sighted nature of many policymaking elites and analysts. Just fifteen years ago, Charles Taylor was criticized for allowing representatives of Al-Qaeda to operate on Liberian soil. Thirty years ago, the United States was doing everything it could to ensure that Samuel Doe did not cozy up to Gaddafiâ€™s Libya.

Liberia would certainly represent low hanging fruit for a determined terrorist group. Slightly more presciently, last December, Charles Brumskine of the Liberty Party, urged the Bureau of Immigration and Nationalization to institute a number of reforms to safeguard the country. A number of upmarket hotels and restaurants in Sinkor and Central Monrovia crawl with expats and are easy targets. In a nod to this heightened sense of alarm, Royal Grand Hotel has installed a barrier at its gate, a mostly cosmetic security gesture. Visitors on foot are not at all screened.

In the aftermath of terrorist attacks in more sophisticated, overwhelmingly Christian urban African centers like Kampala and Nairobi, it should not have taken a terrorist attack in CÃ´te d’Ivoire to bring home the reality of Liberia as a possible target for the US State Departmentâ€™s top African diplomat or the UN Panel of Experts. In Liberia, where irate motorcyclists can burn down a police station and immigration personnel at checkpoints operate without electricity or any sort of modern equipment, there is certainly the capacity for all sorts of things to go wrong.

A number of Liberians have been convicted of mercenary attacks on UN peacekeepers in CÃ´te d’Ivoire following the fall of Laurent Gbagboâ€™s government. If a modest payoff can result in attacks on UN forces, it shouldnâ€™t be inconceivable that similar motivation could inspire a terrorist attack on civilians. The push to declare Liberia a Christian state and the arguably second class status of Muslims in Liberia doesnâ€™t help either.

Yet, this logic can apply to many of Liberiaâ€™s neighbors. If CÃ´te d’Ivoire was a target, the demographics and conditions of Ghana are quite similar, with a more highly developed economy offering more traditional targets, like shopping malls. In Sierra Leone, a number of Lebanese nationals are barred from conducting business with US entities due to their perceived ties to Hezbollah. Meanwhile, Guinea, with a renowned heritage of Islamic resistance to Western imperialism, is overwhelmingly Muslim, even more so than Burkina Faso, a nation now perceived as being firmly on the front lines in the battle against Al-Qaeda in the Islamic Maghreb.

Yes, the attack at Grand Bassam expanded the front lines of the so-called War on Terror. But if policy elites should know anything, it is that fragility breeds unfortunate outcomes. It seems the Grand Bassam attacks were a surprise; they shouldnâ€™t have been.

The new discourse and alarm may get Liberia some more money to buy cars and enable a few limited additional training opportunities for army officers and staff at the Bureau of Immigration and Nationalization. But if the aim of the international community is to pray that a handful of cosmetic gestures actually work, then the long-term development of capacity and the ability of Liberia to legitimately respond to these concerns will not be strengthened.

It is not haphazardly addressing the Westâ€™s concern of the month that will lead to stronger security conditions in Liberia. Building competent institutions that function for their all-around purpose will. In that context, it is unclear what Thomas-Greenfield hoped to achieve by her remarks, other than highlighting the paradox of her otherwise effusive praise for President Ellen Johnson Sirleaf, who hasnâ€™t even been able to leverage the funding boom from the Ebola crisis to establish modern restroom facilities at Robertsfield International Airport.

Featured photo by US Army Africa