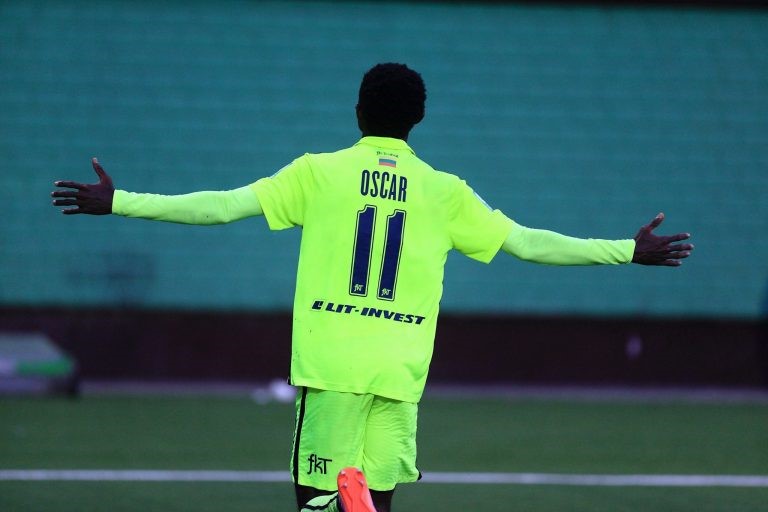 Two years ago, while playing in the midfield of little known Liberian side, Monrovia Club Breweries, not many Liberian football followers were thinking that little Murphy Oscar Dorley would be playing in Europe’s second most prestigious club competition, the Europa League.

He left the shores of Liberia in 2015 with the hopes of securing a professional football contract on European soil. After several months being out of Liberia, there was no information about the kid who had just made his senior debut with Liberiaâ€™s national team.

His absence from the local league and the lack of news about him on the international scene sparked concern and frustration among local fans who believed it would have been better had Dorley remainÂ playing in the local league until it was time to move over to greener pasture.

All speculations about Dorley finally came to an end in August 2016 when he signed a three-and-a-half-year contract with the top tier Lithuanian club, FK Trakai, after his 18th birthday. Liberians welcomed the news and hoped to see little Oscar Dorley return to competitive football.

However, after joining the Lithuania A Lyga club, there were some doubts that the 18-year-old might now have a place on the first team as he had not played professional football for some time and had previously come from a substandard league.

However, he proved his doubters wrong as he immediately became a key figure on Trakaiâ€™s squad in the second phase of the league. He made 13 appearances and scored three times to help his new club finish second in the league table.

He returned sharper for the 2017 league season and became not only FK Trakai’s best player, but the best player in the Lithuanian league for the second phase. Dorley won the best player award following another brilliant performance for Trakai, scoring five goals from sixteen appearances. Going from one of the best players on Club Breweriesâ€™ team to the best player in the Lithuanian A Lyga, the stage was set for the youthful Liberian international, whose club was set to play against Scottish Premier League side, St. Johnstone Football Club, in the first leg of the first qualifying round of the 2017-18 Europa League.

However, it was a different story after the sound of the final whistle in Perth on Thursday night as Trikai became the surprise winner, despite ending the match with 10 men after Vaidotas Silenas was sent off in the 82nd minute.

The Lithuanian side managed a narrow 2-1 victory away from home to stand a better chance of going through to the second round ahead of the return leg in Lithuania on July 6. First half goals from Russian attacker Maksi Maksimov and Lithuanian midfielder Vaidotas Silenas were enough to give Trakai all three points against the Scottish side that got their lone goal through Irish international, Joe Shaghnessy.

Despite playing away from home, it was Trakai that got the opener in the 14th minute through Maksi Maksimov, before Joe Shaghnessy got the score level for St. Johnstone in the 32nd minute. Just four minutes after getting the equalizer, the Scottish side was in search of another equalizer after Trakai went ahead for the second time through Vaidotas Silenas.

Now with the score at 2-1, it was St. Johnstone that was desperately in need of a goal to get things leveled before the sound of the first half whistle. However, they were unable to break through Trakai’s defense as they went to the break with a deficit.

Both sides return to the pitch with high expectations as they both had fireworks early in the second half. Neither could get a goal registered until the 82nd minute when Trakai was reduced to ten men following Silenasâ€™ sending off.

Silenas, who got Trakai’s second goal, was shown his second yellow card for a reckless challenge of Blair Alston. Playing 11 against 10 for the remaining eight minutes, there were hopes of the home side getting the much-needed equalizer. They, however, failed to make use of the opportunity as they failed to score again until the sound of the final whistle.

Dorley and his team will return home on Friday, June 30 and will prepare to host St. Johnstone in the return leg on Thursday, July 6.