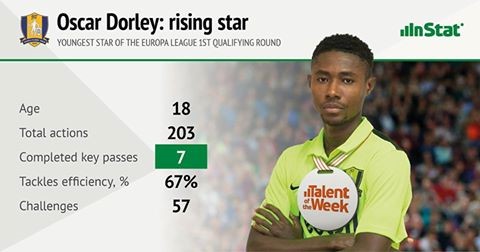 The first qualifying round of the 2017-18 UEFA Europa League has been completed with FK Trakai, the club of youthful Liberian international, Murphy Oscar Dorley reaching the second round at the expense of Scottish Premiership team, St. Johnstone Football Club.

The Lithuanian A Lyga club reached the second round after a 3-1 aggregate win. Trakai won the first leg 3-1 away from home before completing it with a narrow 1-0 win at home in the return leg.

Ahead of the crucial two-leg clash, not many expected for the little-known Lithuanian club to dumb a team from the Scottish Premiership. Trakai’s qualification for the second round made the headlines in Europe, and their success was highly celebrated by their 18-year-old Liberian midfielder, who recorded his name in the history book of the UEFA Europa League qualifiers.

According to one of Europe’s biggest sport statistics media group, InStat Sports, the 18-year-old Liberian became the youngest star of the UEFA Europa League qualifiers.

In the return leg where Trakai got a narrow 1-0 win, Oscar Dorley completed seven key passes, the same number as the rest of the entire FK Trakai players combined. He might be small in stature and overlooked when it comes to defense, but the former Monrovia Club Breweries star went on to make six attempts of tackle with a high-efficiency rate of 67 percent.

Oscar and his team will hope for more European glory when they take on Swedish Allsvenskan side, IFK Norrkoping, in the second qualifying round. Trakai will be hoping for a better result in the first leg away from home on July 13, before completing the success at home in the return leg on July 20.

Judging from their first round performance over St. Johnstone that finished fourth in the 2016-17 Scottish Premiership, Trakai cannot be considered as the underdogs against a Norrkoping that finished third in the Swedish top tier.