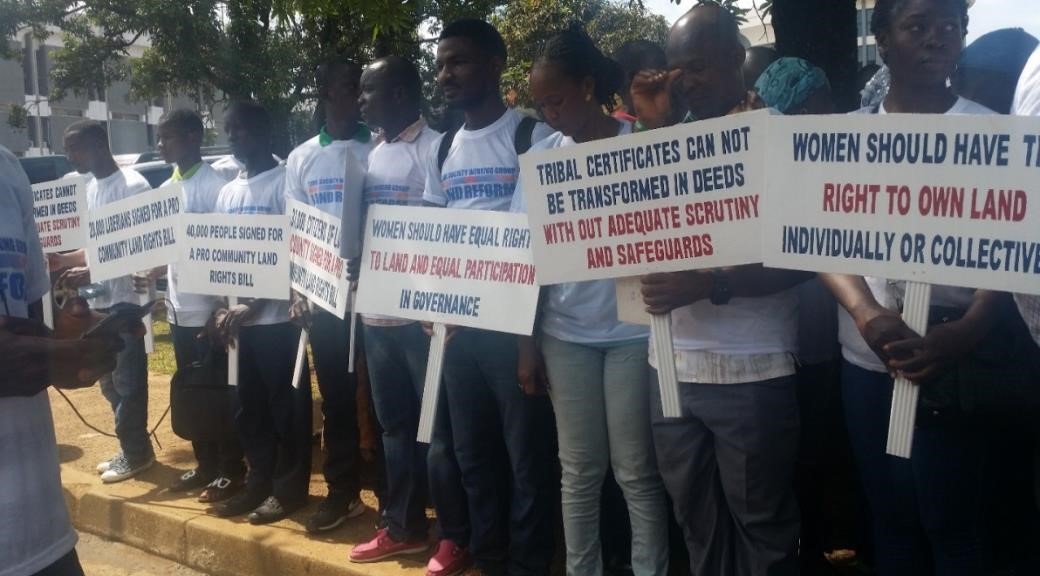 MONROVIA, Montserrado â€“ Over 70,000 signatures supporting the passage of the Land Rights Act have been presented to the National Legislature by a group of civil society organizations.

Viola Lincoln, who read the petition on behalf of the group on Tuesday, May 29 at the Capitol Building, said over 40,000 Liberians and 45 chiefs across Liberia have signed the petition supporting the passage of the bill, which is currently stalled within the legislature.

Lincoln said an additional 30,000 people from more than 25 countries in Africa, the Americas, Asia, and Europe showed their support and solidarity for the passage of the bill.

She said when Civil Society Organizations and communities are excluded from participating in the lawmaking process, communities are left vulnerable to land tenure insecurity, leading to large-scale land transactions and potentially unlawful land grabs by a few groups of national elites.

Lincoln said if passed by the legislature, the bill would empower women and give them the opportunity to have a stake in their communities.

â€œThis land rights bill is important because it will give me the right as a woman even if I donâ€™t have my own deed, especially for traditional people who are occupying land,â€ she said. â€œIn more cases, women are left out of decision making and at the end, we suffer the penalties.â€

Lincoln noted that as a country, Liberia must align itself with democratic principles and acknowledge that community land rights are a universal norm and no longer an exception.

The bill was submitted to the National Legislature two years ago and has been lingering there since.

â€œLand issue is one of the issues around the world that is causing serious conflict, so if this Land Right Acts passes, it will help to bring the many problems to an end,â€ said Oretha Clerk, another woman who was part of the petitioning group.

Clerk said before concession companies go into communities, there should be a common agreement between the community and the company to allow women to have a say, as they are often excluded from these decisions.

â€œSome area where women used to farm, they are not farming there again and itâ€™s causing serious harm for us women,â€ Clerk said. â€œIn most cases, our government officials signed these concession agreements the community donâ€™t know about most of the agreements that are signed and what is in it for the community, so we canâ€™t ask the company to do anything for us.â€

Sen. George Tengbeh of Lofa and Rep. Vincent Willie of Grand Bassaâ€™s fourth electoral district received the petition on behalf of the Committee on Land Mines, Energy, and Nature Resources and assured the petitioners that the bill would no longer linger in the legislature. They promised to do all they can to pass the bill.

â€œWe are working for you citizens, you are the employers and we are the employees,â€ Willie told the petitioners. â€œIf we donâ€™t do what you tell us to do we can be easily dismissed.â€

He said it is important to pass the bill speedily because even in his county there are serious land issues there.

â€œIt is a good thing that yâ€™all keep pushing us and we need to act. Our people need to have ownership to their land; our people continue to live in abject poverty, so if we make this bill to pass the people in all of the villages will one way benefit from their land and their life will improve,â€ Willie added.