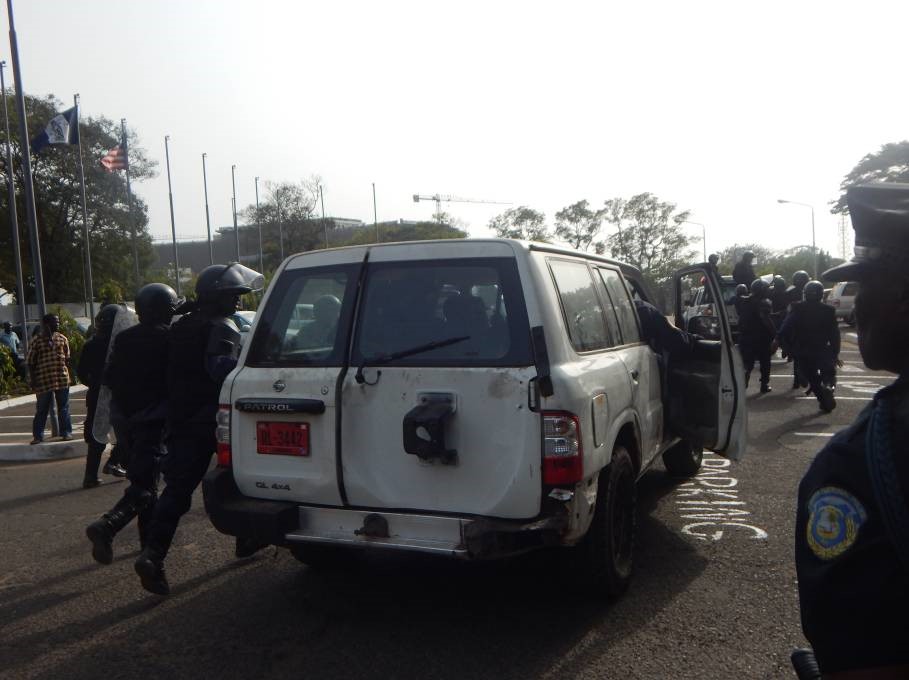 MONROVIA, Montserrado â€“ As detained activist Vandalark Patricks was taken to prison, his supporters have vowed to protest his detention.

Journalists who had turned out at the police headquarters to cover the arrest were denied entry and proceeded to the Temple of Justice where Patricks would be arraigned before court.

The heavy police presence made it difficult to cover the incident as journalists were being pushed around to prevent them from getting shots of Patricks on their cameras.

The grounds at the Temple of Justice became very crowded as many onlookers came to see Patricks brought to court.

It was exactly 4:45 pm on Wednesday that the handcuffed Patricks was brought into the Temple of Justice under heavy police escort.

His supporters began chanting anti-government slogans and even called on the government to arrest all of them. Patricks being transported by the police. Photo: Zeze Ballah

As tension brewed between Patricksâ€™ supporters and the police, additional reinforcement of officers was called in to restore order and Patricks was immediately taken to the office of the Solicitor General.

After several minutes, he was indicted for sedition and criminal libel against President Ellen Johnson Sirleaf.

Tension increased again as supporters attempted to prevent Patricks from being incarcerated at the Monrovia Central Prison, but Patricks was heavily surrounded by police officers who succeeded in putting him in a waiting vehicle.

Janjay Barkpeh, who led a group of supporters at the Temple of Justice to protest the incarceration of Patricks, told The Bush Chicken that he and others would mount a protest. â€œWe have identified President Sirleaf and her government officials as evil against us,â€ he said.

Barkpeh said he and other supporters of Patricks were not afraid of the government, adding, â€œIf President Sirleaf wants to jail us, let her go ahead because we are not afraid being incarcerated for speaking our minds against the government.â€ He said Sirleaf should build more prisons because according to him, the government has such resource to do so, stressing â€œthe hired assassins the government brought to town to eliminate people are still around.â€

Barkpeh said there would be more arrest as the 2017 elections drew closer.