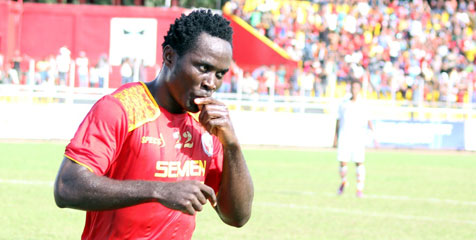 Liberian striker Edward Junior Wilson has ended his two years of playing professional football in Malaysia, as he returns to Indonesia for his second spell in Indonesia football.

Wilson signed a short-term contract with Persipura Jayapura, and will be handed the number nine shirt for the remainder of the 2016 Indonesia Soccer Championship.

Wilsonâ€™s arrival at Persipura has seen his fellow Liberian, James Koko Lomell, dropped from the team.

Lomell joined Persipura before the start of the 2016 league season, but has since failed to impress at the club. He was dismissed in keeping with the rules of the Indonesian Football League, which allow teams to feature only five foreign players.

At Felda, Wilson became a hero in his first season with the club, helping them gained promotion to the Malaysia Super League. He ended the 2014 season as the highest goal scorer with 19 goals.

Persipura head coach, Angel Vera, described Wilsonâ€™s addition to the team as beneficial because of his experience with the Indonesian league.

â€œWe are happy to get Wilson over because of his experience,â€ Vera said. â€œHe is good at scoring goals, and that will help the team. At this stage, we need to be consistent in winning, and he will help us a lot.â€

Persipura currently sits fifth on the league table with 28 points from 16 games.