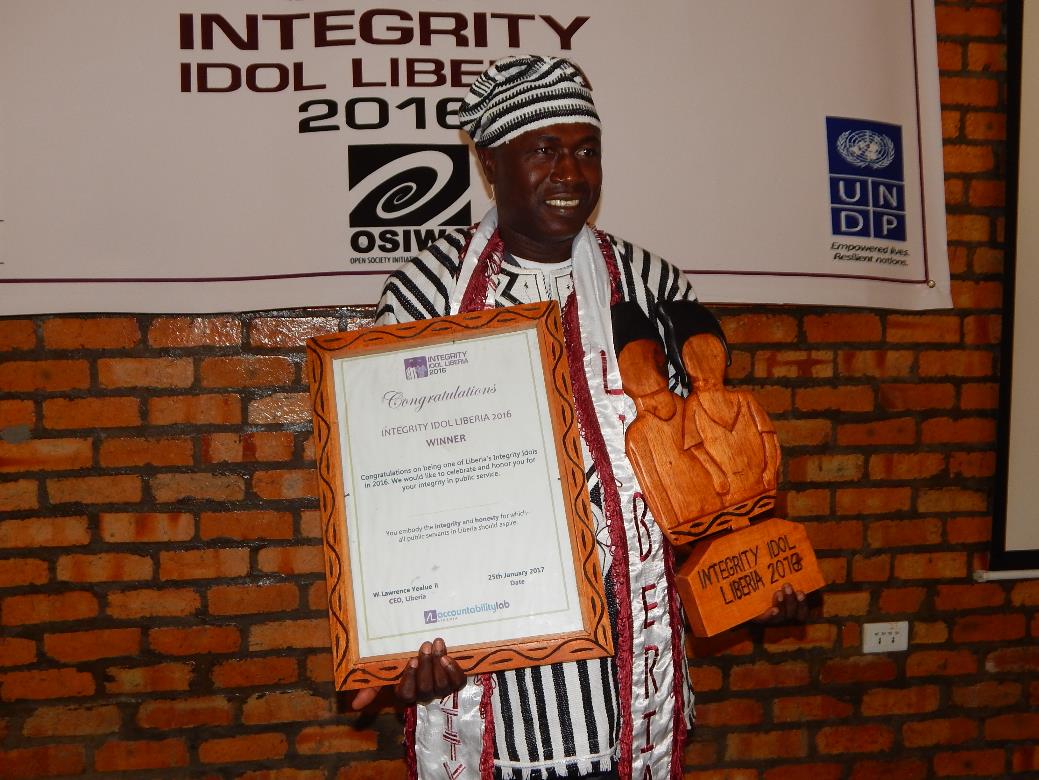 MONROVIA, Montserrado – A pharmacist in the government hospital in Tubmanburg, Bomi has been named the Integrity Idol winner for 2016.

Bockarie Sakilla was announced as the winner on Wednesday at an official award ceremony in where President Ellen Johnson Sirleaf and scores of government officials were in attendance.

The 2016 Integrity Idol is the second iteration of a nationwide campaign by Accountability Lab Liberia in partnership with the Open Society Initiative of West Africa, UNDP, the Swedish Embassy in Monrovia, and the European Union. The program recognizes and celebrates the most honest government officials in Liberia.

Lawrence Yealue, the coordinator for Accountability Lab Liberia, said the selection of the winner was a vigorous process, involving over 2,000 nominations of the civil servants at the stage of sorting and vetting by experts familiar with anti-corruption campaigning. He said the final stage of the campaign involving five finalists, required a voting process that was opened to the public online and through short code messages.

He praised the civil servants who were part of what he called a competitive process. “These people are always there day and night, rain and shine – giving their lives to their nation, and that’s what we all should do – and that’s what Integrity Idol stands for,” he said.

This year, the five finalists came from four ministries: Health, Agriculture, Education, and Post and Telecommunications.

Among the finalists were Sandra Roberts, a human resource director; John Madave, an agriculture technician in Grand Cape Mount; Musa Dorley, a community leader in Bomi; and Patrick Goffah, a janitor at the Ministry of Education.

Presenting the awards, Sirleaf thanked the organizers for promoting integrity and praised the finalists for demonstrating high levels of integrity and honesty at their places of assignments.

“There are many more of them in all the organizations and entities, except they have not been recognized….and that’s what this lab does,” the president said. “This lab recognizes them and bring them to our knowledge- to our consciousness, and we can now do something to recognize them too.”

Sirleaf was particularly impressed by the work of agricultural technician John Madave, who worked with farmers to optimize their production.

“For those farmers who are changing the lives of those women in the villages – making an example for them – I hope we have the opportunity to show some of these [videos] on the local televisions so it can be shared by others to be an inspiration and encourage more,” she added.

She promised to reach out to the finalists at their places of work.

He says he is driven by the belief that the safety of his people come first.

Proud to emerge as the winner of this year’s competition, Sakilla said he was glad because pharmacists can now get public recognition and attention.

“Most times the works of pharmacists are not recognized,” he said.