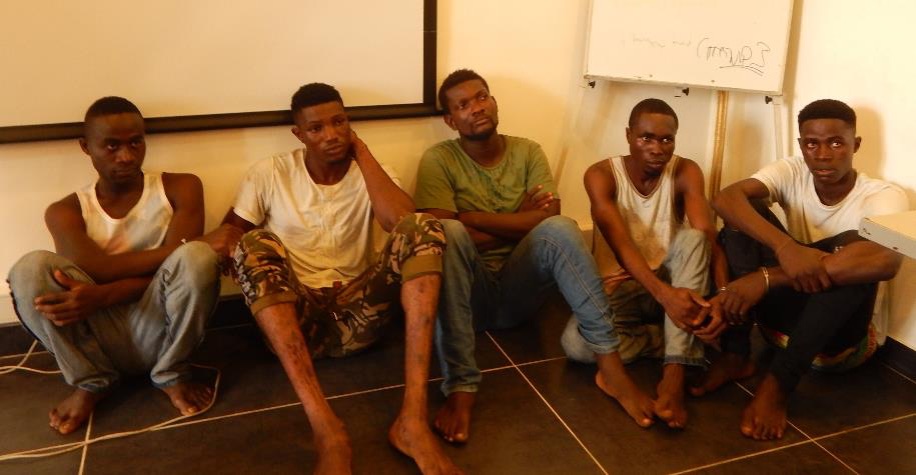 MONROVIA, Montserrado â€“ The Liberia National Police has announced the arrest of several suspected armed robbers and hardcore criminals as part of its operations to make communities peaceful and habitable for residents.

Addressing journalists at the police headquarters on Tuesday, police spokesman Moses Carter admitted to a sharp increase in the waves of armed robbery.

Carter said while there was no specific reason for the increase, the police was working to apprehend individuals who were committing serious crimes.Â  He said officers are working hard to ensure that people sleep safe and sound.

Those arrested and currently in police custody include Kortee Weegie also known as â€˜AFL Brabee,â€™ a notorious armed robber in Paynesville who has allegedly carried out series of robberies in Duport Road, Coca Cola, and Omega communities.

According to Carter, Weegie was arrested on Saturday, April 12, at 11:35 p.m. in the Coca Cola Factory community and would shortly be charged and forwarded to court for prosecution.

The three suspects, according to the police spokesman, are linked to several armed robberies in the Monrovia region, including an April 10 armed robbery at Capital Bypass where the suspects made away with cash and several valuable properties; the robbery of the 9th Street Sinkor Aminata gas station that led to the loss of cash and properties; and a robbery at Godâ€™s Willing Gas Station in Careysburg, which resulted in L$6,000 [US$45.32] stolen and two persons injured with severe bullet wounds.

Carter said Cooper and Sherman were also involved in the armed robbery of Lonestar MTNâ€™s Gbarnga office on April 28. â€œWe have also arrested an alleged armed robber only identified as â€˜Makar,â€™ who went to arm rob a lady around the residence of the late President Moses Blahâ€™s residence, demanding L$3,000 (US$22.73) from the lady or else he would harm her. He is currently in our custody undergoing investigation,â€ Carter further said.

He said among those arrested are also two Sierra Leoneans who were found with fake Liberian dollars worth L$2.5 million (US$18,882), along with the machine used to produce the counterfeit bills.

The police spokesman also told journalists that Jeff Roman, a resident of Duport road who is notoriously known for vehicle theft, had also been arrested and was awaiting to be charged and sent to court. He said Roman was arrested on Sunday, May 13.

He said police investigation established that the suspect usually drugs commercial drivers with juice believed to be contaminated with a chemical before criminally taking their vehicles.

â€œWhile theyâ€™re unconscious, he takes such a time to criminally make away with their respective vehicles,â€ he said.

The police spokesman also disclosed that Abraham Konneh, a resident of Jacob Town who is believed to be a notorious suspected sponsor of auto thefts in Liberia, is also currently in police custody. â€œDuring investigation of suspect Jeff Roman and Abraham Konneh, alias VIP, four vehicles were retrieved by the LNP,â€ he noted. Among the vehicles retrieved were a yellow Nissan Almera sedan, a yellow Toyota sedan, a white Toyota Corolla station wagon, and a maroon Saturn sedan.

He said ownership of three of the vehicles have been established, although one is yet to be identified.

â€œWe are asking members of the public to visit our headquarters to ensure that they can view this unidentified maroon Saturn sedan to determine ownership,â€ he added.

At the same time, the police spokesman told reporters that an ambulance belonging to a health center in Grand Cape Mountâ€™s Porkpa District was retrieved at the Yeala Motel in Paynesville from another suspect identified as Amadu Massaquoi.

He also disclosed the arrest of 18 individuals who allegedly set ablaze a truck that was involved in a motor road accident, which led to the death of a pedestrian.

These arrests, according to the police spokesman, are achievements made by the police over the past weeks to ensure that citizens can feel safe.

A resident of Paynesville has praised the efforts of the police and encouraged the anti-robbery response team to increase its night patrols.

Allison Geeleh told The Bush Chicken on Tuesday that an increase in the number of night time patrol by police would help increase surveillance.

â€œWe are living in fear because of the growing number of criminals, especially at night,â€ Geeleh said.