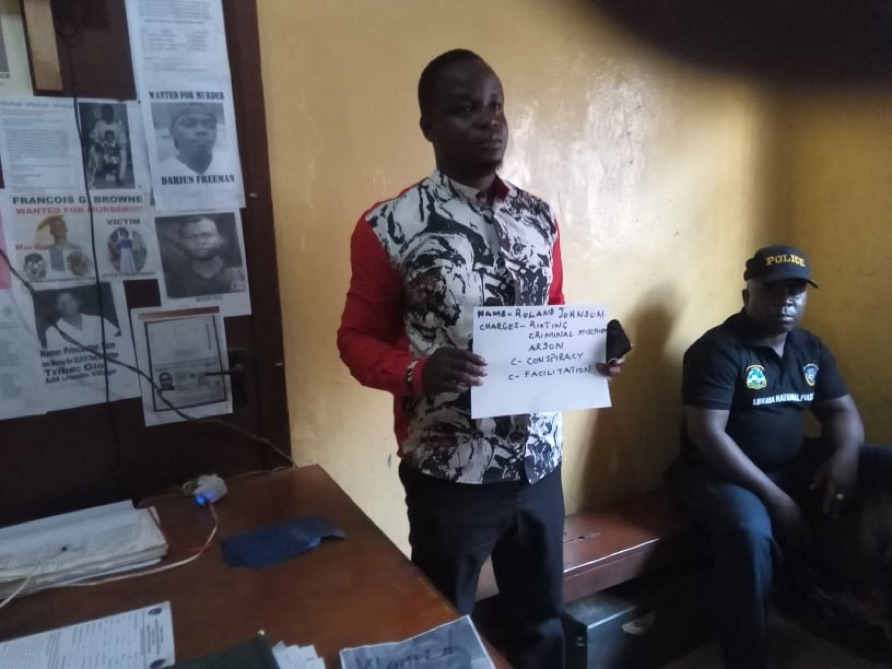 The commissioner turned himself in at Margibiâ€™s Superintendent Jerry Varnieâ€™s office after the Police issued a red alert for him.

Johnson has been detained at the Margibi Police detachment headquarters in Kakata and charged with multiple criminal offenses, including rioting, criminal mischief, arson, criminal conspiracy, and criminal facilitation.

Police investigators consider Johnson a key suspect in the riot that resulted in two burnt police stations, in addition to the destruction of a magisterial court and several other private and public properties. He is suspected of having met with rioters during the early hours of Monday morning before the protest went violent.

A police source who spoke anonymously because they were not authorized to provide information said Johnson had led the rioters to present their plight to Rep. Clarence Gahr of Margibiâ€™s fifth district, minutes before the protest went violent.

During that meeting, the source said protestors refused to listen to the lawmaker and shouted and chanted over his voice.

Johnson has denied any wrongdoing in the April 1 rioting. He noted that he was present on the scene because he was intervening and pleading with his citizens for calm, shortly before the riot sparked off.

â€œI was trying to ensure that the rioters talked to the district representative, Honorable Clarence Gahr, so as to avert their action and resolve to find an amicable resolution to the death of Moses Wolopay, a motorcyclist, who went missing on the first of last month, March, 2019 and was found with his body parts missing,â€ Johnson stated.

He further added that he did not take part in the rioting the began afterward.

Meanwhile, Superintendent Varnie confirmed to The Bush Chicken that while police alerted him that they wanted to speak with the commissioner, Varnie is unaware about any criminal charges against Johnson.

Varnie also held a press conference on Tuesday condemning the violence and promised to ensure that the perpetrators would face justice.

â€œOur citizens should understand that this country is a country of law and not man. No one should take the law in their own hands â€“ [not] even me as a superintendent,â€ he said.

â€œThose violators will be brought to justice and justice will take its course.â€

Police spokesman Moses Carter has confirmed that 88 persons (61 males and 27 females) are undergoing interrogation at the Liberia National Police headquarters in Monrovia. He added that more suspects are expected to be brought from Margibi.