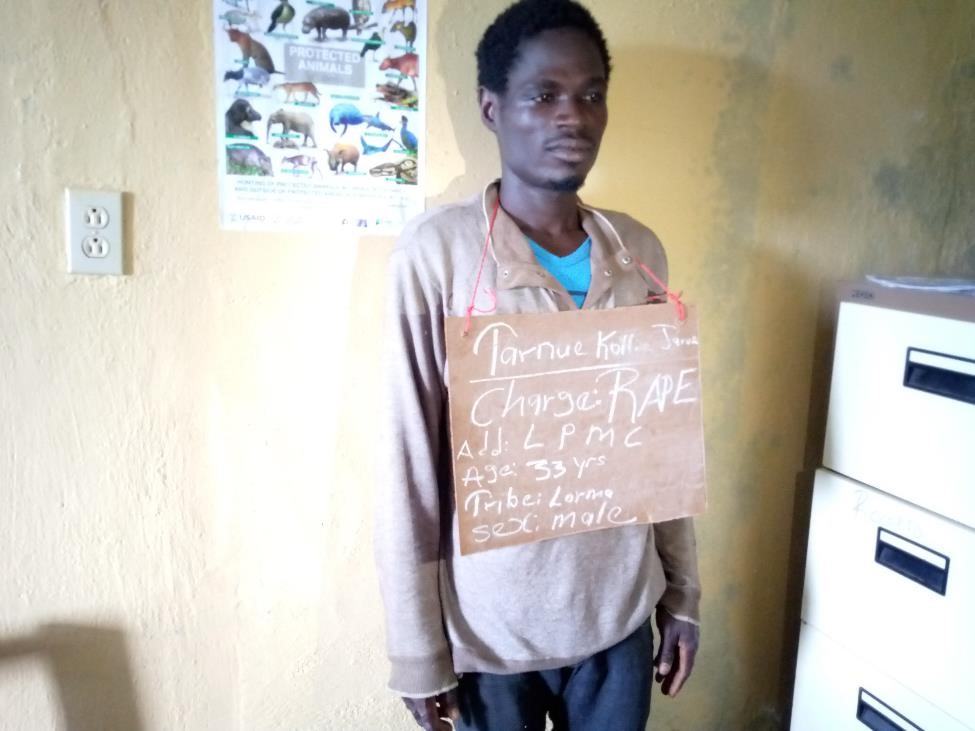 VOINJAMA, Lofa – A 33-year-old man has been charged with raping a 14-year-old girl in Yandisu community, Voinjama District.

Tarnuekollie Jarvah was arrested on May 7 after the victim’s mother filed a complaint with police on May 5 that her in-law had raped her daughter, a third-grader attending the Yandisu Public School. Yandisu community is located on the Voinjama-Foya Highway and commonly called LPMC Community.

Jarvah is married to the victim’s aunt, who alerted the mother that she suspected her husband was sexually abusing the teenager.

The victim’s mother told police her daughter had reported feeling ill to her aunt: “Later, my daughter pointed out how he forcefully had sexual intercourse with her often, whenever [her aunty] was outdoor. And as such, my sister acted quickly upon the girl’s statement by taking her to a nearby clinic and also asked her husband whether the girl’s statement was true against him.”

The victim’s mother continued, “It was immediately established from the medical report that the 14-year-old was raped and that is why we came to seek justice.”

During the police investigation, the victim confirmed that Jarvah had indeed raped her over three separate occasions.

“Because I normally sleep on the floor in the unoperated shop that must be crossed before entering his room, he always had me, most especially when his wife [was] not around,” the police indictment quoted the victim.

“I was very afraid to speak out, until at this point when I can no longer bear the pains.”

When questioned by police, Jarvah did not outright deny the crime. “What else can I say, when the incident has already happened in my house, and even if I deny, the trouble remains on my head,” he said.

The deputy commander at the Women and Children Protection Section for the police in Lofa, Richard Armah Mulbah, said after a thorough medical screening of the victim, Jarvah has been charged with rape and sent to court for trial.

“From [the] investigation conducted, the perpetrator is found liable for the crime committed, and he must face trial at the Tenth Judicial Circuit Court,” Sergeant Mulbah said.

Meanwhile, a social worker and women’s advocate near Voinjama, Beatrice Karneh, says the government needs to do more to provide financial and logistical support to the Ministry of Gender to ensure that survivors are properly cared for as they pursue justice.

She feared that this case and others could be compromised in the future: “In Lofa County, there continues to be an alarming increase in rape cases, all because family members support compromising decisions, and this must stop so that survivors’ lives cannot always be in danger.”

Karneh also worried that some rape victims were refusing to report their cases to the police in the first place, and this was endangering their lives.

“Let [the] government support the enforcement of rape penalties, so that perpetrators will not go with impunity,” Karneh added.