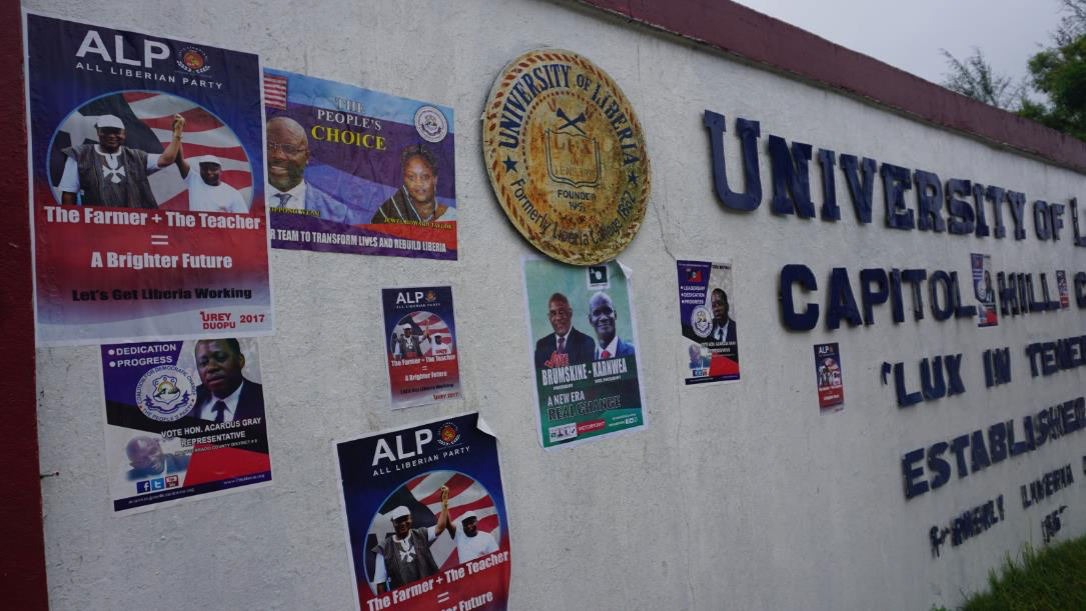 According to Mvogo, such acts are in violation of the city ordinance and that the city will be taking actions â€œto bring violators to book.â€

â€œViolators caught for the first time will be warned and fined US$500 and if the act is repeated, the fine is US$1,000,â€ she said. Several campaign posters line a monument at the intersection of Broad and Randall Streets in Central Monrovia. Photo: Zeze Ballah

Mvogo noted that a more appropriate means of advertising would be for political parties to take advantage of the numerous billboards across the city. She said the city charges US$200-300 to advertise on those billboards.

Meanwhile, Sen. Stephen Zargo of Lofa has said he wants the law on defacing public facilities relaxed during this campaign period.

The law he was referring to in the penal code classifies desecration of any public monument or structure, place of worship, or burial as a first-degree misdemeanor.

The law defines desecrate as defacing, damaging, polluting or otherwise physically mistreating in a way that the actor knows will outrage the sensibilities of persons likely to observe or discover his action.

â€œIt is time to relax some of the laws that will increase the participation of all parties including those that do not have the adequate resources to campaign,â€ Zargo said.

He said the city should take record of all the political parties that are in violation and make a representation to the respective standard bearers, adding that â€œcountries relax law at times because of heightened security situation, which is not a strange phenomenon in Liberia.â€

He stressed that maintaining the current peace now is paramount to all Liberians than regulations. Dan Sayee, the vice chairman of the Movement for Economic Empowerment, has said enforcement of the rules will impose extra financial burdens on candidates.

Following the start of campaign activities on July 31, campaign flyers have been posted on several public facilities including the University of Liberia, the Temple of Justice, the Capitol Building, the G.W. Gibson School, and many others. On Tuesday and Wednesday, several individuals were seen under the rain removing campaign posters from public facilities.