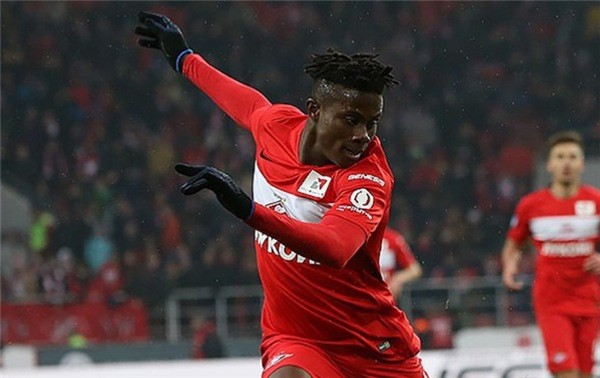 Five years after Liberians last saw one of their own play in the UEFA Champions League, Sylvanus Nimely may get to play in the 2017-18 competition as part of Spartak Moscowâ€™s squad.

The 19-year-old forward only joined the Russian Premier League champions during the middle of last season where he made a significant impact on the junior team, playing in the Russian first division league.

After a successful time with Spartak Moscow II, Nimely was included on Spartakâ€™s first team for their preseason camp in Poland. He made use of the opportunity by impressing the technical staff and was included in the squad for the 2017-18 Russian Premier league.

Since his inclusion, heâ€™s yet to make his Russian Premier League debut with eight games already played. Heâ€™s mostly featured in the junior team that plays in the Russian first division.

Despite not having the opportunity to debut on Spartakâ€™s first team, his work with the junior team continued to impress his coaching staffs as he was also included in the 29-man squad for the UEFA Champions League.

Spartak released its final squad for the European competition on Monday, September 4 with Nimely being named on the list of forwards that includes former Shaktar Doneskt and AC Milan striker, Luis Adriano of Brazil.

With Nimely yet to make a single appearance in the ongoing Russian Premier League, his chances at a Champions League appearance are slim, but heâ€™s confident of breaking through. In an interview with The Bush Chicken, Nimely said he was grateful for the opportunity and is ready to work to make his dream come true.

â€œIâ€™m grateful to God for the opportunity to be part of the Spartak Moscowâ€™s squad,â€ he said. â€œIt is truly an honor, and Iâ€™m happy for it. Itâ€™s a huge challenge for me and Iâ€™m looking forward to it.â€

The world biggest club competition will begin on Tuesday, September 12 when top clubs from around Europe will begin to battle each other for the club supremacy of Europe.

The competition, which will be contested by champion clubs and other top clubs in Europe, will bring together players from the different parts of the world playing for their respective clubs.

Since the era of the famous George Weah Eleven where Liberians frequently watched their countrymen play in the Champions League, the tournament did not see a Liberian until Sekou Jabateh Oliseh made an appearance.

Liberians watched Oliseh play in the competition on Russian club CSKA Moscowâ€™s roster for the 2009-10 and 2011-12 football seasons. However, Oliseh was soon out of CSKA Moscowâ€™s first team by spending most of his time on loan.

Since then, the competition has been playing without a Liberian participating, although the likes of Theo Weeks and William Jebor had participated in Europeâ€™s second club competition, the Europa League, but Liberians had always been eager to see their compatriots at the top level.