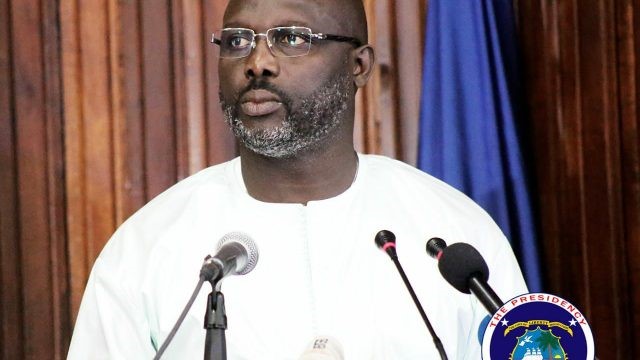 MONROVIA, Montserrado â€“ President George WeahÂ has submitted his plans for the state of emergency to the legislature, with provisions for food distribution, subsidies of utility bills, and other relief measures.

In a communication to the legislature on Tuesday, April 14, the president said the state of emergency had imposed unnecessary economic costs on Liberians and the broader economy in order to achieve public health and public safety objectives. He noted that the costs for the public to adhere to these health protocols may well undermine the public health and public safety aims of the state of emergency if the costs are not addressed.

To mitigate the effects of the state of emergency, the president proposed that the legislatureÂ re-appropriate US$25 million of the remainder of the 2019/2020 budget to support food distribution in designatedÂ affected counties for the period of 60 days.

â€œThe full cost to cover thisÂ  period in affected and other areas may add up to around US$40 millon. The World Bank has agreed to finance this gap off budget in the tone of US$10 millon using resource re-allocation from existing projects,â€ the president noted.

â€œWith this, president pro temp, we have a full package of food support to our people pending consideration and approval of this proposal.â€

Pres. Weah said prior to his declaration of the state of emergency, the government had engaged relevant partners to address the situation, â€œknowing it would be difficultÂ  to achieve any announced stay-at-home order without a concomitant support for the livelihood of Liberians remaining at home in affected areas.â€

Pres. Weah added that theÂ government intends to have the World Food Programme implement the food distribution program in collaboration with the government. He announced that a national steering committee, comprising of relevant government agencies and international partners, would be formed to handle the food distribution program. That committee is expected to have an oversight role to prescribe rules and address challenges while the WFP will implement the program.

The president also announced that the government had paid the Liberia Electricity Corporation US$4 million to settle past arrears.Â  â€œThis is one of the largest single payments on a government electric bill in years,â€ Pres. Weah wrote.

The president requested to the legislature that the government take up the electricity and water bills of households in the counties affected by the stay home order for the duration of the order. However, he did not say how much these bills would cost.

Pres. Weah also proposed in his communication that the government should pay the loans owed by market women and petty or small traders in affected counties while setting aside US$15 million in the nextÂ budget year to pay suppliers and vendors that have not been paid over several years by the government.

He also asked that the government suspend all additional charges on imported goods that areÂ manufactured in Liberia in addition to the suspension of pre-shipment inspection until otherwise notified.

â€œI have provided both facts and circumstances surrounding the declared State of Emergency and programs that address social and economic issues arising from that declaration,â€ the presidentâ€™s letter concluded.