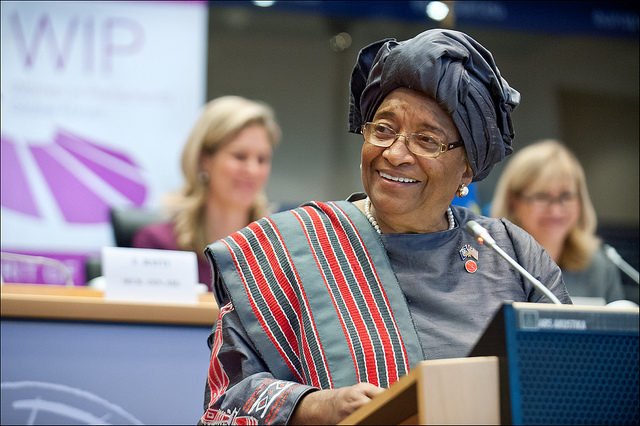 President Ellen Johnson Sirleaf has addressed the General Assembly of the United Nations for the last time as a Head of State, ahead of her transition of power to a new elected government in January next year.

â€œIndeed, democracy is on the march in Liberia, and I believe, on an irreversible path forward on the African continent,â€ she said.

She thanked development partners who continue to contribute to the country, including the ongoing electoral exercises, to ensure that the process remains peaceful and credible.

The Liberian leaders said her administration has successfully laid the foundation for the next democratic regime, following what she termed as 25 years of development reversal that was compounded by a 15-year civil war prior to her coming to the presidency.

Sirleaf told world leaders that the October elections would mark a historic transition of democratic power that would pave the way for the next generation of citizens to lead the country.

This statement, however, has sparked debates among political pundits. Some say the presidentâ€™s mention of the phrase â€˜next generationâ€™ in definition meant that she prefers a new group of political actors to lead the country, while others believe the president was referring to giving leadership to young people.

The debate has reawakened debates on who the Liberian leader actually prefers to succeed her as president.

Although the Executive Mansion recently reaffirmed her support for her Vice President, Joseph Boakai, there are claims that the presidentâ€™s support for Boakai, who succeeded her as the Unity Partyâ€™s Standard Bearer and Presidential Candidate, has not been demonstrated.

The claims were even more grounded when Sirleaf announced she would not attend her partyâ€™s national campaign launch in Monrovia due to a groundbreaking ceremony she claimed she had earlier committed to in her home county, Bomi.

With just days ahead of the presidential and representative elections, Sirleaf acknowledged to the group of world leaders that she was addressing them as president of Liberia, after completing her two-term constitutional limit after being elected in 2005 as the first woman to be democratically elected president of an African nation.

â€œToday, I address you for the last time as I bring to closure my two terms of elected office,â€ she said.

She said the transition will mark the first time in 73 years that political power will be handed over peacefully and democratically, from one elected leader to another. However, a recent article clarified that while such transition has not happened in recent years, peaceful and democratic transfer of power in Liberia has been the norm over the countryâ€™s 170 years of existence.

The president boasted of significant achievements under her presidency, including the rebuilding of infrastructure, the economy, security, and other public institutions.

â€œWe have reshaped the Armed Forces of Liberia and the Liberia National Police, professionalized our customs and immigration services and small Liberian Coast Guard. We are proud to report that since the formal turnover of the security responsibilities to the government, Liberia has remained stable, peaceful and secured,â€ she said.

â€œWe transformed the economy from a growth rate of less than zero to more than 8.7 percent in 2013, until the health crisis and plummeting commodity prices brought a downturn to our economic recovery. Liberia has adjusted; we are resilient, embracing diversification. Our focus today is towards strengthening the agriculture sector for value addition, and infrastructure development with emphasis on roads and energy for industrialization.â€

She at the same time acknowledged benefits of support Liberia has received through multilateral arrangements including through collaborations with the United Nations, the African Union, and the Economic Community of West African States.

She among other things, boasted that from a pariah state, Liberia has gradually regained the confidence of nations and even risen to assume leadership roles in regional bodies, specifically ECOWAS and the Mano River Union.

â€œI was personally privileged to play a role in the formulation of the Sustainable Development Agenda as co-chair of [former] Secretary-General Ban Ki-Moonâ€™s High-Level Panel on SDGs and in framing the Common Africa Position as Chair of the AUâ€™s High-Level Committee,â€ she added.

â€œWe are establishing trans-border development corridors to enhance regional trade and strengthening the rule of law to tackle systemic corruption. Liberia is experiencing the birth of a post-conflict artistic community, in song, hip-hop, painting, poetry, storytelling, and fashion.â€

She also acknowledged the contributions of the UN in achieving the gains realized.

With commendations to the leadership of the world body, with further challenge to sustain the gains so far, Sirleaf encouraged world leaders to remember Liberia.

â€œConsider the lives saved, the wealth created, the stability assured because this global body led at a time of great uncertainty in our sub-region and around the world,â€ she said.

She encouraged fellow head of states to continue to lead, spreading the values of democracy, human rights, and good governance while strengthening solidarity for economic transformation and social resilience.

â€œIt is often in times of transition that great leaders emerge and institutions are strengthened,â€ Sirleaf stressed.