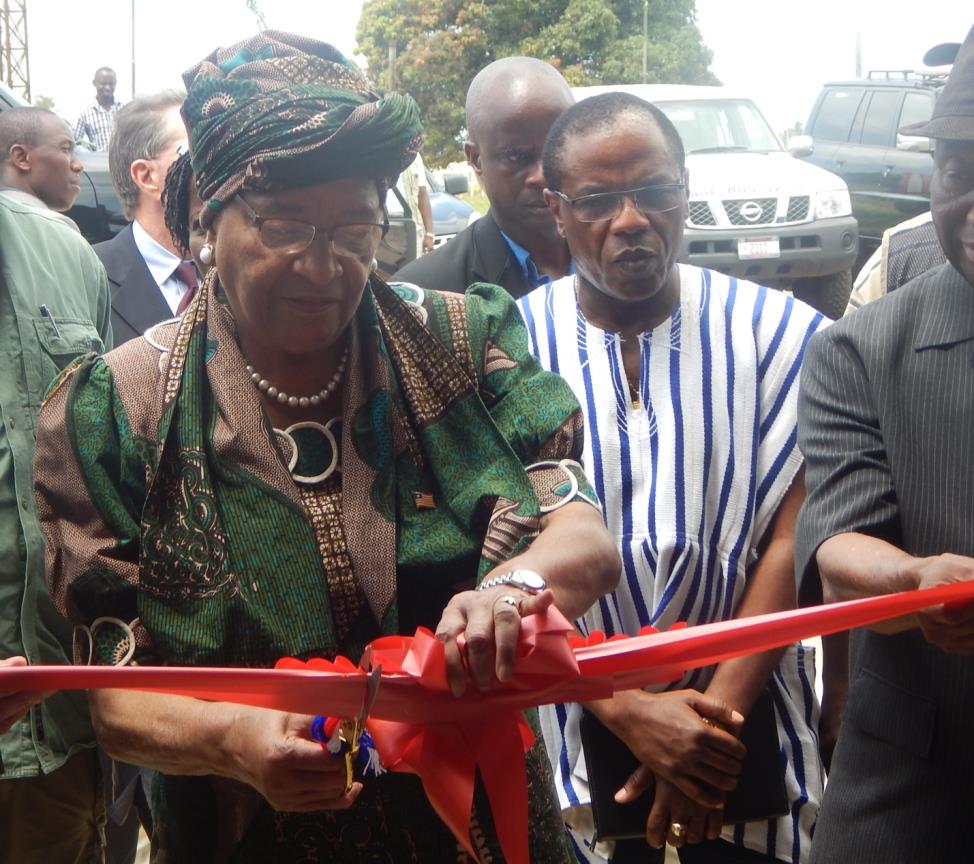 The dedication ceremony for the US$5 million facility took place on Saturday and was witnessed by Vice President Joseph Boakai and several international partners and government officials.

The 100-bedroom medical facility was constructed by a Liberian firm, CJ Construction Incorporated, with funding from Samaritanâ€™s Purse International Relief. It includes in- and out-patient wards, surgical and delivery wards, a dispensary, and offices.

Sirleaf praised Samaritanâ€™s Purse and its executive director, Franklin Graham, for the new medical facility and its support to the countryâ€™s health services and developmental needs. She said the organizationâ€™s continuous support to the country is a monumental example of a partnership of love and continuity.

She added that Samaritanâ€™s Purse, in addition to its activities in the country, has also constructed air strips all across the country.

At the same time, Sirleaf thanked CJ Construction Incorporated and its team of mostly young Liberians who acquired their skills from apprenticeship at the Monrovia Vocation Training Institute and other institutions providing vocation education in the country. The president also particularly commended the vice president for his influence and contribution to the success of the project.

Although it will not providing all the services, Sirleaf said the facility can be compared to any other in the region and the world over. â€œI havenâ€™t seen it yet, but I have heard a lot about it, and we all going to now see it,â€ she said. â€œItâ€™s a monument of a long-term friendship, most importantly as you said Dr. Graham; itâ€™s a monument of Godâ€™s love for Liberia.

She added that the love of God for the country has been demonstrated in several ways that have enabled the government to once again be subjective to humanity and rise up again to be able to pursue the goals we have set for the peace and prosperity of our people. â€œThis symbol gives us hope; it gives us strength and it gives us determinationâ€.

Graham said the dedication of the new facility was being done by Godâ€™s glory. He said as Christian charity organization, Samaritanâ€™s Purse is involved with medicine because it follows the example of Jesus Christ. â€œHe cared for those that were sick. For those that were hungry, he cared,â€ he said. â€œWe want the hospital to be a testimony for people to put their faith and trust in the living God and his son and lord, Jesus Christ because if we place our trust and faith in him, we donâ€™t have to worry about what storm comes in life,â€ he added.

Samaritanâ€™s Purseâ€™s Liberia Country Director, Kendell Kauffeldt, said not only had the Liberia Revenue Authority granted duty-free status to allow the projectâ€™s construction materials to enter the country, but the Ministries of Health and Public Works also participated in the success of the construction.

He praised the government for its backing so far, but asked that it will continue its support by providing the necessary budget subsidies and called on the public to support to the sustenance of the center. He extended a special gratitude to Graham for his vision, love, and concern for Liberia. â€œWhen Franklin in 2011 made the decision to build the hospital to ELWA, he gave us all three mandates, and I have reminded my team over the last four years of the mandate that Franklin gave to us,â€ he said. Inside the pediatric ward of the new ELWA Hospital facility. Photo: Gbatemah Senah

Bruce Johnson, the president of SIM USA, ELWA’s parent organization, announced that his organization has recently awarded the first ELWA medical scholarship to eight Liberians. He said the scholarship was made possible through the Thomas Eric Duncan Medical Aid Scholarship Fund. The eight ELWA staffs are the first batch and currently the only beneficiaries of the fund.

The scholarship is named in honor of the Liberian who became the first Ebola patient diagnosed on American soil. Duncan died in Dallas, Texas. Meanwhile, the medical director of ELWA, Dr. Jerry Brown, has described the dedication of the facility as a mark of a history for ELWA and the people of Liberia.

Brown said for too long, people have lost loved ones to curable diseases and amenable conditions. â€œWe tried at many times using the available resources we had, yet we lost many of them in battles to death,â€ he said. â€œToday as this facility is being dedicated, let us begin to look beyond what we are beholding and be courageous to provide a better and resilience health system for our people.â€

He said with the new state of the art facility, some of the curable diseases and conditions that had overwhelmed the hospital in the past would now be more effectively handled. The audience at the dedication program. Photo: Gbatemah Senah

â€œWe look forward to having better diagnosis capabilities and conditions that we could not diagnose of which people died but that we could handle will now be diagnosed,â€ he said. â€œAs we speak, we are soon to begin to install our first endoscopic panel to be able to do a lot of investigations, something we never had at [the old] ELWA Hospital.â€

He said the ELWA Hospital now has a surgeon and doctors with other specialties, while more are expected shortly.

But Brown stressed that the country must continue to remind itself of the many challenges the sector still faces.

He said low salaries for healthcare workers, especially those dealing with clinical care, remains a serious challenge for the country. â€œNo wonder most of our younger doctors nowadays are looking to doing law or wanting to do public health, leaving clinical medicine because of the low salary grade,â€ he said.

Another major challenge affecting the health sector is the continuous referral of patients to foreign countries for simple medical procedures because the services are not available within the country. He said he foresees a future with a better salary structure for health workers and a time when other countries will refer patients to Liberia.

He said while the ratio of doctors to patients remains untenable, there is still a hope for a major improvement as indicated by the dedication of the new facility.