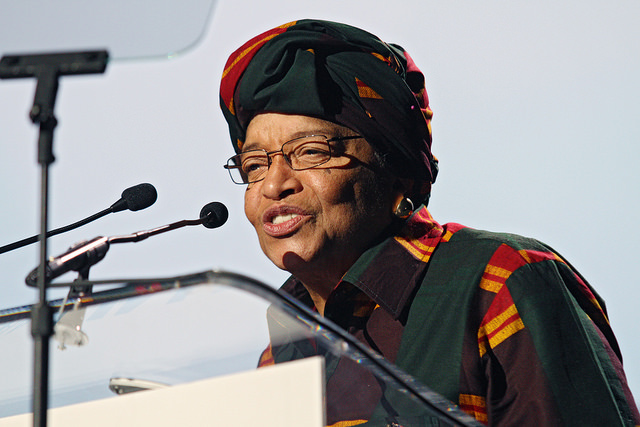 MONROVIA, Montserrado â€“ Although she will not be a candidate, President Ellen Johnson Sirleaf has promised to campaign for female politicians contesting in the October presidential and legislative elections.

Sirleaf said her desire was in reciprocation of the efforts of Liberian women who stood for her in 2005 and 2011 in the rain and the sun, campaigning for her victory.

She made the comments Tuesday at the Capitol Building during the launch of the Womenâ€™s Policy Platform. The platform is intended to close the disparity between female-to-male representation in elective positions in government.

She told female politicians that the ongoing campaign would be about closing the gap between males and females in the legislature. This, according to her, would ensure that more women are elected before her tenure expires in January next year.

â€œWe have to go into the various communities, from house-to-house, from door-to-door, examining their backgrounds, what they have been doing in their respective communities that we can rely on to sell to the voters,â€ she said.

According to an Executive Mansion release, the Liberian leader, who became the first female head of state to be democratically elected in Africa, disclosed that by ensuring more women are elected in the legislature while she retires, women can fend for themselves in the next government.

The new elections law provides that political parties, coalitions submitting its candidates for an election should endeavor to ensure that the governing body and its list of candidates have no less than 30 percent of its members from each gender. However, no political party â€“ including Sirleafâ€™s Unity Party â€“ has so far met the gender requirement and the NEC has said it will not penalize the parties.

Out of a total of 1,026 individuals qualified as candidates, 163 are females, constituting 15.9 percent.

According to the final list of candidates released by the National Elections Commission on Monday, Macdella Cooper of the Liberia Restoration Party is the only female among 20 candidates contesting for the presidency in October.

At the same time, only the Coalition for Democratic Change, the Movement for Democracy and Reconstruction, the Liberia Transformation Party, and independent candidate Aloysius William Kpadeh have females as their running mates.

The most surprising result for Liberia in the 2016 iteration of the Ibrahim Index of African Governance was that Gender was the only subcategory in which Liberia decreased in performance over the past decade.

Human rights lawyer and former solicitor general, Tiawon Gongloe, had earlier blamed Liberian women and President Ellen Johnson Sirleaf for the continual underrepresentation of women in government, saying that the president could have substantially increased female participation in government if she wanted to.

In 2005, Liberia elected the first female African head of state, but gender disparity in government persists. Although with a female president, there are currently only three females and 16 males occupying cabinet positions in the executive. Among 103 legislators, women also only occupy three seats in the Senate and nine seats in the House of Representatives. The gender disparity is seen at all levels of governance.

An affirmative action bill seeking to create five additional seats for women in the Legislature still lingers in the corridors of the first branch of government, despite a push by some interest groups.