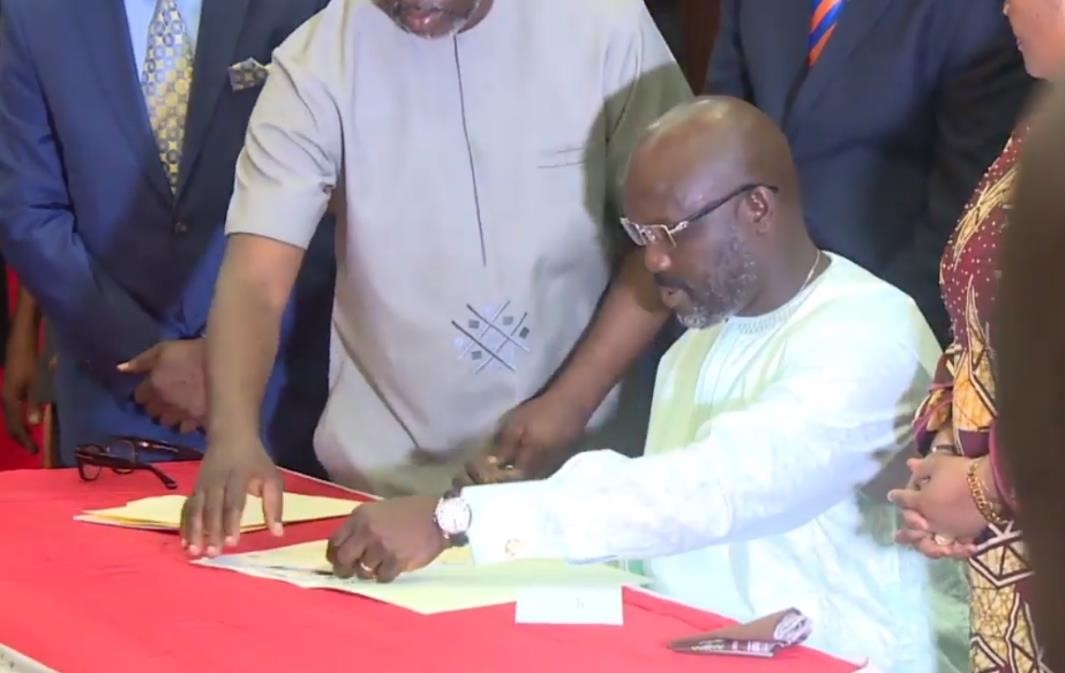 The two agreements are intended to facilitate the construction of paved roads to connect southeastern counties and paved roads and bridges in Monrovia and other major corridors of the countryâ€™s interior.

The agreements were passed into law by the 54th National Legislature following approvals by members of both the Senate and the House of Representatives.

Speaking at the signing ceremony on Thursday, Weah said the approval of the two agreements would enable his administration to immediately embark on infrastructural developments that are intended to directly improve the lives of Liberians.

He reaffirmed his commitment to connecting all county capitals with paved all-weather roads by the end of his term in office.

â€œThis is a promise that I have made to the Liberian people, and it is a pledge that I intend to keep,â€ he said.

The president said the new road network would make a significant impact on the countryâ€™s economy. He said besides enhancing economic growth and development, the initiative would also bring about other important socialÂ and economic benefits by providing citizens with easy access to health, education, employment, agriculture and other opportunities that will enhance their wellbeing.

He said other tangible benefits that the road connectivity will bring to the country include a more socially cohesive and united populace where citizens can travel and mix with each other more easily. Through dialogue and interactions, he said this would enhance the prospects of peace, understanding, tolerance, and stability.

â€œThe construction of the roads is the centerpiece of our Pro-Poor Agenda, whose ultimate objective is to lift Liberians from poverty,â€ he noted. â€œThis shall be my focus; this shall be my legacy, and this shall be permanent and perpetual inheritance that we will leave behind when our time is over and for the benefit of generations yet unborn.â€

The president emphasized that roads make a crucial contribution to economic development and growth, bringing in important social benefits, and are of vital importance in making a nation grows and develops. According to him, providing access to employment, social, health, and education services further make roads network crucial in the fight against poverty.

He, meanwhile, asked for the patience, support, and understanding of Liberians as his administration takes necessary actions to rebuild the country. The president extended gratitude to the leadership and membership of the legislature for reasoning with him in making citizens happy.

Also speaking at the ceremony, Public Works Minister Mobutu Nyenpan termed the signing of the two agreements as an unprecedented milestone in the quest for socialÂ and economic growth in the country.

Nyenpan said despite several years as an independent nation, it is noteworthy that 94 percent of Liberiaâ€™s 11,000 km of roads have remained unpaved, thus endangering the livers of commuters and impeding the free movement of goods and services.

â€œThis situation has hampered the progress of growth and development and has stagnated the overall progress of our nation,â€ he said. â€œThe cry of the people over the years has been the cry for good roads. This cry was even amplified during the election period.â€

He said with the two loan agreements coming into force, they would enable the government to pave a total of approximately 830 km of primary roads, affecting every region of the country.

â€œThe EBOMAF financing agreement loan will enable us to pave the total of 303.7 km of roads. One of the projects is the signature project of the president of Liberia, and that is the road which leads from Somalia Drive through Kessely Boulevard to Sinkor in Monrovia with a modern bridge built. This is 16 km.â€

The public works minister further explained that the EBOMAF loan projects will also include 112 km of roads between Tappita and Zwedru, 10.2 km between Toeâ€™s Town to the Ivorian border, and 185.5 km between Zwedru and Greenville. He said all the projects would be completed in the first term of the current administration.

Representatives of the two financing institutions were also present at the signing ceremony and committed to fully implementing the agreements.