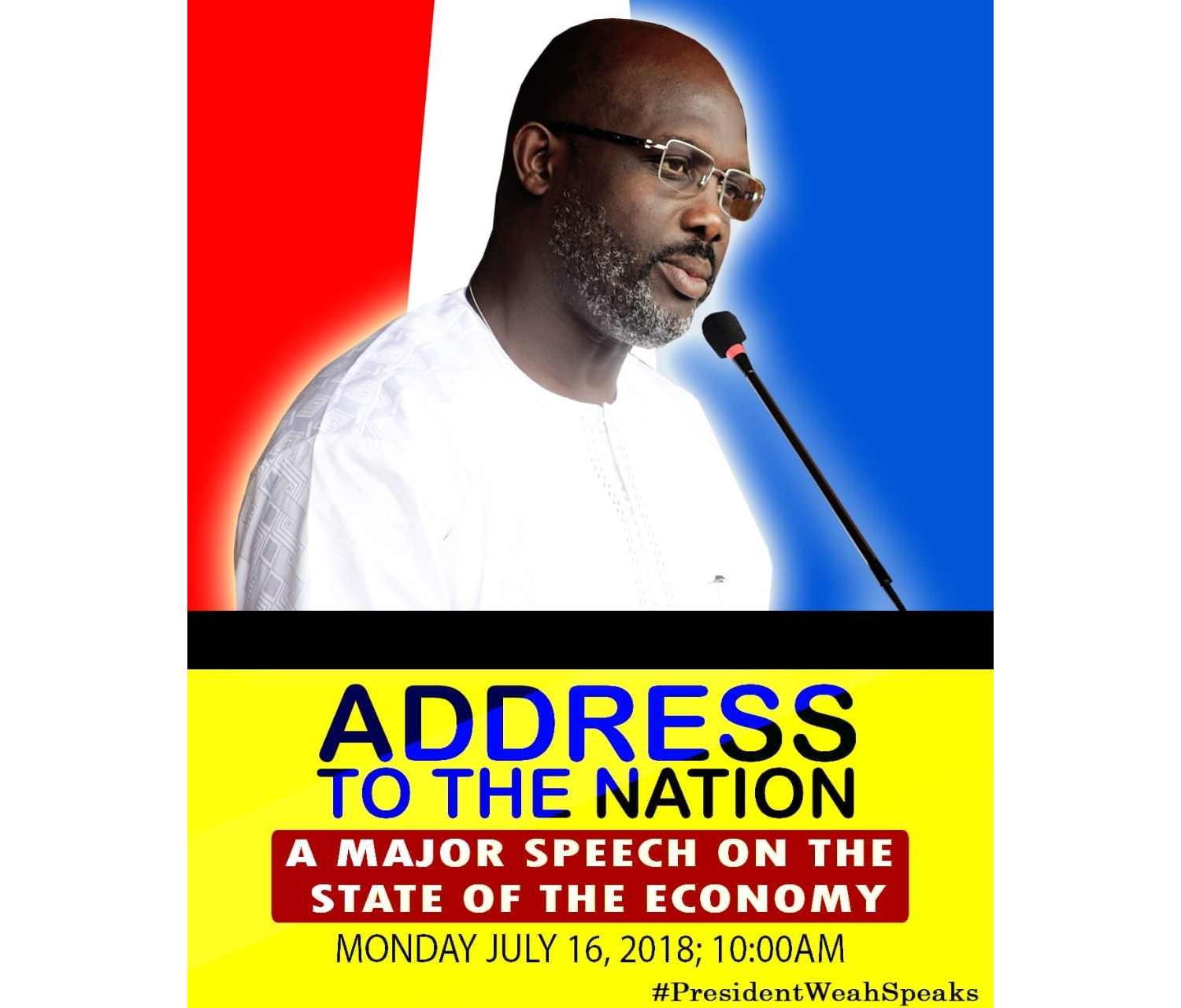 MONROVIA, Montserrado â€“ Amid an increasing exchange rate and a resulting high inflation, President George Weah will deliver a major address to the nation on Monday on measures his government plans to take to address the state of the economy.

Information Minister Eugene Nagbe disclosed on Saturday, July 14 on social media that the president’s speech would be broadcast on radio stations and other platforms at 10:00 a.m.

The Liberian economy has been free falling, as the currency exchange rate between the U.S. dollar and the Liberian dollar has reached its highest peak in history and continues to increase, making life difficult for poor citizens whose earnings are mainly in the local currency.

The cost of services and commodities have also similarly increased as the value of the Liberian dollar is increasingly reducing on the market. The Liberian leader, upon taking office in January, promised to narrow the gap between the rich and poor, but his address on Monday will mark the governmentâ€™s first official comment on the current situation.

At the end of May, the president had announced a reduction of tariffs on 2,000 imported goods, with the aim of lessening the impact of the worsening economic situation on poor people in the country. However, that action has not yet had the intended impact as prices on the market continue to rise.

Some members of the opposition, including Liberty Partyâ€™s deputy chairman for political affairs, Darius Dillon, have been calling for the president to address the nation on the state of the economy. University students under the banner of the Students Unification Party at the University of Liberia also recently led a protest calling for measures to stimulate a reduction of the currency exchange rate.

Although it is unclear what measures the president plans to announce, assistant information minister for technical services, David Kolleh, said the government might be contemplating printing new banknotes.

Kolleh wrote that although a decision to print the new banknotes has not been reached, the government wants to ensure that it is in full control of the rate as well as reduce the high inflation.

â€œThe new notes, if printed will not have bigger denomination like in the case of the current banknotes,â€ he said.

He said denominations like the L$500 note (US$3.12) down to the L$50 note (US$0.31) would be canceled as a form of curbing fraudsters and reducing black money activities.

There have been reports of counterfeit banknotes on the market. Recently, the Liberian National Police arrested a Nigerian national in Ganta with more than L$2 million in counterfeit banknotes. Police Inspector General Patrick Sudue said the prevalence of counterfeit bills were contributing factors to the rising exchange rate, although his statement was not validated by an economist.

The assistant information minister reiterated that the government inherited a broken economy with inflation at a â€œrecord high.â€

â€œUnemployment is high, while the prices of basic commodities remain a big challenge for poor families,â€ he noted.

He also added, â€œThe prices of some of Liberiaâ€™s key export have nosedived on the world market. Iron ore and rubber were the highest contributors to Liberiaâ€™s revenue envelope.â€

In early July, the president invited a new executive governor of the Central Bank of Liberia, Nathaniel Patray, after Milton Weeks who previously served in the position resigned.

Other government officials have suggested measures to improve the rapidly depreciating value of the Liberian dollar. Rep. Jeremiah Koung of Nimbaâ€™s first district has suggested printing new banknotes with stronger security features. He had also previously sponsored a bill to move to a single currency â€“ the Liberian dollar. Alternatively, the speaker of the House of Representatives, Bhofal Chambers, recommended that the country start using the U.S. dollar as legal tender as a permanent solution to the rising inflation and the unfavorable exchange rate.