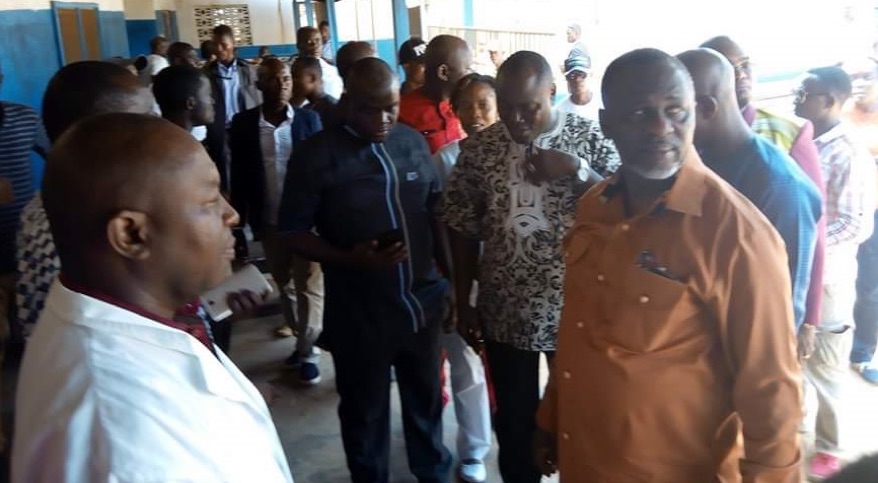 BUCHANAN, Grand Bassa â€“ A presidential team has visited the cash strapped Liberian Government Hospital and made donations that offered temporary relief to the hospital.

Nathaniel McGill, minister of state, toured the Liberian Government Hospital along with Bill Twehway, the managing director of the National Port Authority, on Wednesday at the request of President George Weah.

During the visitation of the presidential team, the hospitalâ€™s medical director, Abraham Jawara, reiterated challenges at the hospital, including a lack of fuel allotment and essential drugs to fully operate the hospital.

â€œSince we took over about three weeks ago, there have been lots of challenges ranging from allotment, fuel, and essential drugs â€“ so, we have been making an appeal to the general populace to see how best they can come in to help salvage the situation because, as it is now, the situation at this hospital is very serious to the point that our patients are buying their own drugs,â€ Jawara told the team.

Grand Bassaâ€™s county health officer, Dr. Anthony Tucker, said the hospital services residents from other nearby counties and needed to be at full strength. He drew attention to the fact that many of the staff at the hospital were volunteers and were not on the governmentâ€™s payroll.

â€œWe also have some NGOs here that have been helping them in terms of payment like [Jhpiego] and others,â€ Tucker said. â€œThey have left and majority of those staff have not been able to get pay since those NGOs left, but they are here and continue to work. The staff are all renting in the community unlike other hospitals that have nursing quarters. We donâ€™t have that here.â€

Tucker said most health facilities across the counties were facing similar problems as the Liberian Government Hospital, but those problems were more severe because of the strategic importance of the hospital. He noted that the hospital performs over 30 surgeries and over 100 deliveries each month.

After touring the hospital, the presidentâ€™s team provided US$50,000, two motorbikes, an ambulance, and 500 gallons of fuel. They also promised to rewire the hospital.

The US$50,000, two motorbikes, and the ambulance were donated by the National Port Authority, which operates the second largest port in Buchanan.

McGill, the minister of state, thanked the hospital staff for the sacrificial work amid the challenges and promised to improve the hospital through restoring electricity.

He assured the county that the team would report to the president for further intervention by the central government.