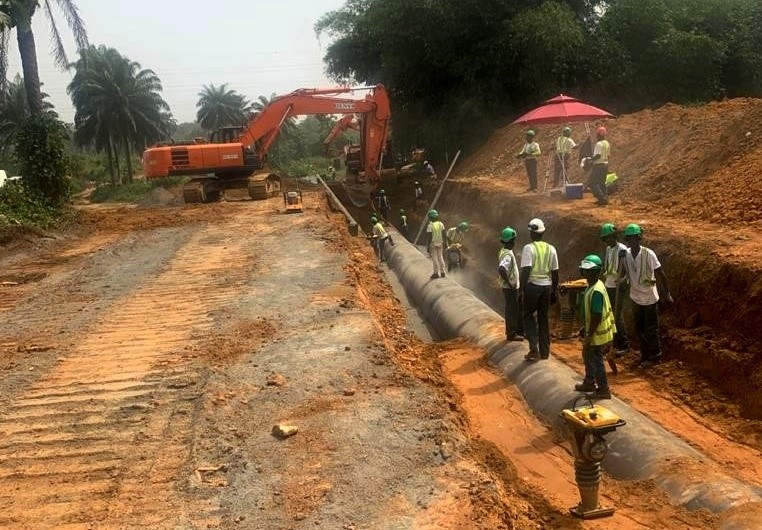 WHITE PLAINS, Montserrado â€“ The construction of the raw water pipeline for the Liberia Water and Sewer Corporation is more than 50 percent complete and on schedule to be completed in September 2020.

The US$18 million pipeline will draw water from the dam of the Mt. Coffee Hydropower Plant to the White Plains Water Treatment Plant. The project will save LWSC approximately US$780,000 a year in electricity costs as the water will be transported using gravity instead of pumping water into the treatment plant from the St. Paul River. The undertaking by the Millennium Challenge Account-Liberia will replace the original 36-inch diameter pipeline that was destroyed during Liberia’s civil war with a new 48-inch diameter pipeline.

According to Jurgen De Moor, project engineer for Belgium-based contractor Denys, all 820 pipes have now arrived on site after being shipped from the manufacturer in India. Denys has also cleared 98 percent of the route along the pipeline and the pipes have been strung along, awaiting the process of trenching, pipe laying, and backfilling, which has already begun in some areas.

Compensation of those affected by the project is nearing completion, with 54 of the 55 persons whose properties fall in the pipelineâ€™s right of way having been paid. Additionally, financial management training for individuals receiving compensation is ongoing and expected to end this month.

â€œThe exposed pipes are made of steel and have epoxy coating on the outside and inside, while the buried pipes are made of ductile iron and contain cement lining inside and bituminous coating outside,â€ he noted. â€œThe coatings will help protect bacteria from penetrating the pipes and contaminating the water while also preventing corrosion of the pipes.â€

The 5-km long pipeline project has already employed 114 persons, with 79 coming from the surrounding communities of White Plains and Harrisburg.

As part of the MCA-L mandate of promoting gender and social inclusion, 21 percent of the workers hired by Denys are women â€“ a much higher percentage than the industry standard of under 10 percent.

One of the women working on the project is Barbara A. Debah, a quality assurance officer at Denys who obtained her civil engineering degree from Stella Maris Polytechnic University.

â€œOne of my tasks is to make sure that the pipes are in good condition, specifically the lining and coating,â€ Debah said, noting that for the pipes to have a long lifespan, they should be free of cracks and rust before they are placed in the ground.

When completed, the pipeline is not only expected to save LWSC money; it will also improve the reliability and quality of water supply to Monrovia. The current location of LWSCâ€™s intake pipe results in poor water quality and salty water during the dry season when the St. Paul River level is low, as water from the Atlantic Ocean washes back into the river. Instead of retrieving water from downstream and closer to the ocean, the pipeline will draw water from the reservoir upstream.

Funded by the Millennium Challenge Corporation for the Liberian government, the raw water pipeline is part of the Energy project under the compact, which is committed to reducing poverty in Liberia by promoting economic growth and inclusion.