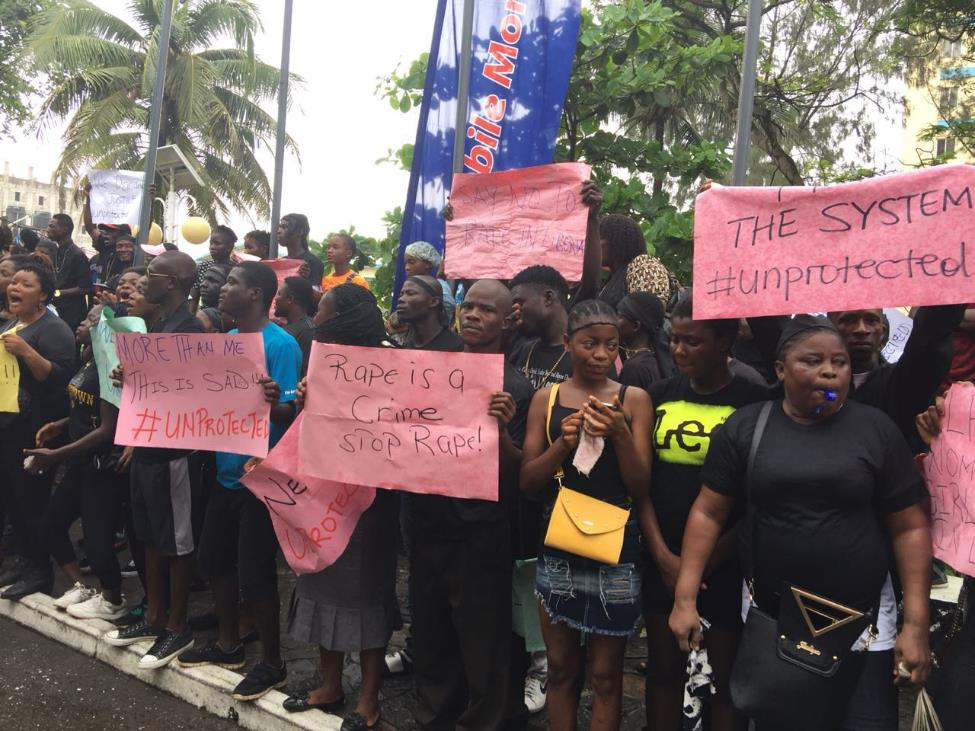 MONROVIA, Montserrado â€“ Protestors marched through the streets of Monrovia on Thursday to demand justice for the victims of rape and abuse at the More Than Me Academy. The protest was largely led by womenâ€™s groups including the Liberian Feminist Forum.

Beginning at 7:00 a.m. from Vamoma Junction, the protest proceeded to the Ministry of Education, the Ministry of Gender, Children, and Social Protection, the United Nations Headquarters and at the Monrovia City Hall, where the vice president and several female government officials were attending the International Sheroes conference.

Protestors said they were marching to demand that various measures be taken by the government and U.N. to address the More than Me Academy rape reports.

On October 11, 2018, the International Day of Girl Child, Propublica and Time Magazine jointly released a detailed article titled â€˜Unprotected,â€™ which exposed rape and sexual abuse of dozens of children under the care of More Than Me by the organizationâ€™s former program director, the late Macintosh Johnson.

The protestors went to various locations and read a petition. At one location, Caroline Bowah Brown read the petition on behalf of the group, requesting that the government revoke the accreditation of the More Than Me Academy and their management of 18 public schools under the Ministry of Educationâ€™s Liberia Education Advancement Program, formerly known as Partnership Schools for Liberia.

In reading the petition, Brown demanded that the government appoint a trustee to take over the organizationâ€™s private school on Ashmun Street, which is the center of the allegations.

â€œWe demand the establishment of an independent trustee of funds raised by MTM to cover school fees, uniforms, feeding, transportation stipend, and or medical costs for all the students at the institution through their graduation from high school,â€ she said. â€œThe fund should be administered by selected Liberian womenâ€™s organizations with oversight from the trustee.â€

Brown also called for an independent audit report of MTM financial activities in Liberia since 2013 in addition to counseling for the organizationâ€™s students.

â€œThey should institute healthcare and psychosocial counseling for all the students under the MTM Academy from its after-school program to the establishment of its inaugural school on Ashmun Street and up to present, fully covered by MTM,â€ she noted.

She called for an independent investigation to review the activities of the organization in Liberia since its inception. She said the government should demand key documentation from More Than Me as part of the investigation to learn what actions were taken by the institution and its board to curb further exposure of the girls to danger.

She also requested the release of the details of the 2016 selection process used to contract More Than Me to operate public schools.

Brown also called for the establishment of an oversight committee to ensure the rollout and the implementation of the Sexual Exploitation and Abuse Policy for non-governmental organizations and all public and private education institutions.

Moreover, she called for the resignation of the director of the Sexual and Gender-Based Violence Crime Unit at the Ministry of Justice, John A. A. Gabriel, and Tenneh Johnson, another staff of the unit.

â€œWe no longer have the confidence and trust that they will and can continue to enact their duties in a fair, objective and committed manner,â€ she said.

â€œWe, therefore, remind the government to use this as an opportunity to advance its commitment to Liberian women and girls and ensure that adequate laws and mechanism are in place to protect us from these horrifying and inhuman experiences. We reaffirm our position against the proposed amendment to the New Rape Law and call on the National Legislature to pass the Domestic Violence Bill. We remain prepared to hold the government accountable in the event that no action is taken to protect these girls and ensure access to justice and adequate care and support, we are also ready to lend our support to [the]Â government in [the] implementation of demands above,â€ she concluded.

Education Minister Ansu Sonii was one of those who accepted the petition and expressed regret about the incident and all other violence against women and girls in Liberia.

He maintained that his ministry would work with other agencies to make sure that the recommendations are worked on. UNDPâ€™s country director, Pa Lamin Beyai, accepted the petition on behalf of the United Nations and noted that his institution had zero tolerance for sexual exploitation and abuse.

â€œAs U.N. in Liberia and as stated by the secretary general, we plead that we will not tolerate anyone committing a crime and in particular crimes of sexual exploitation and abuse. It is totally unacceptable and we remain committed,â€ Beyai said.

â€œThe U.N. will resonate with other like-minded zero tolerance initiatives like yours. In this regard, we welcome this petition and we assure you that we will transmit this message to the highest authorities.â€

Gender Minister Williametta Piso Saydee-Tarr accepted on behalf of her ministry and noted the government had responded to the issue already and put together a joint team of several ministries.

â€œThank you all for this and assure that we will get back to you.â€

Vice President Jewel Howard-Taylor, who has been a supporter of More Than Meâ€™s work, received a petition at the Monrovia City Hall and noted that the president had indicated that he would ensure that the real story emerges.

â€œOur government has had several meetings and the same documents you are requesting we are trying to put them together. We will do an investigation and those who are caught will be punished,â€ she said.

â€œI want the women of Liberia to keep in mind that MTM is just the tip, but there are many issues in our homes â€“ in our families. And people who are raping are our brothers and our husbands. We need to find a way forward to deal with the issue and [the] government will do all they can. I will make sure this message reaches to the president and youâ€™ll hear from me very soon.â€

During the opening of the International Sheroes conference, President George M. Weah had noted that the matter was now under investigation by relevant authorities and urged Liberians to await the findings before drawing a conclusion.

The president said such a story of widespread abuse and rape was â€œindicative of an undeniable increase in the incidence of sexual violence in Liberia.â€

Meanwhile, another group, the Concerned Liberians Against Sexual Violence, is calling on the Ministry of Justice to confiscate all financial accounts belonging to Katie Meyler. The group, headed by Titus Pakpalah, has planned a protest for October 22 and has called on the public to assemble at the YMCA at 8:00 a.m. for a peaceful march.