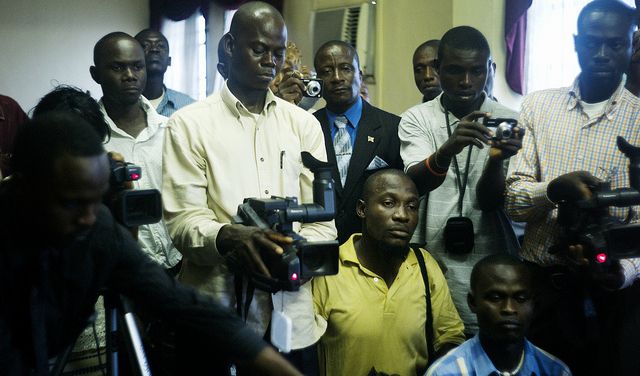 MONROVIA, Liberia â€“ The Press Union of Liberia (PUL) has suspended its vice president, Jallah Grayfield. This came after a probe into his participation in a bogus â€œPUL Prestigious Awardâ€ ceremony recently.

On Feb 13, Grayfield, along with several other Liberian Journalists, attended a program honoring Ceebee C.D. Barshell with a dubious PUL Prestigious Award as educator of the year. The event was organized by the National Publishers and Broadcasters Association.Abdullai Kamara, the PUL president, said the Union was shocked when it learned about the issuance of a PUL Prestigious Award by a group known as National Publishers and Broadcasters Association of Liberia on Feb. 13. Abdullai Kamara, the PUL president, said the Union was shocked when it learned about the issuance of a PUL Prestigious Award by a group known as National Publishers and Broadcasters Association of Liberia on Feb. 13.

Kamara said the Grievance and Ethics Committee immediately launched an investigation into the matter while disassociating itself from the bogus â€œPUL Prestigious Award.â€

Kamara noted the Press Union of Liberia was not involved in the organization of this event and does not grant any such award.

â€œThis event has the [potential] to bring the union into disrepute. We have forthwith gathered available evidence to be shared with the Grievances and Ethics Committee for further scrutiny, investigation and recommendation,â€ added the PUL president.

On Feb. 17, the Grievance and Ethics Committee chairman, Frank Sainworla, invited Grayfield to an urgent meeting following a complaint to the unionâ€™s president.

In his letter to the suspended vice president, Sainworla cited Article 15 Section 1(a) of the PUL constitution. The constitution notes, â€œThe duties of the Grievance and Ethics Committee shall be to enforce the code of ethics of the union, which shall be approved by the membership at a regular meeting to govern the professional conduct of members.â€ Sainworla said this section of the constitution provided the motivation behind the committeeâ€™s investigation of the counterfeit award. After two days of thorough investigation, Grayfield was handed a two-week suspension for unethical transgressions on Feb 19. The penalty also required Grayfield to write an open letter of apology to at least 30 local media outlets.

The committee described Grayfieldâ€™s action as â€œmisguidedâ€ on the count that the PUL does not even recognize the National Publishers and Broadcasters Association. Grayfieldâ€™s actions have smeared the PULâ€™s brand by purporting that the union organized such an award.

The committee wrote to Grayfield, â€œAs a member of the unionâ€™s leadership, much more is expected of you to fulfill the spirit and intent of the PUL Code of Conduct and Ethics.â€

In the letter, Sainworla gave a detailed account of the penalties, â€œThe Grievance and Ethics Committee is reprimanding you to set example in order to avert future reoccurrence from any other quarter, after investigating the matter.Â  Therefore, all the members present at the February 18 hearing resolved by the following actions:

The suspended vice president said he would challenge the decision from the committee as he believes he was not given due process. Mr. Grayfield said the PUL needs to hear from all parties before reaching any decision.

Sainworla indicated that the PULâ€™s Ethics Committee is also probing other members of the union who participated in the bogus award ceremony. The committee warned members that it would not hesitate to crack down on those engaging in actions that undermine the professional integrity and credibility of this entity.

At the same time, the Reporters Association of Liberia (RAL) has also suspended with immediate effect its Secretary General, Boima JV Boima of the organization. According to the president of RAL, Keith Morris, Boima’s suspension is in connection with his alleged involvement in the controversial award made in the PULâ€™s name.

The suspended Boima has been asked to submit to an inquiry from a team of RAL members. Morris has constituted a four men team to probe the situation. Those appointed are Festus Poquie, Samuel Diggs, and Samedora Wilson.

Meanwhile, a member of the PUL, Octavin Williams has taken serious exception to the two weeks suspension given to Grayfield.

Williams, theÂ publisher of the Nation Times newspaper, said the action of the suspended PUL vice president amounts to criminality and as such the committee should have handed down a heavier punishment. He pointed out those penalties are meant to serve as deterrents. He added â€œthe penalty should be more than the crime that was committed.â€

Williams alleged that the Grievance and Ethics Committee have sold the integrity of the Press Union of Liberia.