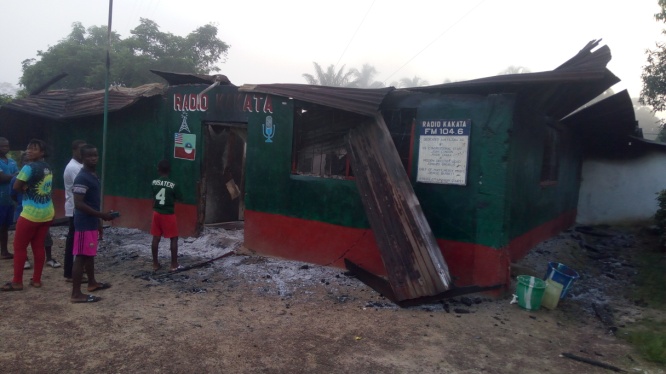 KAKATA, Margibi â€“ Radio Kakata FM 104.6 MHz, one of the nine community radio stations operating in Margibi, was gutted by fire on the morning of Friday, October 28.

The fire destroyed all of the stationâ€™s studio equipment including two 100 and 300-watts transmitters. The fire also burnt down the roof of the six-room building to ashes, leaving several cracks in the walls, which have started causing other parts of the building to fall.

The stationâ€™s acting manager, Samuel Borbor, spent the night at the station along with two of his colleagues during the time of the fire. He said the flames started from the main broadcast studio before subsequently spreading to other parts of the building.

â€œWe sounded off transmission by 12:00 a.m. and switched off all the equipment, but to my surprise by 1:55 a.m., my two colleagues began shouting that the building was on fire and we ran out as the building was already in flames,â€ Borbor said. Radio Kakata was established in 2004 with funding from Mercy Corps and USAID. Photo: Emmanuel Degleh

He put the cost of the damage at over US$26,000 and launched a call to relevant stakeholders and philanthropic organizations to aid Radio Kakata, given the critical role the station could play in the upcoming 2017 elections.

Borbor also expressed his dismay over the situation given that he had taken over as acting manager barely two months prior. The former station manager, Elvis Gono, was suspended by the advisory board for alleged financial misapplication. Meanwhile, Margibi Superintendent John Buway has called for an immediate investigation into the circumstances that led to the fire at the station.

â€œI must firstly express my regrets over the situation and I have ordered an investigation immediately into this issue,â€ he said. â€œThis is the third time for a community station to be destroyed by fire in this county and we will not allow this go unnoticed.â€

The superintendent has pledged the county administrationâ€™s support to the rebuilding of the station but noted that the outcome of the investigation will be important before any funding can be appropriated for the restoration of the local station.

In the wake of the probe, both the police and the fire service have begun interrogating people they consider as persons of interest in the disaster.

The station is among 17 community radio station set up in January 2004 by Mercy Corps with funding from USAID. The station has, however, suffered a series of leadership crises, with the latest involving the forceful removal of at least three of its former managers.